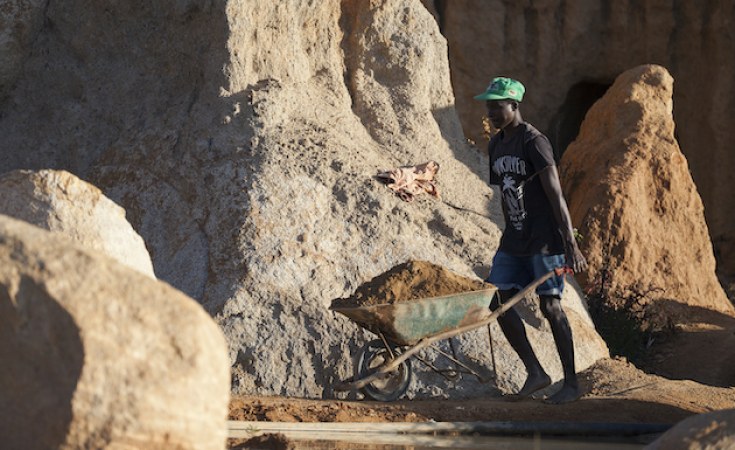 SAND poachers have invaded Zinyengere Cemetery in Epworth, exposing coffins and remains of the deceased, while also creating pits in the graveyard from which desperate people are fetching water.

Sand poaching has become rampant in Epworth and other areas in Harare, but the invasion of the cemetery has shocked many residents.

The sand poachers are randomly digging pits in the graveyard, sometimes exposing remains of the dead, as witnessed by a crew from The NewsHawks which visited the scene.

Rather than evicting the sand poachers, the Epworth Local Board has moved in to fill the pits with garbage. Residents who have tried to discourage the sand poachers have been intimidated or attacked by the marauding groups.

“Some pits are now being used to trap drinking water as the community has no water to use’’ said Sheila Dance, an Epworth resident, who is making a living from collecting garbage from the pits in the cemetery.

Epworth Local Board secretary Wilton Manda said the local authority is doing all it can to stop the sand poachers.

“The problem is that sand poaching in Epworth is being done early in the morning, during the night or during weekends, when there are no people around. In the afternoon you barely see them,” Manda said.

“We are going ahead trying to stop them because they are not supposed to be doing so as it is not under the law in Zimbabwe.’’ Epworth mayor Gift July said the Environmental Management Authority (Ema) and Epworth Local Board officials have conducted joint raids several times but the poachers and brick moulders have persisted because of economic hardships. He said the board was dumping rubbish in the pits as part of reclamation efforts.

“On the graveyard issue, we have applied for land, and plans are at an advanced stage to establish a new cemetery close to Glenwood extension,’’ he said.

Ema’s Harare provincial environment manager Robson Mavondo said the agency, board and police have been battling two types of offenders in Epworth.

“The issue of graves which have been exposed, it’s an issue for the local authority. It’s not under our mandate.’’

According to Ema, the statutory body responsible for ensuring the sustainable management of natural resources and protection of the environment, approximately 1 694 hectares of land are affected by sand-poaching in Zimbabwe, with Harare contributing more than 850 hectares of the statistic.

There are also reports that some top municipal officers are turning a blind eye to poaching because of corruption.

Sand and clay poaching has been recorded by Ema as one of the major drivers of land degradation in Zimbabwe’s urban, semi-urban, rural service centre areas, as well as at growth points, mainly due to construction activities.

Harare and Bulawayo have the worst incidences of illegal sand poaching, with the authorities calling for more deterrent sentences in order to ward off poachers.