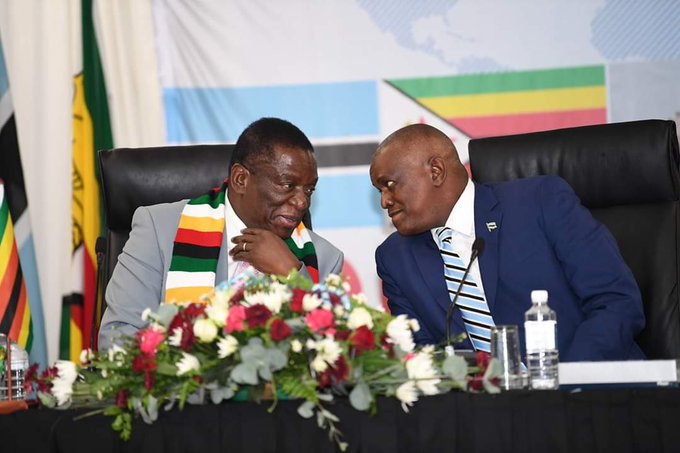 ZIMBABWEAN President Emmerson Mnangagwa and his Botswana counterpart Mokgweetsi Masisi clearly have many things in common — the hounding of political foes out of the country and the silencing of critics being some of their tactics.

Masisi touched down at Robert Mugabe International Airport last week and his speech read like a loyal student of the Zimbabwean leader and a proud follower of Zanu PF.

“Botswana continues to call for the removal of sanctions against Zimbabwe,” Masisi told dozens of Zanu PF supporters who gathered to welcome him.

“We just came from our elective congress, and Zanu PF was represented very well. The two ruling parties have relations, we are friends,” the Botswana leader said, with Mnangagwa clapping while standing next to him.

For a country whose previous leader, Ian Khama, was vocal against the human rights violations perpetrated by president Robert Mugabe’s regime, many pro-democracy campaigners felt Masisi would continue on that path of advocating for people’s freedoms, but his speech betrayed them.

In the process, Masisi has created for himself a number of enemies in both Zimbabwe and in his own country for siding with a Zanu PF regime criticised by many for human rights violations.

“The ED-Masisi alliance is an alliance of authoritarian leaders as Masisi has essentially been hounding his predecessor (Ian Khama) out of Botswana. He has also been taking a strong stance on the media and political rivals,” political analyst Rashweat Mukundu said.

“To me it is a bad sign and omen for the region that a democratic country like Botswana is unfortunately learning the art of authoritarianism from Zimbabwe,” he added. He said there was nothing productive to come out of the relations between the two leaders. “There is nothing productive to see out of this other than supporting each other in their schemes to oppress the opposition and disregard human rights.”

He said Masisi ought to learn from former Botswana presidents Festus Mogae and Khama and be cautioning Mnangagwa on economic misgovernance and human rights abuses. Botswana is home to thousands of Zimbabwean economic refugees, a development Mukundu said was confirmation of crisis in Zimbabwe.

During his presidency, Khama took a firm stand in protecting the rights of Zimbabweans and clashed often with Mugabe who accused him of pursuing a Western agenda. Masisi also was blasted by the Botswana Congress Party (BCP) that accused him of taking a partisan position in supporting Zanu PF while on a state visit.

“President Masisi’s attempt to absolve Zanu PF and President Emmerson Mnangagwa from the Zimbabwean crisis is not only an affront and insult to the suffering people of Zimbabwe, but it is also an attempt to revise history in the most deceptive way,” the party said in a statement.

The party further called upon Mnangagwa’s government to introduce the “necessary reforms that will allow for true democracy to thrive”.

“Repression of political opponents and intimidation of those that challenge the Zanu PF regime should be condemned in the strongest possible terms,” the neighbouring country’s opposition said.

Like Mnangagwa, Masisi was deputy to Khama for four years and appeared to have good relations, but they ultimately clashed. Mnangagwa was deputy to Mugabe until the November 2017 military coup that saw dozens of Mugabe loyalists fleeing to safety in various countries.

Khama has also fled Botswana and has been in South Africa since November last year. The former Botswana president recently told Eyewitness News that his successor, Masisi, was using law enforcement structures to purge political foes.

His home was raided following claims that he had illegally obtained firearms, allegations he denied. “In recent times, members of his party are the ones who have been arrested and are unlawfully detained.  A member of Parliament had to be released by the High Court from unlawful detention,” Khama was quoted as saying.

Khama has also previously accused Masisi’s administration of a plot to have him killed.

While all the accusations are placed on Masisi in Botswana, the Zimbabwean opposition blames the Mnangagwa administration of violations, including arbitrary arrests and detentions without trial of political foes.