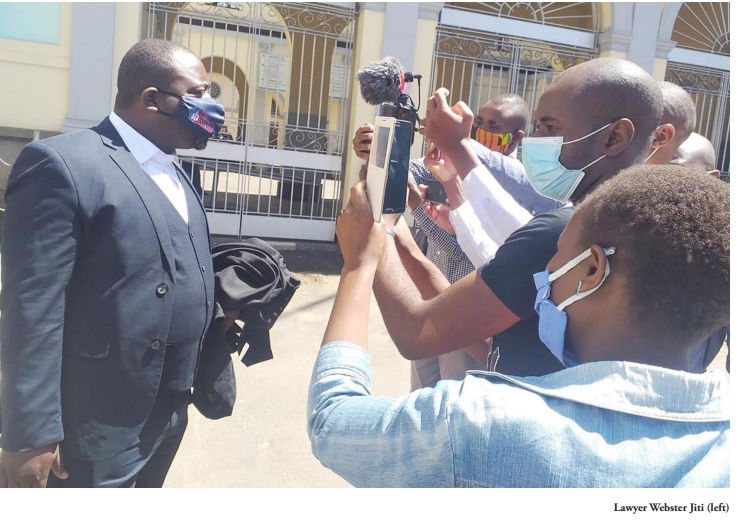 REPUTABLE financial advisory services firm PriceWaterhouseCoopers (PwC) South Africa, part of the international PwC accounting and consultancy network, is caught up in an auditing scandal over the controversial takeover of regional sugar-producing giant Tongaat Hulett by Zimbabwean tycoon Hamish Rudland in a deal involving US$267 million.

In a major regional corporate boardroom coup, the Rudland family last week seized control of Tongaat, which has operations in South Africa, Mozambique, Botswana and Zimbabwe, through their Mauritian-registered entity Magister Investments Ltd, amid resistance by minority shareholders who protested that they had not been sufficiently informed about the Rudlands and their financial dealings and capacity.

As exclusively reported by The NewsHawks last week, the deal came against a backdrop of serious problems, including a new auditing scandal which has exploded in the Zimbabwean High Court.

PwC South Africa is accused of collaborating with Tongaat executives to commission an unprocedural, unprofessional and illegal audit, while also using the irregular process to pursue personal vendettas to eliminate unwanted top management figures to undervalue its assets in Zimbabwe and knock down the overall value of the company to facilitate a takeover by the Rudlands at a bargain.

The audit, used as part of the corporate raiding process in the US$267 million (R4 billion) rights issue that enabled the deal, is being challenged on a number of fronts, including on procedural, professional and jurisdiction grounds.

The massive rights offer, well above the company’s market capitalisation which is less than US$66 million (R1 billion), was underwritten to the tune of US$133 million (R2 billion) by the Rudlands.

The Rudlands, Hamish together with his brother Simon, run a sprawling business empire in Zimbabwe and the region straddling transport and logistics, financial services, agriculture and tobacco.

Hence their latest controversial acquisition has ramifications which reverberate across the region.

The latest audit scandal comes at a time the regional sugar giant — which has a significant asset base and footprint across southern Africa, is struggling to emerge from another scandal involving audit firm Deloitte misstated its financial position by R2 billion (US$800 million).

Deloitte, which has been the company’s auditor for many decades, signed off on the irregularities in its financial statements from 2011 to 2018. The fraudulent process inflated Tongaat’s financial position by almost R12 billion.

Trading in the company’s shares was suspended in 2018 after news of the irregularities sent its shares into free fall.

Tongaat has launched legal action against Deloitte over that.

The company also confirmed it is filing a R450 million (US$30 million) civil claim against some of its former executives — including former CEO Peter Staude and former CFO Murray Munro — for inflating profits.

Back in Zimbabwe, Tongaat is mired in a messy court battle over a controversial PwC forensic audit on its local subsidiaries, Zimbabwe Sugar Sales (Pvt) Ltd and Hippo Valley Estate Limited.

In a court application filed at the High Court of Zimbabwe in Harare by Jiti Law Chambers, run by top Harare lawyer Webster Jiti, former Hippo Valley Estates Limited financial director and Zimbabwe Sugar Sales (Pvt) Ltd non-executive director — who was also the board’s audit committee’s chair — John Edward Chibwe — says Tongaat authorised an illegal, fraudulent and sham audit by PwC to witch-hunt him and others, while covering its tracks on illegalities it had committed.

Leave to bring peregrine South African companies — Tongaat, PwC Advisory Services and PwC South Africa — to court in Zimbabwe was sought by Jiti and granted before the application was filed.

This followed the PwC audit in which Chibwe was accused of aiding and abetting a bulk sugar sales deal in which prices were fraudulently inflated for corruption.

Chibwe is challenging the audit in its entirety.

The challenge is coming at a time Tongaat executives are accused of fraudulently stripping value and assets in Tongaat subsidiaries, including land, through irrational write downs of assets to facilitate the takeover, according to company officials.

“The bulk of the R12 billion Tongaat write downs were in  Zimbabwean subsidiaries and was a result of the PwC forensic audit which is now the subject of a court challenge. Ironically, while Tongaat’s market capitalisation is approximately US$66 million, the market cap of Hippo in which its interest is just under 51% is currently about RTGS$50.2 billion. Triangle, if it were listed, would have commanded a higher value than Hippo of perhaps no less than US$350 million due to its wider asset base, enhanced revenue base and high profitability,” a senior Tongaat official told The NewsHawks.

“The PwC audit itself upon which the rights issue hinged is a scandal. It may not be surprising that the value-stripping process was deliberate and well-calculated; one cannot rule out involvement of Tongaat top management in the takeover manoeuvres behind the scenes through the questionable rights issue. In this whole deal it’s the minority who have lost out the most. The rights issue is not taking into account the true value of the company in its subsidiaries.”

Company executives questioned why the audit missed glaring fraudulent transactions, suggesting they were meant to hide malpractices by Tongaat as part of the takeover deal.

“The 2% of gross proceeds of annual sugar sales payable to Tongaat over the years by Hippo Valley under the guise of technical fees (which were never rendered) was never flagged by PwC in its forensic audit. Crucially, other malpractices between Hippo and Triangle wherein Hippo would borrow money it did not need in the first place from Triangle and pay it back with interest above bank rates were not unearthed by PwC, raising more questions than answers,” the executive said.

In his founding affidavit, Chibwe says the contentious PwC forensic audit did not meet the basic minimum standards.

“I aver that a forensic audit investigation report by its very nature is an authoritative document which is an outcome of an unbind process that seek  to uncover the modus operandi of a corporate and/or individual person’s misdoings, fraud, fictitious transaction embezzlement etc, expressing the testimony of an expert regarding a matter which may be the subject of legal proceedings. It is a very important document of immense authority. Therefore, the process and validity of the input to the process and resultant audit report are key in determining the legal standing and admissibility of the forensic investigation report in any legal proceedings,” he says.

Chibwe, however, says required steps in initiating a forensic audit at Zimbabwe Sugar Sales and Hippo Valley were not followed, including ensuring that the exercise is sanctioned by the board’s audit committee through an engagement letter that sets out the terms of reference, scope of work and key deliverables signed by the audit committee chairperson.

He says according to the companies’ procedure the auditors are then appointed through the audit committee after a selection process and confirmation of the auditors’ independence and possible conflict of interest.

“This again was not done and for the avoidance of doubt no such deliberations took place in the run-up to the investigation done by 4th and 5th respondents (PwC Advisory and PwC South Africa respectively),” Chibwe says.

Chibwe also adds: “As a matter of fact, auditors are enjoined to gather evidence, review and analyse all relevant document that is, reports, minutes, agreements among other things. This clearly eluded 4th and 5th respondents.

“The auditors must quantify the amount of loss suffered and determine the parties’ involvement and liability and the resultant conclusions by the auditors or investigators must not be based and/or based on speculation or conjecture. This was never done.

“Upon completion, the forensic audit report should be presented to the audit committee and subsequently to the board of directors by the audit committee chairman; this again was done in the case of the 1st and 2nd respondents. This was clearly a hatchet job.

“It is shocking that 4th and 5th respondents did not examine, review nor analyse all the relevant documents relevant to the operations of 1st and 2nd respondents. Through their Trevor White they failed to contextualise issues and the rationale thereof. They made no attempt to review. Board minutes which sanctioned certain decision and heavily relied on emails, which were never contextualised. In fact, the emails used in the purported forensic audit were a selection of emails and not all the emails relevant to the subject matter were used.”

He also says PwC confined themselves to selected emails and interviews of only a few, resulting in uninformed conclusions.

“Fourth and 5th respondents, through Trevor White failed to appreciate that companies are legal entities represented by their boards and their decisions are made collectively and that decisions are reflected in appropriately documented minutes, resolutions and reports,” he says.

Chibwe rebuts and rejects the findings which found him guilty of wrongdoing on bulk sugar sales and nails him on contested financial issues.

“The 1st respondents bulk sale was introduced by 3th (Tongaat) respondent in the context of group practices. At the instigation of 3th respondent and on the back of the 4th and 5th respondent forensic audit, the transaction was classified as fraudulent and was treated as irregularity in 2nd respondent’s financials and adjusted as a prior period error.

“Surprisingly, a similar transaction conducted by 3rd respondent [as group practice] under the South Africa Sugar Association [SASA was treated bone fide and continue to be recognised [In terms of ISA 18 : Revenue] and adjusted for in 3rd Respondent’s financials as an accounting policy change for the year ended 31 March 2019. These are shocking double standards.”

This has left PwC deeply involved in the messy Tongaat deal which has left a sour taste over the sugar transaction.