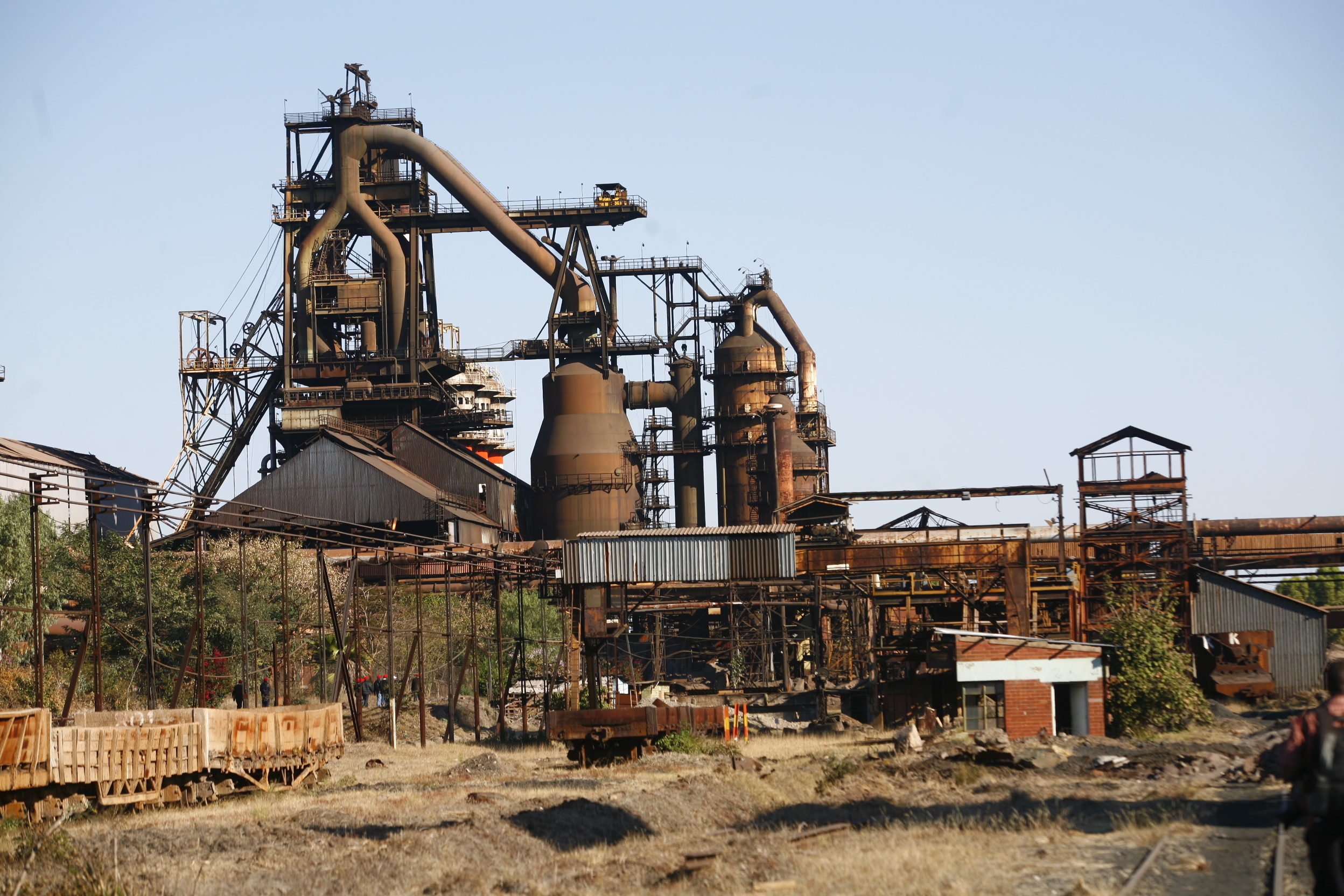 MANUFACTURING firm ZimCoke bosses believe they were better placed to resuscitate and acquire assets of the now defunct state-owned Zimbabwe Iron and Steel Company (Ziscosteel) than the recently announced US$1.3 billion Kuvimba Mining deal which they maintain is a pipe dream, sources familiar with the transaction have said.

Documents gleaned by The NewsHawks show that ZimCoke (Private) Limited, fronted by President Emmerson Mnangagwa’s adviser Eddie Cross and his son-in-law Gerald Mlotshwa’s transaction which collapsed had made considerable progress towards Ziscosteel resuscitation.

In a letter addressed to ministry of Finance debt management officer John Mafararikwa on 11 September 2018, ZimCoke said the company had secured US$200 million investment to commence operations.

“It is now four months since ZimCoke completed the survey required to identify the boundaries of the ZimCoke Steel amounting to US$200 million, the investment of US$130 million in the plant itself, another US$17 million in railway capacity and infrastructure and US$35 million in Hwange Colliery to ensure the supply of a million tonnes of coking coal to the plant for 35 megawatts on site and the complete refurbishment and expansion of Zimchem (Private) Limited including the assumption of their accumulated liabilities of US$50 million,” reads the letter.

The ZimCoke deal was signed in 2017 and approved by cabinet but later cancelled by the Zisco board and government in 2020 amid accusations that it was not approved by the board and amounted to asset-stripping.

ZimCoke held its ground-breaking ceremony on 26 July 2018 attended by Zisco board members and the ministry of Industry.

The letter also reveals that ZimCoke had faced major headwinds in its bid to occupy the Ziscosteel site in Redcliff before the dramatic turn of events.

“Would you please note that ZimCoke (Private) Limited, a company to which I consult, has been prevented from taking up the occupation of the site of the ZimCoke Project in Redcliff by the Directors and Management of ZiscoSteel Limited. This obstruction has now gone on for several months,” reads the letter.

ZimCoke further complained that delays were resulting in higher local costs of production.

“This threatens the recovery of the railways who will benefit from the 2 million tonnes of bulk traffic they will handle when ZimCoke is operations. In addition, the new sales of Hwange Colliery of US$60 million a year will be a lifeline to the company and its 2 400 staff. I would also point out that Redcliff has been without water for a year, and this threatens the health of its 50 000 inhabitants and the companies located there,” the letter further reads.

Zimbabwe’s plan to develop one of the world’s biggest platinum mines stalled after Impala Platinum demanded greater transparency on the ownership of Kuvimba before considering a joint venture.

However, Kuvimba failed the transparency, accountability, and corporate governance test as it could not disclose some of its ultimate beneficial shareholders.

It is common cause that some of Kuvimba’s mining assets are those which were owned by local tycoon Kudakwashe Tagwirei – who is on British and American sanctions – through Sotic International. Tagwirei also owns Sakunda Holdings.

Impala, the third-largest producer of platinum group metals, was approached by Great Dyke Investments, which owns the Darwendale project, for a joint-venture, but Kuvimba failed to clarify its opaque shareholding.

Kuvimba and Russian tycoon Vitaliy Machitskiy’s Vi Holding each own 50% of Great Dyke.

Further, Kuvimba, which has not yet fully paid for Mazowe and Red Wing gold mines owned by Metallon Corporation despite claiming to have paid a dividend last year, is one in a series of companies in the past 15 years to come making noise about Zisco’s revival without much delivery.

Cross, a ZimCoke board member and shareholder, and Mlotshwa, lawyer and transaction adviser, tried but failed to push through their controversial steelworks deal. ZimCoke was chaired by Nicholas Ncube.

After a frustrating process, Cross threw in the towel in September 2020. Mlotshwa persisted, but the deal was subsequently cancelled.

Sometime in 2017, Zisco entered into an agreement with ZimCoke to sells its assets for a nominal US$1 on condition that the latter would pay the former’s US$225 million debt to German bank KfW Ipex-Bank Gmbh.

The full inventory which ZimCoke wanted entailed: coke batteries No. 1, 2, 3 and 4 together with by-products plant and all associated machinery and infrastructure; coal-handling facilities in their entirety inclusive of rail lines; conveyor from local coal handling plant to coke batteries; shares in ZimChem; gas holders; P&D offices (renamed The Revival Centre by Essar) with contents; coke plant offices and workshops inclusive of contents; roll design building and contents; coke and coke breeze storage areas; slag and skull dumps with land and contents; coke and coke rail wagons at Zisco and National Railways of Zimbabwe Dabuka, although Zisco would remain responsible of NRZ storage charges; houses and water rights at Kwekwe River among other aspects.

Even though it stopped working in 2008, Zisco, 89% owned by the government and the remainder by private shareholders, retains huge residual value.

It provided a lifeline to various companies in the value chain and industry, hence remains the biggest missing link in the Zimbabwean economy. The company used to produce mainly for the export market, earning the country millions of US dollars.

Its linkages with ZimAlloys (for provision of ferrochrome), Hwange (for coking coal), NRZ (for transport) and Zesa (electricity) ensured it was one of the economy’s main locomotives.

Various companies that relied on Zisco for production purposes had to close, downsize, or switch to uncompetitive imports for survival. These include Sable Chemicals, ZimChem, Ripple Creek Mine, Zimasco, Steel Makers, Haggie Rand and ZimCast.

Zisco was founded in 1942 as Rhodesia Iron and Steel Commission, the largest integrated steel plant in Africa. By 1957, it was producing 257 166 tonnes of steel per year. At Independence in 1980, it was renamed Zisco and employed over 5 500 people, which peaked at 8 000.

But the company was later destroyed through extended periods of mismanagement, corruption and incompetence.

A 2006 audit report and media reports showed the company was looted by politicians, senior management and their cronies through controversial contracts parcelled out to conflicted parties, airfares, hotel bookings and food for politicians and extortionate directors’ fees, salaries, and allowances.

By 2008, the company was now producing less than 12 500 tonnes which were way below the break-even point of 25 000 tonnes per year. Plant breakdown became very routine with a single blast furnace providing the lifeline.

Debts mounted and scaled US$340m, even reaching US$500m by some estimates, with the German bank owed US$240m.

In 2006, Global Steel Holdings from India proposed to invest in Zisco, but the deal collapsed due to political interference and clashes over the funding model. In 2011, a US$750m deal was struck with Essar Africa Holdings, also from India, to form New Zimbabwe Steel Company. Essar would assume 54% shareholding while the government retained a 36% stake and 10% remained in the hands of private investors.

However, the deal fell through in 2015 over iron ore deposits. A deal with Chinese company Guangzhou R&F followed in 2017.

Other investors that expressed interest in Zisco in the past include ArcelorMittal, the world’s biggest steelmaker, Jindal Steel, China Metallurgical Group, Apollo Steel, Posco, Gateway Zimbabwe and Sovereignty Capital.

Then came ZimCoke and now Kuvimba, which are both associated with Mnangagwa’s cronies.

Kuvimba, which is opaque, has already failed an Impala transparency test, which raises questions as to how it will succeed at Zisco when it ignores basic corporate governance and transparency requirements.

Dark days back for Zim