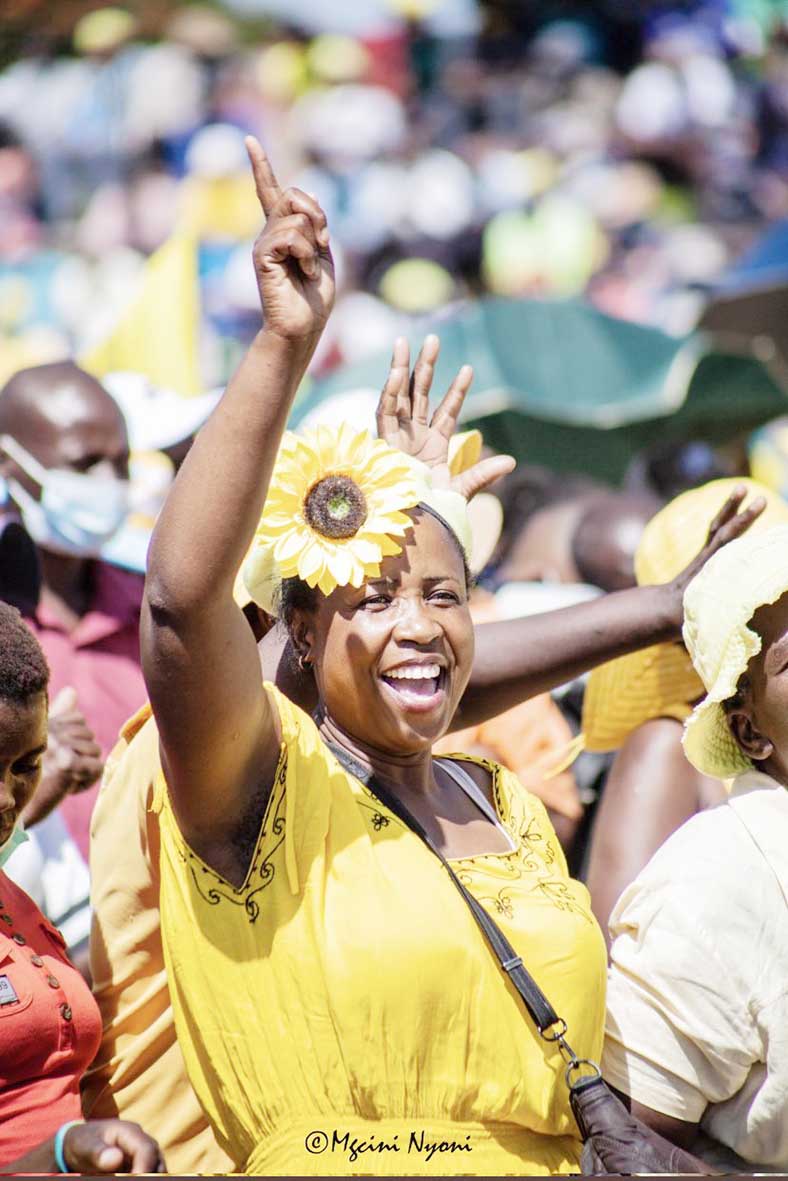 A yellow dress and headgear that blends in a fascinator shaped like a sunflower — symbolising optimism — complete her look.

With her index finger stuck in the air, reminiscent of a Sudanese female protester whose image went viral in 2019 during the ouster of former President Omar Al Bashir, the unidentified Citizens’ Coalition for Change (CCC) supporter’s image has stimulated debate online.

Superbly shot by Bulawayo-based photojournalist Mgcini Nyoni, the picture speaks to Zimbabwe’s aspirations of a better tomorrow after nearly 42 years of turmoil.

Of all the photographs he took on the day, this image stood out as it received rave reviews.

A picture tells the story of a thousand words. The adage rings true as several images from the campaign trail ahead of a crunch 26 March by-election communicate deep political meaning.

While the woman is still to be identified, the iconic picture has inspired many Zimbabweans, home and abroad.

The image has been described as iconic by lawyer Alex Magaisa.

“Once in a while there is an image that assumes iconic status because of the manner in which it captures an historic moment. This is one of them. The author is Mgcini Nyoni. It will make history books,” Magaisa said on Twitter.

“This portrait penetrates the heart and soul. Who is this lady?” asked Shelton Mununuri on Twitter.

The Bulawayo image is among many iconic photos on the CCC campaign trail speaking to the immense goodwill the new party led by Nelson Chamisa currently enjoys.

Chamisa’s new political outfit, born out of a wrangle over the MDC-Alliance name and years of bickering, has stood out as Zimbabwe’s main opposition party, drawing large, animated crowds across the country.

Despite several headwinds, it is apparent that the party commands spontaneity as witnessed in photos exuding joy and enthusiasm.

A student of Zimbabwe’s Independence history would recall an unforgettable image of women dancing when the country was born in 1980.

With jerseys strapped around their waists, they leapt for joy as Zimbabwe attained Independence from Ian Smith’s oppressive regime.

The image is forever etched in Zimbabwe’s history, as an iconic kodak moment that communicates a deep sense of hope that swept across the country when the Union Jack was finally lowered, giving way to the Zimbabwean flag.

Synonymous in these photos is the participation of women in political process as they are no longer seen as subaltern but active participants in national discourse.

Reminiscent of the Sudan student and Nubian queen, Alaa Salah, draped in white linen leading a protest against AlBashir in 2019, images of defiance have also surfaced in Zimbabwe.

Imagine posing for a photo in front of armed anti-riot police and living to tell the tale.

Such is the story of an unidentified Marondera woman who dared pose for a photo with the feared riot police last Saturday after her party was banned from holding a rally at Rudhaka Stadium.

While her fellow activists sang and danced, she chose a defiant stance.

Her image is among many of women activists in Marondera who challenged police decision to block the rally where thousands had gathered to hear their leader Chamisa speak.

Although she could not make it into the stadium, she made a bold statement.

While she was daring the police who remarkably exercised restraint during the long afternoon of insults from CCC supporters, her counterpart spewed stern words at the authorities.

“We are saying we no longer want Zanu PF and if you — the police, CIO and soldiers — say no, don’t you want US dollar salaries? Most of you married because of the inclusive government when Biti was Finance minister,” shouted one woman.

Previously on the CCC’s campaign trail, it was Madzibaba Veshanduko with his apostolic antics who stole the show. But in Marondera it was the brave women — with their protest songs and defiant poses — who made a lasting impression.

Although they did not make it into the stadium, their shear fearlessness captured the hearts of many passers-by.

The women led a standoff between CCC supporters and police on Saturday.

With Chamisa arriving to wild cheers, the female supporters remained unfazed, venting out their frustration at the police.

The Marondera rally was one of the many campaign gatherings that have been thwarted by the police in recent weeks, with the authorities maintaining that the gatherings were unlawful.

Despite the move to stop the rally, Chamisa’s tone was reconciliatory, urging supporters to respect the authorities.

Until Zimbabwe matures as a democracy and allows political opponents to campaign, these women will continue to be the voice of defiance and a symbol of hope for a generation whose time has come.