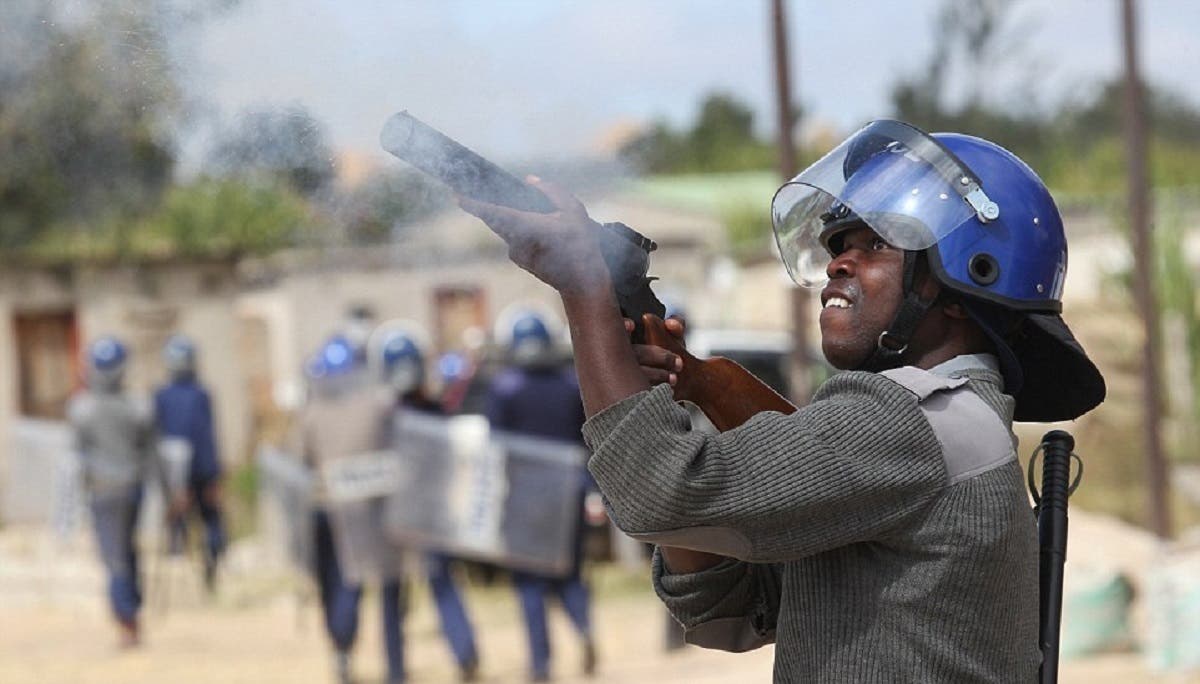 …emotions as troubled Zimbos vent out on cops

DOZENS of armed police officers, two water cannons commandeered from Harare, three smaller trucks and two dogs — all belonging to the Zimbabwe Republic Police — lined up to barricade the entrance to Rudhaka Stadium last Saturday where opposition supporters were gathered, in scenes described by analysts as signaling the country’s return to the dark days.

The stadium resembled a war zone with police insisting they were working on orders from above, refusing to let Citizens’ Coalition for Change (CCC) leader Nelson Chamisa address party supporters despite the 44-year-old politician’s attempts to engage the officers.

Analysts said the behaviour of the police was confirmation of the continuation of heavy-handedness despite President Emmerson Mnangagwa’s reassurances that he would chart a different path to the late former president Robert Mugabe’s authoritarian rule.

Chamisa was disqualified from addressing the swelling crowd after police said he failed to satisfy the dictates of the Maintenance of Peace and Order (Mopa) but, curiously, Zanu PF and the opposition MDC-T continued with their programmes unhindered.

The heavy police presence, analysts said, resembled a war-zone and one could be forgiven for thinking that the heavily armed police were on a mission to subdue a dangerous militia. The heavy-handed treatment of the main opposition as though it were a banned organisation has exposed Mnangagwa’s administration for failing to move beyond Mugabe’s shadow.

“It cannot be politics as usual when Zanu PF wants to contest on its own. The behaviour of banning rallies of opposition in the 21st century is archaic and pathetic,” political analyst and academic Alexander Rusero said.

“It is unheard of in the 21st century where the ruling party still perceives opposition as enemies. It is tantamount to saying we are at war, which is not progressive,” he added.

Rusero said the banning of CCC rallies was a validation of claims that Zanu PF is suffering from internal contradictions.

“It actually confirms the internal contradictions within the Mnangagwa government. On one hand, you have a regime that wants to posture as a progressive, outward-looking, opening up, engaging and all, but on the other you still see the dark side of the erstwhile era. You still see the appetite to muzzle the media, muzzle civil society and the opposition and close all the democratic space,” he said.

“What we are witnessing is the perfecting of a competitive authoritarian regime which thrives on trying to posture to the world that it has everything in place, including some semblance of opposition, yet in essence it is not even prepared to relinquish power even if it loses elections.

“The politics of the 21st century is a competition of ideas. Those ideas that make sense will win it.”

He said the Mnangagwa regime is showing an insatiable appetite for power accumulation and consolidation.

“But it needs to be creative in doing that,” Rusero said.

“A government that does not derive consent from the people, even if it is an authoritarian regime, is not sustainable and it will not last long.”

Analyst Rashweat Mukundu said the police were working under political instruction to block Chamisa rallies and this is indicative of panic within the ruling party.

This is despite Vice-President Constantino Chiwenga’s claims that the ruling party had no hand in the rally ban.

“There is every indication that the police is working under political instruction in banning CCC rallies and the excuses are inexcusable,” Mukundu said.

“These are politically conjured excuses that deny the political supporters of Nelson Chamisa their right to freedom of association and movement.

“What we are seeing is (that) the Mopa law is as bad, if not worse, because it is insidious in its denial of political rights as compared to the Public Order and Security Act (Posa).”

“When this is happening at a time Zanu PF is allowed to roam around the country as it pleases, it raises a lot questions on the fairness and freeness of the electoral playing field in Zimbabwe and what we may see are nasty confrontations between the supporters of CCC and the security agents.

“You can make a guess that the police are provoking the CCC supporters to react so that they effectively ban political activity by the opposition. This is part of the strategy to provoke them to react and they beat or shoot. This is one clear indication that we are back, if not in a far worse, political environment than we were under Robert Mugabe and there is nothing reformist about this new administration.”

“The thing is you can ban as many opposition rallies as you like, but if you have no track record on which you run, it will be you who lose votes rather than the opposition gaining them.”

This comes as observers insist there is panic within the ruling Zanu PF over the resurgence of Chamisa under the CCC movement. Chamisa has been attracting bumper crowds in all his meetings, posing a potent political threat to Mnangagwa’s three-year reign.

Mnangagwa’s time at the helm has been marred by a severe economic crisis, drought and continued incapacitation of civil servants, among other issues haunting the regime which fashions itself as the “Second Republic”.

Last week, Chamisa’s supporters refused to be intimidated by the police, telling them that their actions against the opposition were illegal.

So far, police have blocked Chamisa’s rallies in Gokwe, Binga and Marondera, citing non-compliance with Mopa. Where rallies have been allowed, the police have often put in place unreasonable roadblocks to stymie the free movement of people.

Curiously,  Zanu PF and MDC-T rallies addressed by party leaders Mnangagwa and Douglas Mwonzora respectively have been allowed to proceed.

The Crisis in Zimbabwe Coalition said the situation on the ground is providing sufficient evidence to the international community that the country faces serious challenges.

“Fellow Zimbabweans, let the world know of the rights violations ahead of the March 26 by-elections. Zanu PF and the police have teamed up against the opposition and this must be exposed.”

Related Topics:Electionspolice brutality
Up Next

Chiefs implore govt to assist as drought sets in