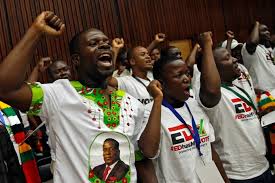 YOUTHS who want residential stands from Gweru City Council are allegedly being instructed by the ruling Zanu PF to produce their party membership cards, The NewsHawks can report.

Information gathered by this publication shows that Zanu PF youths from the Midlands applied for 500 stands and council allocated them the land five years ago.

Citizens’ Coalition for Change ward 10 councillor Charles Chikozho was mayor in 2017 when Zanu PF reportedly applied for the land which it said was intended to empower youths through access to housing projects.

Several youths from the Midlands capital this week alleged that they were being asked to produce Zanu PF membership cards whenever they ask about the residential stands.

Thousands of beneficiaries, including council employees, bought the stands that were availed in 2014.

Three contracted companies however started servicing roads at the housing scheme a few weeks ago following years of failure to provide valid environmental impact assessments to the Environmental Management Agency. Some of the stands are on wetlands and other inhabitable land.

“The request for Zanu PF cards intensified particularly prior to the 26 March Mkoba by-election. I went to enquire on the stands thinking they were for youth empowerment but was asked if l had a party card,” a youth who requested anonymity said.

Several other youths corroborated the story, saying Zanu PF is demanding to see her membership card whenever she asks about the residential stands.

Attempts by The NewsHawks to find out from the then mayor Chikozho on whether Zanu PF was allocated the stands in the first instance did not yield a clear picture as he was non-committal in his response.

“This question hasn’t been asked since l left office. What is the problem?” Chikozho quizzed this reporter.

Zanu PF’s losing candidate in the 26 March by-election, William Gondo, had not responded to questions sent to him at the time of going to print.

Critics have often accused the ruling party of vote buying ahead of next year’s general elections, especially through the partisan parcelling out of land, mine claims, money and income-generating projects.

Zanu PF however argues the move is meant to economically empower the masses.

Related Topics:GweruZanu PF Youth
Up Next

MDC-T on fire: Pressure piles on Mwonzora to leave power