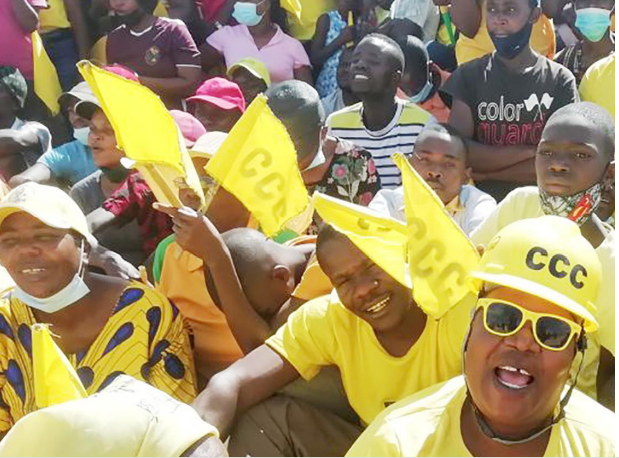 GWERU by-elections in which Zanu PF fielded the city council’s former acting chamber secretary, Gibson Chingwadza, who was fired from the local authority on multiple counts of corruption involving US$300 000, were marred by vote buying and intimidation while in some wards the opposition was barred from accessing voters resident at the premises of national security agents, The NewsHawks can report.

By-elections were held on 3 December and the electoral malpractices were a microcosm of the more virulent malady that afflicts national elections despite observer missions repeatedly urging the government to reform.

Chivhoko told The NewsHawks that households were given two kilogrammes of seed maize each while youths were plied with cash to intimidate opposition supporters, but the Zanu PF trickery did not work.

“They tried to intimidate us, but we were unfazed. The victory we got is for the people and I am now working on fulfilling promises that I made during campaigns. We are living in a country where after 42 years there is no electricity, water shortages are rampant and roads are in bad shape while our people are suffering from deep-seated corruption. The work ahead is very tough,” he said.

After the 2018 elections, the European Union observer team cited similar violations of the electoral code and urged the government to level the playing field, but the latest developments during the Gweru by-elections show nothing has changed.

In Gweru’s ward 18 where there was another council by-election, the opposition CCC was not allowed to campaign in the Zimbabwe Republic Police main camp, which is located in the ward.

The opposition party’s team ahead of election day was also barred from conducting door-to-door campaigns inside the Old Prison Complex, where a large number of voters reside. John Manyundwa, the CCC candidate who defeated Zanu PF’s Walter Makwalo in that ward, confirmed the developments.

“We had only one challenge, whereby he (Makwalo) was allowed to do door-to-door campaigns in the ZRP Main Camp and also had his posters displayed in the Old Prison Complex whilst I was denied by the authorities there. Lastly, they were pulling down my posters, destroying them daily, but I am happy it did not work,” he said.

Leaders of local residents expressed dismay on 3 November in the Midlands capital when district elections officer Joshua Mhino announced that Chingwadza had been duly nominated to stand in the ward 4 council by-election on a Zanu PF ticket despite his history of graft.

When he was suspended in 2020 pending a full disciplinary hearing that recommended his dismissal, Chingwadza doubled as estates and valuations manager.

He was found guilty of cases that included leasing of tower light stands to network providers without a council resolution, valid lease agreements and proof of rental payments. Council also proved that Chingwadza failed to put in place controls in the advertisement and disposal of commercial, industrial and institutional stands.

“You leased five tower lights or you caused five tower lights to be leased by council to Tower Resources for use as base stations for various network service providers with no council resolutions that approved the leasing, valid lease agreements or proof of rental payments. “The total prejudice to council is US$246 877.59,” read part of the charges.

Another section of the charges laid against him leading to his dismissal at Gweru council accused him of having: “. . . failed to take appropriate action to safeguard council assets and collect revenue due and you failed to put in place controls in the advertisement and disposal of commercial, industrial and insti tutional stands as the processes weren’t safeguarded enough to allow for more checks and balances. “Resultantly, due to fraud, theft or gross misconduct, council was prejudiced US$28 919.81.”

Council also charged Chingwadza for falsifying stand measurements, selling stands without following laid down procedure and converting land reserved for a golf course in Mkoba into five stands leading to council losing US$16 059.22.

On another charge, Chingwadza was said to have let Barna Gardens, a resort along Harare Road, operate without an updated lease, yet it was his office’s responsibility to ensure that such paperwork was in place.

He was also charged for being involved in the illegal sale of Kudzanayi Long-Distance Bus Terminus in which no proof of payment could be located.

The deal was later cancelled and a new private player roped in to develop the terminus. He was also accused of failing to keep proper and traceable documentation for land sales and proof from council also showed that the former chamber secretary would either inflate or reduce the cost of stands against council recommendations.

In the charges, council said Chingwadza would “. . . re-allocate, rename and replace stands without council approval”.

After having been found guilty and fired by the council disciplinary hearing, Chingwadza appealed to the Labour Court and lost the case. He has now taken the matter to the Supreme Court, seeking to be cleared of the convictions.

The former Gweru council boss did not respond to messages or answer calls when contacted by The NewsHawks for comment.

Larry Mavhima, the Zanu PF Midlands provincial chairperson, and party national spokesperson Christopher Mutsvangwa did not respond to WhatsApp messages sent to them for comments.