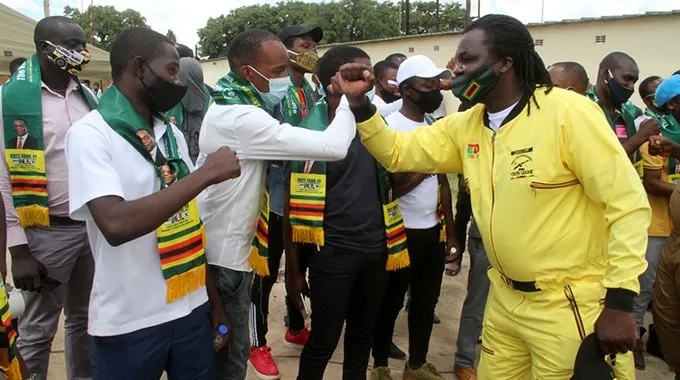 AS reported last week by The NewsHawks that a war is brewing in Zanu PF following last week’s divisive youth league congress that saw the party leadership imposing leaders instead of convening elections, the party’s new deputy youth secretary has confirmed the mayhem, as serious fights erupt in the provinces over lofty posts.

Thousands of party youths were left seething with anger last week and threatening to take the war back to their provinces, alleging tribalism and the stifling of democracy by bigwigs who blocked elections for top posts and chose to impose leaders in a process they described as based on “consensus”.

John Paradza from Masvingo province emerged as the new youth league deputy secretary in an opaque process described by youths from other provinces as unjust and reeking of tribalism.

On Thursday, Paradza confirmed the chaos in the provinces, but immediately warned that those fanning divisions will be dealt with by the party.

The crisis in the ruling party, insiders say, is precipitated by a political war of attrition between President Emmerson Mnangagwa and Vice-President Constantino Chiwenga.

“Zanu PF youth league has noted with concern, unfortunate and malicious reports on various social media platforms and in some newspapers alleging that there are votes of no confidences passed on some of its leaders in provinces,” Paradza said.

“Such reports are most unfortunate after a very successful elective youth league conference where the president and first secretary of the party Cde ED Mnangagwa taught us the virtues of true cadreship.”

“The youth league does not condone such illegal behaviour and mischief. Accordingly, those behind such unbridled shenanigans must be warned to stop forthwith or face swift disciplinary action.”

“We implore all our members and leaders at every level of the youth league structures to respect the party constitution, embrace unity of purpose and shy away from petty needless contradictions.”

He said those involved will face disciplinary action. The raging fights are a confirmation of last week’s story by The NewsHawks which exposed a serious rift in the ruling party which exploded at the congress where thousands of party youths returned home amid bitterness following the imposition of leadership.

The fights have now manifested in several provinces but more glaringly in Mashonaland West province where a camp opposed to new chairperson Tapiwa Masenda pushed a vote of no confidence.

Masenda is accused of making unilateral co-options and nepotism. There are also fights in the Midlands province where senior party leaders are said to have taken keen interest in the composition of the youth league structures and also putting their hands in the women’s league conference to be held next month.

This week, women’s league chairperson Marble Chinomona confirmed a sinister agenda in the party, accusing some unnamed elements of trying to infiltrate the party.

“What we want is unity in the national executive of the women’s league. We want a women’s league that is not infiltrated by people who just come for positions. Some people are sent to destabilise the wing). We have already heard that money is being dished out somewhere, but people should know that when money starts to be circulated, it is buys dirty things,” she said in remarks that appeared to confirm fights in the party.

The conference is scheduled for June 23 to 26. Zanu PF is set for its main elective congress this year, with insiders saying Mnangagwa is likely to be challenged.

Related Topics:PoliticsZanu PF Youth
Up Next