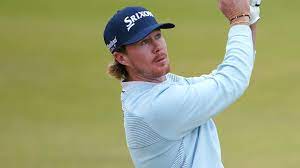 SEAN Crocker, the Zimbabwean 25-year-old professional golfer, was celebrating last Sunday after winning the “Hero” sponsored tournament at the Fairmont Club, St Andrews Bay, Scotland and in expectation of a US$320 000 cheque.

He recorded under intensity a score of 266, 22 under par, achieved in exceptionally demanding circumstances against a determined field relentlessly breathing down his neck.

Crocker barely hung on and his huge reward was claimed after getting home by a single shot for a first and memorable victory on the DP World Tour (European).

He had held on during high winds onto a single, or sometimes a two-shots lead all day, with commentators referring to his composed and positive performance in the face of intense and sustained pressure.

Crocker had set it all up on the first day with a course record equalling 63. After that he was in continual crisis as first one rival, then another, came at him. At one stage in the final round he was just two shots ahead of no fewer than eight other players threatening to catch or overtake him.

Typical of his round was two dropped shots on the 6th after a fluffed chip, but this setback was immediately rectified by polished birdies on the next two holes as the others scrambled in vain to take advantage.

Crocker is now ranked 38th on the European PGA Tour, which secures him invitations to other upcoming tournaments. This was a major breakthrough for the tall blond whose family took him from Harare to California at the age of five — and a productive career now beckons.

Sean is the son of former Zimbabwe cricketer Gary Crocker, who migrated to the United States with his family.

Although his son now plays golf under the American flag, he remains incredibly proud of his Zimbabwean roots, just like his old man.

That Zimbabwe continues to produce world-class golfers, or sports stars in general, is testament to the great potential that this country has at a global scale.

But a way has to be found to keep these shining stars at home. Zimbabwe cannot afford to have its best sport talent continuously being “poached” by the bigger nations, who already have an advantage due to higher populations and better national economies.

*John Kelley is a veteran author, journalist and keen golfer. He contributes regularly to The NewsHawks.

Related Topics:GolfSEAN CROKER
Up Next

Africa’s first black Test cricket umpire: ‘I was afraid of letting down a whole race’