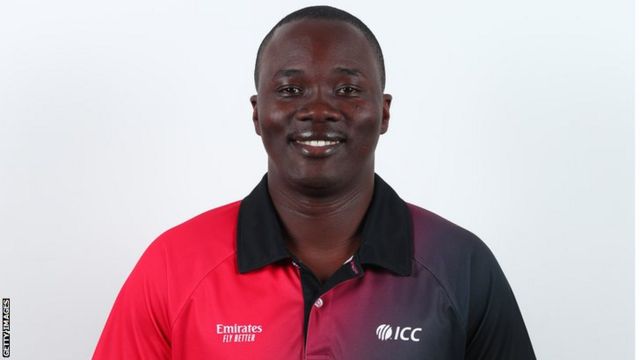 THE T20 World Cup began in Western Asia this week, minus Zimbabwe, who could not secure a place at the tournament due to a brief but costly ban by the International Cricket Council (ICC) two years ago.

But despite cricket’s plunge in Zimbabwe over the past 17 years, the country’s rich heritage in the sport remains visible on the world stage, at least for now, and the 2021 T20 World Cup is no exception.

Andy Flower, the former Zimbabwe ace, is the most prominent person at the tournament with roots in this country.

The legendary Zimbabwean wicketkeeper-batsman, who enjoyed immense success as England’s coach, is working for Afghanistan at the World Cup in the role of team consultant.

Umpire Langton Rusere (pictured) is the other purebred Zimbabwean at the tournament, which is being held in the United Arab Emirates and Oman. The 36-year-old umpire’s stock has been rising fast in recent years, and in April he made history by becoming the first black African to stand in a Test match.

Of the squad players in the 16-team tournament, the one with the strongest Zimbabwean link is England bowler Tom Curran.

The Cape Town-born son of the late former Zimbabwe star all-rounder Kevin Curran would have been joined by his English-born brother Sam, who was withdrawn from the squad after picking up an injury before the tournament.

The two brothers spent their early years in Zimbabwe when their locally-born father, who collapsed and died while jogging in Mutare in 2012, was the country’s head coach.

Then there are the coaches. Two of the pre-tournament favourites at the World Cup – England and West Indies – are under the tutelage of men who launched their coaching careers in Zimbabwe.

Windies coach Phil Simmons, who led the Caribbean side to T20 World Cup glory in 2016, had initially returned to Zimbabwe in 2003 as an upcoming coach to head the country’s fledgling national academy, following earlier memorable visits as a player in the ‘80s.

Simmons travelled to Bangladesh for the 2004 Under-19 World Cup as Zimbabwe’s technical adviser, before being promoted to the position of national team coach in 2005.

The big Trinidadian is today one of the best brains in the game – a much-sought-after coach in world cricket with success stories as coach of Ireland, Afghanistan, and his native West Indies.

Simmons’ lifelong affinity with Zimbabwe dates to the ‘80s when he toured the African country in its pre-Test era, setting the stage alight with his explosive batting for Young West Indies in a series of first-class matches. England boss Chris Silverwood also cut his teeth as a coach in Zimbabwe, as player-coach of local side Mashonaland Eagles between 2009 and 2012.

Silverwood, a former England fast bowler, is remembered affectionately in the country, and credited by many a player here for polishing the rougher edges of their game.

Somebody you cannot also leave out is the great ex-South Africa all-rounder Lance Klusener, who is now in charge of Bangladesh, and also looking to make a bold statement at the T20 World Cup. The man known in the cricketing world as Zulu was Zimbabwe’s batting coach during a brief period of revival under Heath Streak.

Not forgetting Ryan ten Doeschate of the Netherlands. The 41-year-old veteran Dutchman, one of the oldest players in the World Cup, was a regular overseas professional on Zimbabwe’s domestic circuit some few years back, and he is another one who will certainly mention this country as one of his favourite cricketing places.

A crippling poverty of leadership at Zifa