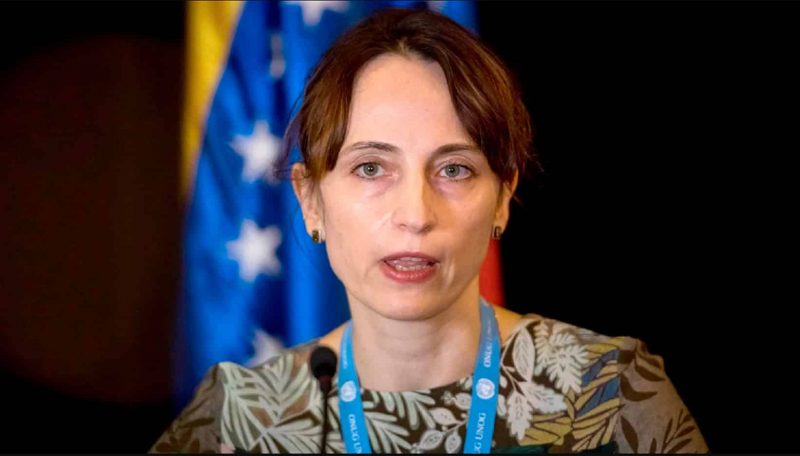 Douhan, who was invited by the government as part of a campaign to lift international sanctions on Zimbabwe, this week called on the United States and other Western powers to lift the restrictive measures on Harare.

The MDC Alliance has come out guns blazing, accusing the UN diplomat of lacking professionalism and parroting Zanu PF propaganda concerning sanctions imposed on Zimbabwe by the West post the land reform programme more than 20 years ago. The US and its Western allies say the sanctions are targeted at state-owned enterprises financing the ruling party, Zanu PF officials and security chiefs blacklisted for violating human rights and accused of electoral fraud in past elections.

Douhan this week called upon the West to lift sanctions on Zimbabwe, but the MDC-Alliance says she should have recommended a lasting solution to end Zimbabwe’s pariah status.

“If you are thinking that by joining (the Zanu PF anti-sanctions campaign), the noise, you are wasting your time,” he added.

Ncube said Douhan should have come up with a plausible roadmap to encourage the West to dialogue with the government of the day.

“An expert worth their salt should have thought of ways to bring those who imposed sanctions to dialogue with Zimbabwe,” he said.

Douhan courted the ire of the opposition and civic society when she joined Zanu PF in its call against the imposition of sanctions. This has drawn widespread criticism of her work in the country.

“If you want to help, you do not join the rhetorical propaganda. It is not sensible,” Ncube said, adding that the fundamental reasons for her fact-finding mission were misplaced.

“Using sanctions as a means for political advocacy does not do any good,” she said.

Zanu PF this week commemorated the anti-sanctions day, rallying its supporters and the African Union to denounce the restrictive measures.

Douhan’s report also played into the ruling party’s rhetoric that sanctions had contributed to the demise of the economy.

Ncube accused the special rapporteur of producing a pre-determined report.

He said Douhan’s press release was issued while party officials were meeting her delegation.

The MDC Alliance believes their concerns and contributions were not included in the final report.

“We are clearly the biggest opposition in Zimbabwe and outside Zanu PF the main political actor. In that context, our opinion is second to the government of the day. What happened suggested a lack of sincerity and genuine attempt to listen to all stakeholders,” Ncube said.

“The conclusions were already pre-determined and, that said, all credibility of the report is lost.”

Ncube accused Douhan of lacking professionalism and brazenly showing dislike for the opposition.

“When you meet a rapporteur, you expect that they will be diplomatic and respectful. It was clearly one of the most undiplomatic engagements we have ever done,” Ncube complained.

“It is disturbing that an international person shows open hostility to an organisation which is an important stakeholder. It speaks to the lack of objectivity of the process,” Ncube added.

According to UN Watch, a non-governmental organisation which monitors the multilateral organisation, Douhan’s one-sided itinerary was meant to silence certain key stakeholders and meant to portray the correct picture of the impact of sanctions.

In her statement, Douhan admitted that she did not meet all relevant stakeholders, adding that some non-governmental organisations did not contribute, fearing losing “international funding”.

She said those organisations which failed to submit their thoughts could still do so.

“Although the Special Rapporteur had the opportunity to meet many representatives of independent civil society organisations and human rights defenders, she notes with regret that a substantial number of NGOs and some other interlocutors failed to engage with the mandate due to various hateful and intimidating messages that appeared in social media and news outlets, and an alleged fear of losing foreign donations,” she said.

In February 2021, she was accused of undertaking a major propaganda visit to Venezuela, portraying the Maduro regime as a victim of US sanctions.

UN Watch says Douhan’s visit is part of a campaign by President Emmerson Mnangagwa’s government to lift sanctions. Her submissions have been adulated by his regime.

“The so-called special rapporteur who comes from Belarus, one of the world’s biggest human rights violators, which is also facing sanctions, is hardly an honest broker. Her itinerary, which is brazenly one-sided, is a clear indicator that the script has already been written in advance,” Magaisa said.