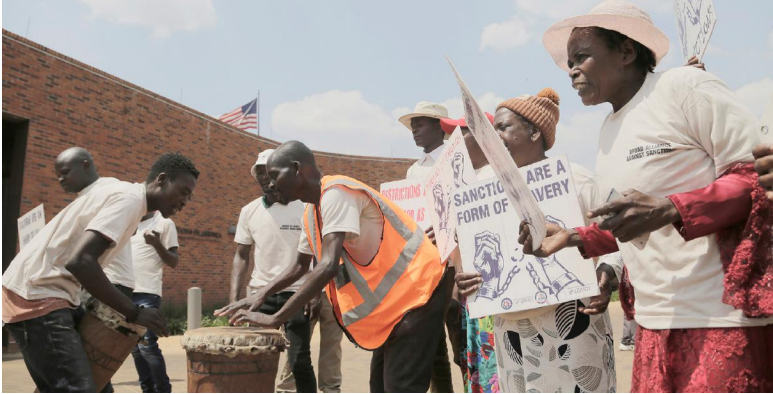 A BATTLE of narratives between the Zimbabwean government and the Western part of the world, particularly the United States, has erupted over the cause of Harare’s economic misfortune ahead of the Sadc Zimbabwe Anti-Sanctions Day commemoration to be held last Tuesday.

The Zanu PF government blames the economic woes on Western sanctions and has not taken responsibility for the role of bad governance, policy failure and corruption.

The United States government has maintained that the sanctions imposed on Zimbabwe are not the reason for the country’s economic misfortunes as they are only targeted at individuals benefitting from human rights abuses and corruption.

The Zimbabwean economy started declining sharply from 1997 because of a number of reasons, among them the huge cost of joining the war in the Democratic Republic of Congo and a huge unbudgeted financial outlay on compensating veterans of Zimbabwe’s liberation struggle.

The dramatic ramifications of the land reform programme in 2000 also shook the economy and this was well before the imposition of sanctions. By that time, Zimbabwe had already ceased receiving support from international financial institutions, particularly the International Monetary Fund and World Bank because of its failure to clear arrears.

The United States Congress in 2001 passed (and amended in 2018) the Zimbabwe Democ[1]racy and Economic Recovery Act (ZDERA). The law restricts US support for multilateral financing to Zimbabwe until Harare implements specified political and economic reforms.

In addition, the US Treasury has since 2003 imposed targeted financial sanctions against individuals and entities in connection accused of promoting corruption, human rights violations and other anti-democratic practices. The US also imposed visa restrictions on certain individuals, banned transfers of defence items and services destined for or originating in Zimbabwe. Addressing the media in a digital Press briefing, US State Department sanctions coordinator ambassador James O’Brien said US sanctions were not responsible for the country’s economic woes.

Apart from poor policies, he said Zimbabwe’s economy is weighed down by corruption and economic mismanagement.

“Essentially, we are focused on the people who are responsible for and profit from human rights abuses, corruption, and anti-democratic actions. And that’s the limit of what we’re looking to do,” said O’Brien.

“And I just want to emphasise that it’s very important that we call out those who are responsible for and who profit from abuses and corruption. And you can just see this from the general reporting about the situation in Zimbabwe. The country continues to have massive arrears to the international financial institutions. The economy is deteriorating. That may be partly just poor policy choices, but it’s also a result of corruption and economic mismanagement.

“And here it’s not simply the US government using our own resources to say that. If you take a look at Transparency International and some really brave and intrepid investigative journalists and reporters in Africa — such as Maverick Citizen — they talk about billions of dollars in illegitimate, illegal cross-border transactions a year. And those cost the citizens of Zimbabwe a lot of their chance at having a more prosperous and free life.

And so we’d like our sanctions to be part of a policy answer that begins to improve the management of public services and public resources, and makes things possible for the people of Zimbabwe to improve,” he added.

The address came a few days after a handful of protestors under the banner of Broad Alliance Against Sanctions picketed outside the US embassy in Harare, demanding that sanctions be lifted. The protestors have camped outside the embassy for the third consecutive year.

For years, Zanu PF has been blaming sanctions for the deterioration of social services and economy, but O’Brien insists that the intention of the sanctions is not to isolate Zimbabwe.

“And just a note on the scope, we are not engaged in a comprehensive effort to close the Zimbabwean economy. We don’t sanction banks. We aren’t stopping certain kinds of transactions. We’re aware that because of the depth of the problems and the duration of this programme, there probably are a lot of companies who believe that doing business in Zimbabwe is just too difficult. And that does cost opportunities for the people of Zimbabwe. Whether that’s the result of the underlying mismanagement and corruption, or whether our sanctions add to it, that’s something we’re willing to talk with companies about, because we do want legitimate businesses to be able to do legitimate business in places. And that’s true anywhere around the world, including in Zimbabwe,” he said.

On 25 October 2022, the Southern African Development Committee (Sadc) will stand in solidarity with Zimbabwe in calling for the end of sanctions. In defending the US sanctions stance, Jim Mullinax, the director of the Office of Sanctions Policy and Implementation at the State Department, said the endgame is behavioural change.

“We use these sanctions programmes to disrupt corrupt individuals, to disrupt the activities of human rights abusers, terrorists, and other bad actors’ ability to undermine democracy, to stoke instability, and to provoke violence,” he said.

“The ultimate goal of our sanctions, I have to say, is not to punish these individuals but to bring about a positive change in behaviour, and of course to support our policy objectives within the broader framework of US government strategy.

“With respect to our Zimbabwe sanctions programme, we are targeting individuals and entities who have been actively involved in actions that violate human rights of individuals, who have facilitated corruption, and who undermine democracy. And our sanctions impose a cost on their behaviour. By restricting their use of the US financial system, we cut off the access to resources that they may use to further their bad actions. We also use sanctions to prevent them from using the United States as a safe haven for any ill-gotten gains that they may receive from their corrupt activities,” said Mullinax.

Zimbabwean government officials and individuals liked to corruption such as tycoon Kudakwashe Tagwirei and his company Sakunda Energy have been under sanctions.

Recently, Zimbabwe Republic Police Deputy Commissioner-General Stephen Mutamba was added to the list for stifling freedom of association after banning rallies and overseeing violence against members of the political opposition.

The sanctions, he added, encourage these individuals to cease their malign activity. The picketing and the marches outside the embassy will not be effective in solving Zimbabwe’s problems, US officials say.

“What we’re asking is that the Zimbabwean government take meaningful, noticeable, material actions that strengthen the democratic processes, build the institutions, and respect its constitution. We’d also like to see condemnation and prosecution of corrupt – for corruption and human rights abuses. Those are the things that will lead to people coming off the sanctions list, but they’re also the actions that make it much easier for a broader engagement,” said O’Brien.

The courts have often come under heavy criticism for catching and releasing corrupt officials. At the peak of Covid-19 the then Health minister, Obediah Moyo, was accused of abuse of public funds but has since been acquitted. Recently, Gokwe-Nembudziya legislator and a close ally of President Emmerson Mnangagwa, was arrested for the alleged misuse of funds of the Cotton Company of Zimbabwe to start his trucking business.

He has since been released on bail and is applying for discharge from the charges that were levelled against him. Obrien noted an incident in which suspected Zimbabwean state agents subjected two US Senate officials to a high-speed car chase in Harare.

He said it showed the insincerity of the Zimbabwean government in embracing genuine reforms.

“And I just want to call attention to one particular incident that matters to us here in Washington. There was an incident involving some staff from our US Senate. These are public servants who are deeply committed to a stronger US relationship to Africa, and so the idea that a group of thugs in some cars would try to intimidate visiting US officials resonates incredibly poorly across Washington. Those are the acts of a government that doesn’t want to be engaged. They’re not the acts of a government that’s looking to improve its relationship with the United States, but also with the wider international community. So things like that need to stop, but mostly we want to see changes in the behaviour related to human rights abuses, antidemocratic behaviour, and corruption,” he said.