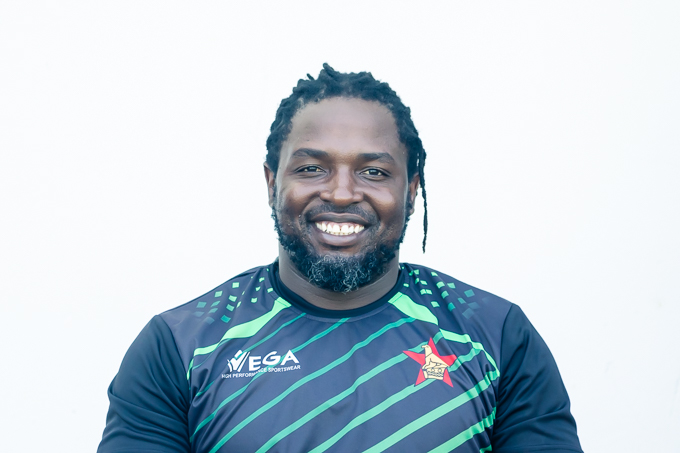 DOUGLAS Hondo’s elevation to the position of Zimbabwe cricket coach on the tour of Pakistan, in the absence of incumbent gaffer Lalchand Rajput, is another feather in the cap of perhaps the most underrated sporting family in the country.

In Zimbabwean cricket’s modern era, the period after the African country was granted Test status in 1992, five former national team players have gone on to become the country’s head coach.

Although only on an interim basis, 41-year-old Hondo now has the distinction of being the first black ex-Zimbabwe national team player to lead the country as coach in international cricket.

Hondo (pictured) is substantively Zimbabwe’s bowling coach, his full-time job with the team under head coach Rajput, the former India player who was prohibited by his native country from travelling for the limited-overs series in Pakistan amid heightened India-Pakistan political tension.

Zimbabwe’s cricket board swiftly appointed Hondo as the stand-in coach for the three ODIs and three Twenty20 internationals against the Asian side.

The standout family milestone is that the former fast bowler’s young brother, 38-year-old Daniel Hondo, is currently the backline coach for Zimbabwe’s national rugby team, a team he captained with admirable leadership for four years.

It is a unique family feat—two brothers concurrently serving as assistant coaches of two of a country’s foremost national teams—in the two separate sporting disciplines they were internationally capped.

Yet, to quite a number of sports enthusiasts in Zimbabwe, the Hondo siblings’ connection with their respective two codes should have been the other way round.

One of those to hold that view is Tatenda Taibu, the former Zimbabwe cricket captain who attended Harare’s Churchill Boys High School at the same time as the two gifted brothers.

“It was a surprise that they both chose the lesser of their talents. They have done well in their careers however. I feel that they both would have achieved more.”

It is kind of hard to disagree with Taibu on this one. Back in the day, Taibu teamed up in a Zimbabwe Under-16 cricket side with Daniel— the former Sables skipper—and those who know the man well will testify how much of a herculean task it is to impress the ex-wicketkeeper.

“He was a top out-swinger, and upright seamer,” says Taibu of the former Zimbabwe rugby captain. “To be honest, I was a great fan of his bowling. I reckon my best school catch was off his bowling.”

Others will find Taibu’s assertions debatable, though. This includes no less a person that Donald Hondo, the oldest of the brothers who did not however pursue sport at the highest level himself.

“Doug was a brilliant flyhalf, he had brilliant skills and kicks,” says Donald, a gifted cricketer in his schooldays. “The one year, they (Churchill) lost just once, to Peterhouse, but kicked every other powerhouse in rugby, and Doug was a key player. On Daniel, I never saw him play cricket that much, but I would argue that Doug was a better cricketer, as he started playing Zim Schools from Under-15, if not sooner, to Under-19, then into Zim.”

Douglas Hondo played nine Tests and 56 ODIs for Zimbabwe in an international career that never really blossomed as hype had suggested. To be fair to him, constant injuries and inconsistent selection had a negative effect to an extent.

An ODI match-winning bowling performance of 4-37 against India in Kochi in 2002, two of his scalps being the legendary pair of Sourav Ganguly and VVS Laxman, will however be forever etched in Douglas’ memory.

As a player, Daniel Hondo had a more successful career in his sport, with a winning ratio of about 90% as Zimbabwe rugby captain.

In 2014, Daniel was moments away from captaining the Sables to their first Rugby World Cup since 1991, although he would shoulder some of the blame for a costly decision that denied Zimbabwe a crucial bonus point in their 28-10 win over Kenya, thus falling marginally short of qualification.

On the whole, Daniel was a classy rugby player, a firm favourite with many. He is remembered as a robust centre able to step around defenders at pace, gifted with good handling and running skills as well as solid defence.

In terms of silverware, Daniel helped Hartpury College to the British national university rugby title in 2007 and was a key player in the Zimbabwe team that won the bowls section of the Rugby World Cup Sevens in Dubai in 2009.

Also a top-class sevens player, Daniel was a talismanic figure for Zimbabwe for the better part of a decade, captaining the side on quite a few occasions and later coaching it briefly.

As a coach in the main format of the game, Daniel’s skills are highly regarded. In 2018, when he was hastily appointed mid-season as assistant coach of a struggling Zimbabwe team under former Springbok mentor Peter de Villiers, he was credited with sharpening the Sables’ backline, helping the team avoid relegation from African rugby’s top-flight division.

Daniel is perhaps the most talented of the Hondos, but sport is clearly in the family genes.

Their late father, Kotsanayi Davison Hondo, a top police officer who served in the force for 29 years, played football to decent levels, in addition to being a keen referee. In the 1970s, he was one of the star players in a Rhodesian police select team that toured Malawi for a series of matches.

“Whilst being a footballer with the police, he also refereed first division (the country’s second-tier competition) matches, so his weekends were busy,” recalls oldest son Donald.

“He loved football so much. Often, when we were young, he would take us to Rufaro Stadium to watch Zimbabwe national team matches.”

The late Hondo was initially stationed in Bulawayo, at Rose Camp Police Station, so his first two sons—Donald and Douglas—were born the in the country’s second largest city.

No slouch at sport herself, Mrs Hondo—the lady of the house—played netball for the Rose Camp Police Club, a formidable outfit in that sport those days.

But it is the family’s sons who went on to make a mark in sport.

Moving to Harare in 1982—where the Hondo children had a comfortable middle-class upbringing in Cranborne suburb—Donald and little Douglas showed early signs of sporting prowess.

At Queensdale Primary School, just a kilometre or so away from home, was where the boys first came into contact with cricket.

The late Peter Sharples, a stalwart of junior cricket in Zimbabwe, introduced the game to hundreds of enthusiastic and keen pupils at the school.

Donald, who played first-team cricket at Churchill at the age of 15—the highest level he reached before quitting sport—speaks glowingly of Sharples, later to become a revered sports master at Churchill until his death in 1998.

“Peter Sharples loved kids,” comments Donald. “You know Nasho Kamungeremu, the famous golfer? Nasho’s dad worked for Sharples, and Sharples kind of adopted him. Nasho went to Queensdale with us. It may be that this is how Sharples got connected to the school. Funny, Nasho joined cricket at some point. We were so scared of his batting as he used to swing the ball so hard with the golf swing and the ball would just bolt off his bat with such a hard hit and force. It was scary to have him bat!”

Like Sharples, Kamungeremu is also now late, having passed on in 2007 at the age of 34. Back in 1988, Kamungeremu became the first black golfer to win the Zimbabwe Junior Strokeplay, and later on headed the country’s professional golfers’ association.

Sharples, his childhood benefactor, was however more passionate about cricket, his first love in sport.

“I remember him coming to Queensdale, and explaining the game called cricket in the school hall,” Donald reminisces.

“He would show us pads, wicket-keeping gloves, we were fascinated by the equipment. Those that showed interest in cricket were called for practice and we were taught from scratch how to bowl, how to hold a bat and how to record scores. Soon all boys were obsessed with cricket. That’s when you would see us bowling stones going to the shops or coming from school. Peter would take the first-team to Harare Sports Club to watch Zimbabwe play, and would make lunch for all of us. That’s how we all became passionate about the game. Sometimes we would go to this house in Queensdale and spend time reading some cricket history books, then play cricket in his backyard.”

The appetite for cricket did not end at school for the Hondo boys, who continued to throw countless balls at each other at home for hours on end.

“One white neighbour of ours would watch us play with a makeshift bat in our backyard, and one day she surprised us with a gift from South Africa – a cricket bat – the first Hondo family bat,” says Donald.

“You can imagine how ecstatic we were! Ma window taipwanya veduwe (we used to break windows)!”

The oldest of the Hondo siblings works in the tourism industry, away from sport, though still an ardent follower.  The other highlight of his young days was being part of Churchill’s popular Pipe Band, an outfit held in admiration at the Harare all-boys school.

One of Donald’s fondest memories in cricket was being coached by Zimbabwe legend Andy Flower as an Under-13 team player at Old Georgians Sports Club, and playing against a Milton Boys High side that included Mpumelelo “Pommie” Mbangwa, now a world-renowned commentator.

For good measure, there is a fourth sportsman in the Hondo clan! He is 25-year-old Dylan Hondo, the youngest of the family, a cricketer who has played seven first-class matches and still vying for an international call-up.

Quite remarkably, all four brothers have continued the family tradition of attending both Queensdale Primary School and Churchill. Their sister, Delmer, also went to Queensdale. She carried on to Churchill’s sister school, Roosevelt Girls High.

The proud family – which includes their ex-netball star mother – will be keenly following proceedings thousands of miles away in a few days’ time.

Douglas, son and brother, knows he can count on them to be in his corner when he faces his first real test as a cricket coach on the Pakistan tour.

The two teams open with the first ODI in Rawalpindi on Friday.

Chibhabha vows Zimbabwe are in Pakistan to win