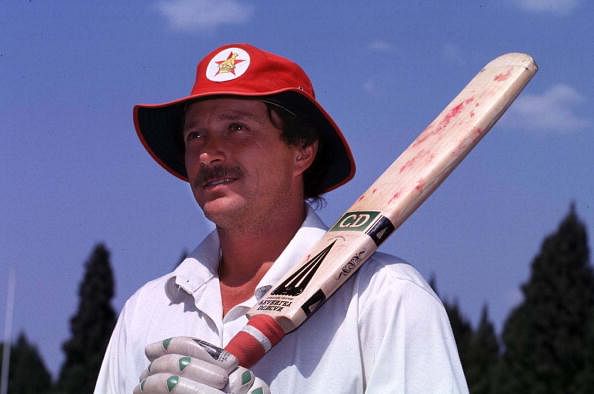 AS he celebrates his 20th anniversary in the spotlight, the world’s only recognised blind cricket commentator, Dean du Plessis, has gone deeper into the archives in tribute of a man he considers to be Zimbabwe’s greatest cricketer of all time.

Harare-born du Plessis, who revealed a “worrying” hearing loss to a leading international news conglomerate last week, spoke briefly in that interview of his great admiration for the former Zimbabwe captain and batting kingpin, who he has known closely since his days at a South African school for the blind in the 90s.

The 44-year-old broadcaster and blogger has gone a step further in reliving the moments that Houghton created lasting impressions, and made him one of this country’s finest sportspersons in history.  Du Plessis says he shared his respect for Houghton with his late father Chris, who passed on in 2020 and had been an influential figure in his cricket journalism career.

“He loved his cricket so much, he taught me a lot about the game,” du Plessis tells The NewsHawks this week. “He used to reminisce about his favourite cricketers: Graham Pollock, Mike Procter, Barry Richards, Eddie Barlow – all the cricketers he used to admire when he was a young man.

Most young sports fans fall in awe of their heroes – veneration that lasts well into adulthood – initially because of one particular match, or series in this instance. For a young Dean du Plessis, it was when he completed his schooling and returned home to Zimbabwe permanently.

The year was 1994, when glorious Houghton lasted a good two days in a Test in his birthplace Bulawayo to build the innings that earned him stripes as a world-class batsman, a score of 266 that remains the highest ever by a Zimbabwean.

But that majestic innings wasn’t the only Houghton brilliance that stood out in that series of three Tests and three ODIs. “That was a good series for Zimbabwe from a perspective that we discovered Heath Streak, that’s when we realised that this is a guy who could bowl, and Dave Houghton had a phenomenal series,” du Plessis says.

Three years earlier, Houghton had made a massive impression on du Plessis with his fearless batting during a benefit game in 1993 for former South Africa captain Kepler Wessels in Port Elizabeth.  The adoring young fan from Zimbabwe keenly followed the action from his boarding school in Worcester, near Cape Town.

“Kepler selected a very strong side to come and play against a fullstrength South Africa team, and, you know, South Africa were at their strongest,” recalls du Plessis.

“And what Kepler did was he also chose Andy Flower and Dave Houghton. I remember there was a beautiful, beautiful article written by a South African journalist about how nice it is to see two Zimbabweans included in this World XI. Unfortunately, they focused way more on Andy Flower than they did on Davie. It was so nice that Andy didn’t do a thing, well, that wasn’t nice (…chuckles).

But Dave, he went out there against this South African bowling attack: Allan Donald, Brett Schultz, Craig Matthews, and the off-spinner Pat Symcox. There was one more seamer who I’m missing out…Fanie de Villiers, yes. Houghton made 114 off 99 balls with 12 fours and five sixes which in those days was completely unheard off and especially against that bowling attack.

To be sweeping Fanie de Villiers, who was quick enough, let me tell you, and to be playing sweep shots like he was playing the spinners! You know, Fanie would bowl outside the off-stump and Davie would play a genuine sweep shot as if he was hitting the off-spinner.

He was hitting him into the tennis courts at St George’s Park, which was a very, very big hit. And obviously, he made mincemeat of the off-spinner, Pat Symcox. Everybody knew Davie was capable of doing that because he was a very good player of spin, but they didn’t expect him to really take on Fanie de Villiers and Craig Matthews in the way that he did.”

Bulawayo-born Houghton played 22 Tests and 66 ODIs for Zimbabwe between 1983 and 1997. The 64-year-old former star, who went on to become Zimbabwe’s coach before working abroad, has recently returned home from the UK to take up a new post as the country’s national coaching manager.

Dealing with a sensitive subject for a better world

For Peter, this is probably just a ridiculous sideshow