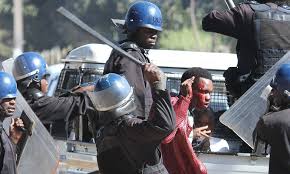 IF anyone ever doubted that Zimbabwe is a criminal state, the latest manifestation of the weaponisation of the law has provided irrefutable evidence of the extent to which the regime is prepared to kill and maim for the sake of power retention.

On Thursday this week, Godfrey Karembera (43), a prominent opposition Citizens’ Coalition for Change activist popularly known as Madzibaba VeShanduko, was accosted by the police, assaulted and brutally tortured. He was donning the bright yellow colours of the CCC, Zimbabwe’s newest opposition party which has taken the political landscape by storm.

When pictures and videos of a badly hurt Madzibaba began filtering through social media, the public was outraged.

Feeling the heat, the police then issued a bizarre statement on their vicious attack on an unarmed citizen.

Police are now claiming that Madzibaba attempted to deface the Mbuya Nehanda statue in central Harare. Nobody will believe that. Even if it were true, does it justify the brutal assault and torture?

While the Zimbabwe Republic Police say they are investigating the matter, their objectivity is questionable as they are already accusing Madzibaba of using “abusive language” against officers. They have pre-judged the so-called investigation — which is nothing but a shabby ruse to evade responsibility and gaslight the gullible.

The police posturing is yet another stark reminder that Zimbabwe is still not compliant with section 210 of the constitution which provides for an Independent Complaints Mechanism meant to enable the public to file official complaints against members of the security services.

It has become increasingly clear that the politicised and partisan police in this country are a law unto themselves.

They defy court orders, ride roughshod over constitutional rights and are the cat’s paw of a discredited authoritarian regime. This sounds like a description of racist Rhodesia — a tragic reality of a country which has been independent but not free for 42 long years.

When a government unleashess its instruments of coercion on rural areas all in a desperate bid to  block the opposition from convening a High Court-sanctioned campaign rally, it loses its last veneer of credibility.

Zanu PF thugs armed with knives, machetes and spears are let loose on a CCC rally to murder the innocent. Not a word from the government; after all, no less a figure than Vice-President Constantino Chiwenga himself recently likened the opposition to “lice” that must be mercilessly crushed.

Where are the killers of Mboneni Ncube? When will they be brought to justice?

Far too many lives have been lost and the time has arrived to draw a line in the sand and boldly declare: This far, but no further.

The state agents who abducted the student Tawanda Muchehiwa in Bulawayo and brutally tortured him for days have still not been brought to justice.

There is a glut of evidence. The NewsHawks and the online tabloid ZimLive conducted investigations into the matter and unearthed unassailable evidence of state criminality. The state left its fingerprints at the crime scene — which explains why the so-called official probe hit a brick wall before it even took off.

There is a tragic sense of impunity in all this.

The Zanu PF government is playing a dangerous game. When you sow the wind today, do not be surprised tomorrow when you reap the whirlwind.