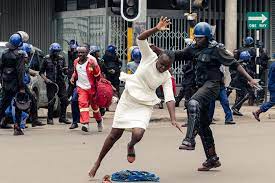 VIDEO footage obtained by The NewsHawks and quickly shared on social media showing Zimbabwean police savagely assaulting civic and opposition activists arrested for allegedly disrupting traffic in Harare while on a rally mobilisation drive brought back images and memories of police brutality reminiscent of the Robert Mugabe and Ian Smith eras.

The violence and brutality happened at a time President Emmerson Mnangagwa was attending the sixth European Union-African Union summit in Brussels. The meeting was co-chaired by the President of the European Council Charles Michel and the President of Senegal Macky Sall, also AU chairman.

While Mnangagwa was away, the main opposition co-deputy leader Tendai Biti was seized by police at Letombo Spar in Harare, while on a by-elections campaign trail. The by-elections are due on 26 March. Days later, yesterday, police arrested CCC activists and subjected them to inhumane attacks.

Zimbabwe has a long history of police violence and brutality dating back to colonial times. The coming of independence in 1980 did not change anything much. If anything, it worsened the situation in some respects.

The police have for years been brutalising fellow citizens, while the government played dumb and turned a blind to that. Citizens have been beaten up, tortured and died in police cells. In as much as we have been talking of “black lives matter” in recent months, the Zimbabwe government should also realise that Zimbabweans’ lives matter too, even if they are all mainly black.

Zanu PF and its government was vocal during the “black lives matter” protests in the aftermath of the George Floyd murder by police in the United States, but their own record is equally horrific. That’s why people charged Zanu PF with hypocrisy at the time and told them to first end police brutality at home before rushing to talk about other countries.

The post-colonial state under the late former president Mugabe and now his successor Emmerson Mnangagwa inherited and largely maintained the colonial coercive state security apparatus, including some repressive laws which were kept for years before being repackaged and unleashed on citizens.

Police are doing all they can to throw spanners in the works for the CCC. Even the clearance letter for the rally which police issued had obstructive conditions, which never apply to the ruling Zanu PF.

This leads to another problem: selective application of the law.

Tied with brutality, selective application of law and impunity, that makes Zimbabwe an authoritarian state which does not respect its own constitution, laws, rights of citizens, due process and the rule of law.

Studies show that abuse of police power and functions impacts negatively on the law enforcement agents’ image. This also affects police-community relations, including withdrawal of public support, loss of respect, and fear of the police.

Brutal and indiscriminate use of excessive force by police leads to injuries, loss of lives and trauma on innocent citizens. Civil suits, which also emanate from the abuse of police powers and functions, are costly to the taxpayer and damage the image of the organisation.

Public funds must not be used to pay for damages incurred by rogue police officers who behave like colonial Rhodesian law enforcement agents.

Though the police service charter and the institutional framework command put some measures to curb incidences of abuse of power, the strictures seem to be inadequate.

For police to address these repressive and damaging excesses, it needs to ensure further training, professionalism, legal reforms, independent monitoring and deal decisively with abuse of power and duty by its officers.

A critical evaluation of the impact of police abuse of power, together with military  killings on 2 August 2018, shows that their actions were partly responsible for shipwrecking Mnangagwa’s coup project – its legitimacy, mantras like “Zimbabwe is Open for Business” and claims of a new dispensation, which is not different from that of Mugabe and has parallels with Ian Smith’s rule in terms of brutality.

While at it, police should also clampdown on rampant corruption within its ranks.

Plight of the Zimbabwean teacher