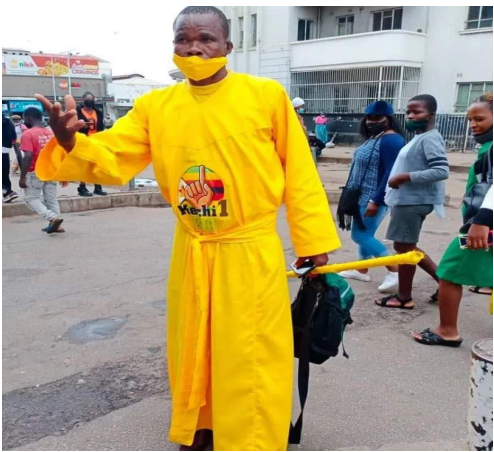 OFTENTIMES in our political, electoral and social spheres much attention and visibility are focused on elite public figures and political leaders who are customarily at the top of the state and civic food chain.

At this point it is important to invoke Mari Matsuda’s thesis of “looking to the bottom” in order to bring to national consciousness the fundamental civic duty and organic agency of one of the frontline warriors of democracy whose selfless and tireless efforts have often been overlooked, downplayed and largely ignored.

This effort attempts to bring into focus the crucial civic, political and democratic role being performed by Madzibaba Veshanduko, a local activist, in the less glamorous dungeons of political and civic activism.

The launch of the Citizens’ Coalition for Change (CCC), formerly MDC-Alliance, led by Nelson Chamisa, was overwhelmingly received and greeted with much pomp and fanfare.  It was a big deal.

The contagious and infectious resonance of this new political kid on the block – set to emerge as the biggest opposition party in the March by-elections or the 2023 general elections given its wide social base, was accompanied with euphoria as demonstrated by the trending on the social media platform Twitter of the hashtag #YellowFriday whereby every progressive freedom and democracy-loving Zimbabwean uploaded and posted their yellow outfit in solidarity with the birth of the CCC.

The CCC’s expected rise will effectively bury the MDC political brand which became the rallying point against Zanu PF over the past two decades, especially at the height of its power.

The MDC brand is likely to die in the by-elections or general elections, with MDC-T leader Douglas Mwonzora, Chamisa’s political arch-rival, as its under[1]taker.

However, amid the intoxicating and infectious “yellow fever” euphoria around the CCC, Madzibaba VeShanduko was already getting his hands dirty, battle ready and hitting the ground running, propagating and publicising the newly-born baby across the political landscape.

The MDC-Alliance, led by Chamisa before its metamorphosis to CCC, had been brutally criticised as only actively involved in idle social media activism, but conspicuously and crucially missing on the political theatre, especially in the Zanu PF rural heartlands.

Its leaders were also criticised for being full of talk, but no action and visibility – all froth but no beer.

All sorts of theories were peddled about why Chamisa was not acting, with some saying he was compromised behind the scenes by President Emmerson Mnangagwa’s regime or its enablers.

But Madzibaba is not and could be literally and practically viewed as saying “ask not what the CCC can do for you, but what you can do for them”.

Accordingly, in these early moments of the political teething of the CCC, Madzibaba could be seen as already evangelising and trying to win hearts and minds for the CCC.

Through his unmistakable customary and traditional ankle-length brightly coloured apostle gown, which this time is yellow instead of being red, Madzibaba’s visibility and presence was felt in Harare’s city centre.

Like a biblical prophet, Madzibaba, armed with his sceptre, could be seen traversing the length and breadth of the central business district, spreading the news and publicising the newborn political baby to local residents and citizens at large.

Politics is praxis and, accordingly, Madzibaba, like a prophet possessed with yellow fever and anointed with the gospel of citizen change, took his crusade into the belly of the beast. That is into the Zanu PF rural strongholds.

Thus he did not just confine his evangelical crusade to the safe and comfort zones of opposition-friendly enclaves like Ha[1]rare city centre. Therefore, it was refreshing and empowering to witness Madzibaba aboard a don[1]key-drawn cart in the company of village elders.

In that scotch-cart, Madzibaba was breaking the bread, informing, educating and conscientising the village elders about this new political kid on the block. This was a pragmatic and commonsensical approach to publicising the CCC in the rural areas.

Considering that most ruraltarians do not have access to social media and the national broadcaster ZBC is institution[1]ally biased against the opposition, it was mostly through word of mouth that the village elders could be kept abreast about the birth of CCC.

The multi-pronged organic political conscientisation of Madzibaba can be further demonstrated by the manner in which he spread his political evangelical tentacles into voter registration and voter mobilisation exercise.

In another particular video clip, he is witnessed thanking the newly registered young voters and exhorting them to be fishers of other new young voters. This is particularly significant, considering the fact that there has been voter registration apathy from the younger generation.

It is this largely under-appreciated hands[1]on approach work of the likes of Madzibaba which has a significant bearing in driving home the gospel of voter registration.

The organic citizen responsibility, activism and agency of Madzibaba is also further captured in video footage of a bro[1]ken village borehole.

Madzibaba was highlighting concern about the lack of clean potable water for the villagers due to the bro[1]ken down borehole.

Nonetheless, he was assuring the community that he had purchased some of the spare parts to fix the borehole.  Moreover, his overall wish was to modernise the borehole and have a solar-powered system with water storage tanks and taps.

This kind of grounded hands-on approach towards community problems is an important ingredient in cultivating servant leadership.

There is no doubt that in future if Madzibaba wants to run for councillor, he has so far demonstrated that he had the organic discipline, the gravitas and sound qualities to be a grounded servant leader.

The Zimbabwean political ecosystem, just like its social and cultural polities, has been heavily influenced by the hyper-glamourised celebrity culture.

This celebrity culture has expressed itself through the socialite phenomenon of mbingaism (monied and usually flamboyant social high-fliers).

Consequently, national virtues of civic responsibilities and civic agency have largely been under-appreciated, downplayed and largely ignored. Hence, the selfless commitment of Madzibaba VeShanduko deserves to be highlighted, recognised and appreciated.

Madzibaba is the visible representation of many invisibilised and under-appreciated foot soldiers of the democratic struggle.

*About the writer: Taona Blessing Denhere is a human rights and international development lawyer based in the United Kingdom.

The rule of law is imperative