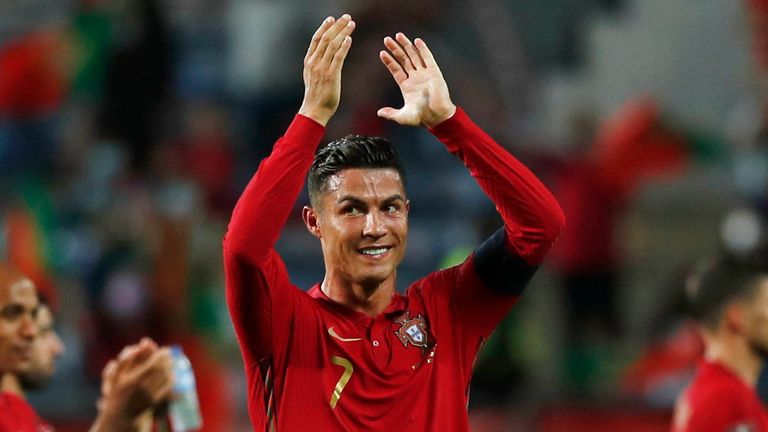 OUR new signing Cristiano Ronaldo is often labelled as one of the greatest footballers of all time.

But just how good has he been during a professional career which began in 2002 and continues to flourish almost two decades later?

Here is a long list of some of the Portuguese forward’s most impressive records, some of which may never be beaten.

Ronaldo has struck 134 times in Europe’s top-tier competition and he is 14 goals clear of eternal rival Lionel Messi in the all-time list.

Cristiano and the Champions League are clearly a match made in heaven: he has more final wins (five) than any other player, has scored a whopping 67 goals in the knockout stages (more than anyone’s total competition tally, bar Messi, Robert Lewandowski, Karim Benzema and Raul) and also holds the single-season scoring record (17 in 2013/14).

The Portuguese icon isn’t selfish, though: no-one can beat his total of 42 assists, either. He is also just one game away from equalling former team-mate Iker Casillas’s mark of 177 games in the competition.

Cristiano, by far and away Portugal’s most capped player, now has 111 senior international goals, more than any other male footballer in history.

The Portuguese does hold the record for international hat-tricks (nine), including one for Portugal against Spain at the 2018 FIFA World Cup, which made him the competition’s oldest treble scorer.

Add in Cristiano’s World Cup, Confederations Cup and Nations League appearances, and he’s the only player to make the scoresheet in 12 consecutive international tournaments.

He’s scored more competitive goals than anyone else in football history! Ronaldo’s winner for Juventus in the Supercoppa Italiana final in January was the 760th strike of his incredible career (now 785 and counting), surpassing Czech forward Josef Bican, who netted a ridiculous 759 goals in 495 appearances between 1931 and 1955.

The majority of those goals came for Real Madrid and he is Los Blancos’ all-time top scorer, with 451 goals – 128 clear of previous record holder Raul.

Any footballer would be delighted to score 50 goals in a season: no-one has ever managed it for United, for example, with Denis Law’s 46 in 1963/64 our club record. At Real Madrid, Cristiano breached the half-century barrier for seven consecutive seasons between 2011 and 2017, which is a feat unmatched in football history.

Ronaldo is the only player to score 50 or more goals in the Premier League, La Liga and Serie A: historically seen as Europe’s three best leagues. He’s also lifted the title in each country, another unique achievement.

He has been included in the UEFA Team of the Year on a whopping 15 occasions. After securing a spot in the side as a callow 19-year-old in 2004, Ronaldo missed out for two consecutive seasons before once again being involved in 2007. He hasn’t been left out of the all-star XI since.

Cristiano’s 2016 Ballon d’Or win – at the end of a year in which he helped Real Madrid to the Champions League and Portugal to the Euro 2016 title – saw him finish an unparalleled 429 points clear of second-placed Messi in the voting.

In 2006/07, Ronaldo won the Football Writers’, PFA, Young and Premier League Player of the Year awards. He is the only footballer to do that in England.

Cristiano is listed in Guinness World Record Book of 2021 as being the most liked person on Facebook, with 124,726,150 likes.

He is also the most followed person on Instagram. At the time of writing, a whopping 336 million people have him on their feed. That’s more than the entire population of the United States of America!

Finally, the 36-year-old is the most popular sportsperson on Twitter, with 93.9 million followers. Only former US President Barack Obama, plus pop stars Justin Bieber, Katy Perry and Rihanna, can top that.

All statistics correct as of 2 September 2021.

A bloody afternoon at Prince Edward 16 years ago