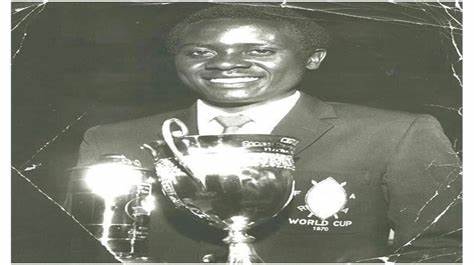 GEORGE Shaya obviously knew about Eusébio, but most likely not the authoritative Hungarian-Australian football journalist-cum-broadcaster who once likened him to the late Portuguese superstar hailed as one of the greatest of all time.

László Ürge was born in Hungary in 1945, growing up in an era when the central European country had the best national football team in the world, driven chiefly by a mean goal-scoring machine called Ferenc Puskás.

Young László was aged nine when the great Hungary side came close to seal its place in history, suffering a shock defeat to West Germany in the 1954 World Cup final.

It was a heart-breaking end to the tournament for the young fan, who three years later would migrate with his family to Australia as refugees, adopting the name Les Murray for the rest of his life.

Down Under, Murray rose to become a legendary figure in Australia’s sports media industry.

In a unique country where Australian rules football, cricket, rugby union, rugby league and even golf rule the roost – Murray’s journalism and broadcasting skills, as well as deep knowledge of football (soccer as they will call it) – gave impetus to the growth of the sport across the vast island nation.

Australia’s national football association honoured him in 2003 with induction into its Hall of Fame, in addition to being awarded the Member of the order of Australia in 2006.

So, in 2005 I met Murray in Germany – as part of 12 international journalists from 12 countries across the globe – invited by the federal government to cover preparations for the football World Cup staged there the following year.

We found him to be an inexhaustible fountain of knowledge, a walking encyclopaedia, in matters of world football.

For a guy who had covered big tournaments, interviewed the best footballers on the planet, and hobnobbed with some of the world game’s most powerful personalities, I was pleasantly surprised that Murray knew a great deal of football in my own country, a place he had never been to but desired to visit.

If he ever came to Zimbabwe in his lifetime, he told me, he would not leave without humbly requesting a meeting with George Shaya.

A national team from Rhodesia, as Zimbabwe was known before 1980, played against the Australians in 1969 in World Cup qualifiers, a three-match series whose legendary tales live to this day.

Because the rogue nation of Rhodesia was shunned by the rest of the outside world, the qualifiers – initially scheduled over two legs – had to be played in a neutral country because the Rhodesians would not be allowed into Australia.

Lourenço Marques, the Mozambican capital later to change its name to Maputo, was chosen as the venue.

A Rhodesia side overflowing with attacking talent, notably the frontline led by poster-boy Shaya and the free-scoring Bobby Chalmers, crossed the border into Mozambique for the showdown against the over-confident Aussies.

Based on thorough research in the post-digital era, Murray – then an aspiring journalist making baby steps in the profession – had done his research on the Rhodesian players, despite being unable to travel to Mozambique.

He particularly took interest in Shaya, a stylish forward-cum-playmaker gifted with defence-splitting vision and ability to get into good positions and score crucial goals himself.

Over a drink at a Munich café 16 years ago, Murray told us that word of Shaya’s potential threat quickly spread within the Australian squad upon arrival in Mozambique. It was spoken of in the corridors of their Lourenço Marques hotel, and during meals in the dining area.

After the original two-match schedule ended in draws, 1-1 and 0-0, an extra third match had to be hastily arranged to decide the winner. Australia eventually won 3-1, but later lost to Israel for a place at the 1970 World Cup in Moscow.

From home in Australia, Murray followed the three matches in Mozambique by every means possible, and through some footage brought back by travelling colleagues.

Something about Shaya reminded him of the great Eusebio, who incidentally was born in Mozambique: the deft footwork, elegance, movement of the ball.

There was also the low centre of gravity that allowed both players good control of the ball, Murray said.

At the end of that year, Shaya was befittingly crowned Rhodesia’s Soccer Star of the Year, the first of his record five awards.

I of course never watched Shaya play. To many, mostly older generation, he is simply the greatest ever from this country. We all have our own personal favourites, and for me I always go with Peter Ndlovu. But we all know that Shaya’s place in history was guaranteed more than four decades ago.

My closest interaction with this iconic of Zimbabwean football was when he was an official of the club that he achieved fame with, Dynamos.

With his quiet presence and calm demeanour, he always appeared like an unwilling leader during his tenure as Dynamos’ board chairman.

It then came as something of a surprise around 2008 when a faction led Shaya would plunge into the thick of a bitter battle for control of the club, pitted against a camp controlled by the aloof Richard Chiminya, the embattled club boss at that time and a founding player who would resort to vicious tactics to outfox the opponents.

I covered the saga extensively for a local weekly, and I remember having regular interaction with Shaya’s men because they were more accommodating and enthusiastic to outline their vision for the club, especially the suave and eloquent Morrison Sifelani, also a pioneering player.

Others on Shaya’s side who were good sources of news were Bernard Marriot, Ernest Kamba and Isidore Sagwete.

As the conflict reached fever pitch, it suddenly turned nasty in a manner one could never have imagined.

Brandishing a club electoral college ruling in their favour, I was alerted that Shaya’s group had decided to give it a last throw of the dice by storming the club’s head office in Eastlea. They would then seize control of the rented headquarters, and declare themselves the new executive.

Prominent figures like Sifelani and Marriot stayed away, so Kamba was tasked with leading a small group of the Shaya clique on the mission.

It was a miscalculated move. They had clearly underestimated Chiminya, an older brother of senior Zanu-PF official and Cabinet minister Ignatius Chombo, himself an interested party in the club.

Accompanied by a company driver and a photographer to witness the dramatic coup, we parked strategically, a street away within sight of the offices, at the instruction of our source who as it turned out rightly predicted the consequences of their actions.

As soon as the takeover crew forced their way into the closed offices, a group of menacing young men disembarked from a minibus armed with an assortment of weapons: sticks, stones, iron bars.

Quick as a flash, the gang scaled the premises’ fence, into the offices, where the new occupiers had made themselves comfortable.

They were ambushed and brutally assaulted in a sickening and sadistic attack, their assailants inflicting harm like enraged animals. It was a 10-minute reckless disregard for life and limb that can only come from a heart so hard and a soul so dead.

From the safety of our car, we heard grown men crying, the kind of frightened last cry for mercy that you produce when a cold-hearted attacker is about to deliver the fatal blow.

After the battering, we saw the goons leave in their waiting vehicle, red-eyed and clearly high on some powerful substance, emotionless about the permanent damage that they had caused.

We made sure they had left, that we were safe, then we entered the offices to examine the damage.

There was blood on the floor, literally. The people inside spread on the surface, writhing in agony. Fortunately, everyone was conscious. But thy had been badly injured.

Kamba, a yesteryear player who was now in his 60s and walked with a limp, was shaken. He was in great pain and he bled from the head, his suit stained.

I was suddenly besieged by thoughts: what if Shaya had been there himself to lead this foiled club takeover? What would they have done to him? To this day, I’m still convinced that the callous hired thugs would not have spared him. They probably would not have known who he was, drunk in their barbaric and indiscriminate attack on everyone in sight.

The great George Shaya mercilessly pummelled by brutes hired by a rival club faction? I wondered how this would have been reported by a national media that had been deeply poralised over the Dynamos control saga due to the politics surrounding it.

Not that those that were brutalised that afternoon, and bear permanent scars, matter less. I still wonder what a similar savage assault on Shaya, the club’s greatest player of all time, would have done to Dynamos: the team’s reputation, its history, its culture, and everything else that it stands for.

That day in 2008 marked the defeat of the Shaya faction. Who would dare have stony-hearted, politically protected hoodlums unleashed on them again?
Richard Chiminya continued as Dynamos chairman until his death in 2012, preceding Shaya, who passed on this week at the age of 74 following a long battle with illness.

As for Les Murray, he died in 2017, before he had fulfilled his desire to visit Zimbabwe and meet the man he associated with greatness, after he was charmed by masterly glimpses by a Mastermind.

‘A gold medal made in Zim’