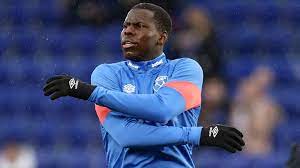 A DIFFERENT way of looking at the hefty fine of 250 000 pound sterling imposed on Kurt Zouma (pictured) by his English Premiership club West Ham, for physical aggression against his cat, may help in some small way in dealing with other issues of rights abuse affecting the wider world today.

Uproar has been sparked across the globe over the heavy sanction against Zouma, a French-born footballer of Central African Republic heritage. It is the kind of reaction that is completely understandable, given previous incidents in which famous footballers in the United Kingdom got away with just a slap on the wrist for similar offences, if not worse.

In 2013, Chelsea star Eden Hazard was handed a three-match ban for violent conduct, after he kicked a teenage ball boy in utter rage.

The contrast in the severity of the punishments meted out sticks out like a sore thumb, no wonder the collective anger we have witnessed.

Let us pose for a moment, though, to reflect.

11 years have since elapsed since Suarez’s racial slur against Evra. Hazard attacked the poor ball-boy nine years ago.

Now, would both Suarez and Hazard escape with the same lenient sanctions had they committed the same violations today, in 2022?

Similarly, was Zouma likely to be so heavily punished had he been recorded hitting his pet back in 2011 or 2013?

Let us explore the possibility that Zouma might have been caught at the wrong time in the world today – during a current global movement following the callous murder of African-American George Floyd by a white policeman two years ago – a gross act that perhaps has given the world a new sense of awareness towards issues of race, and maybe even towards other universal virtues like animal rights.

If that is the case, let us draw a parallel with the raging case of South Africa cricket coach Mark Boucher, who is being probed for allegedly using the term “brown sh*t” in reference to a former national teammate Paul Adams, who is of mixed race.

Cricket South Africa (CSA), Boucher’s employers, appear determined to get rid of the ex-Proteas wicketkeeper, on the basis of a racial insult made in the late 1990s when such stuff was said by some out of ignorance and naivety because of the era, maybe even without deliberate intent to cause hurt.

But racism is racism.

Likewise, so are rights abuse and violence. No excuse for it.

So, if today Kurt Zouma is being severely punished for abusing his cat and Mark Boucher is being investigated for racist words used two decades ago – because of a supposed new attitude of humankind in the world – then there is a strong argument in revisiting old cases like Suarez’s and Hazard’s, which were not handled justly because time was not ripe.

The distressing misfortunes of Tari Musakanda