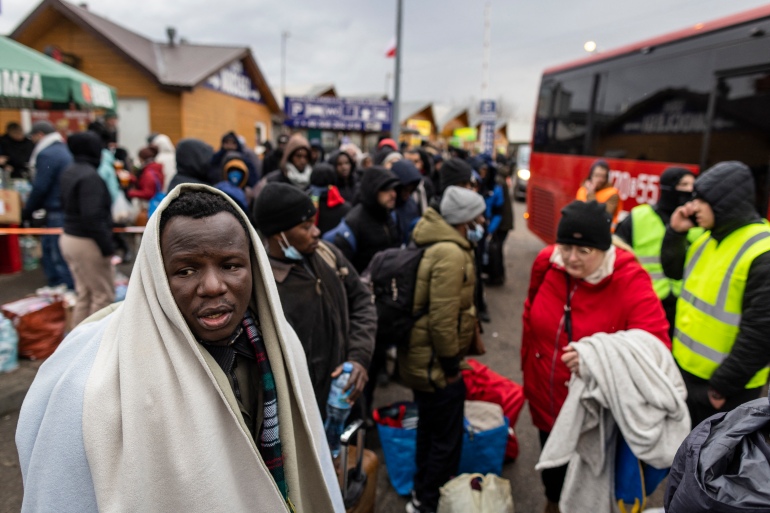 WHILE the invasion of Ukraine by Russia and the subsequent campaign of bombing, killing and destruction, as well as displacement of Ukrainians on a massive scale, was alarming, one thing was unexpected in all this: Racism.

In the midst of Russian attacks and killings, some people still had time for racist indulgence. Imagine how those people would be like in peaceful times.

Stories and video footage of incidents in which black people were being barred from jumping into buses and trains began to filter through a few days into the invasion. They initially appeared like isolated cases, but as time went by it became clear it was widespread and systematic.

That seemed to reflect not just aberrations, but entrenched structural racism in society.

The scenes of blatant discrimination shocked the “civilised” world; not the one some Western media outlets usually talk about, but the one that embraces humanity regardless of colour, creed or religion. That’s what being civilised should mean at least.

For one can’t be a racist or a tribalist, and still claim to be civilised while harbouring primitive instincts.

Just when people thought the barring of black students from using buses and trains to run away from Russian shelling and bombing was bad enough, then came the problem of prejudiced reportage and commentary.

Trying to put context and dramatise the Russian invasion, some reporters, correspondents and pundits veered into a troubling narrative on race, class and status.

These racist scripts started describing Ukraine as more “civilised” than other countries, such as Iraq, Afghanistan or Syria. Inevitably Africa was in the frame.

In a CBS News bulletin, senior foreign correspondent Charlie D’Agata, reporting from Kyiv, said Ukraine “isn’t a place, with all due respect, like Iraq or Afghanistan, that has seen conflict raging for decades. This is a relatively civilised, relatively European — I have to choose those words carefully, too — city, where you wouldn’t expect that or hope that it’s going to happen.”

That went viral, and D’Agata, a veteran war correspondent, had to apologise, saying he had “used a poor choice of words” which he regretted.

Perhaps, but that seemed to be subliminal racism.

ITV News correspondent Lucy Watson filed from a train station in Kyiv that the “unthinkable” had happened to the people of Ukraine. “This is not a developing third-world nation,” she said. “This is Europe.”

On BBC, David Sakvarelidze, former deputy prosecutor-general of Ukraine, made it worse: “European people with blue eyes and blond hair being killed, children being killed every day” in his country.

Daniel Hannan, a former Conservative member of European Parliament, fuelled the problem in London’s Telegraph newspaper: “They seem so like us. That is what makes it so shocking. War is no longer something visited upon impoverished and remote populations. It can happen to anyone.”

Analysts say these remarks reflect Orientalist concepts of “civilisation” that have long been present in European colonial discourse and narrative. War is made to appear like an African or Middle East phenomenon, not an economic, territorial or geopolitical contestation.

It is not even acknowledged or understood by some that most wars in Africa and the Middle East, for instance, have roots or links with global power matrices and geopolitical manoeuvres by big powers. Wars in most resource-rich countries are started or fuelled from outside. Or outsiders profit from them.

Global media, in fact all media, has an obligation, not just to do the basics; that is report factually, impartially and truthfully, but also watch out for pigeonholing news and lacing stories with prejudice and stereotypes, some racist or tribal.

People should be busy focusing on understanding the root cause of the Ukraine war, its historical and geopolitical dynamics and impact; addressing its resultant humanitarian crisis and finding lasting solutions to it.

Will there be nuclear war because of Russia’s invasion of Ukraine?

Nuclear weapons threat: Who has what stockpile at a glance