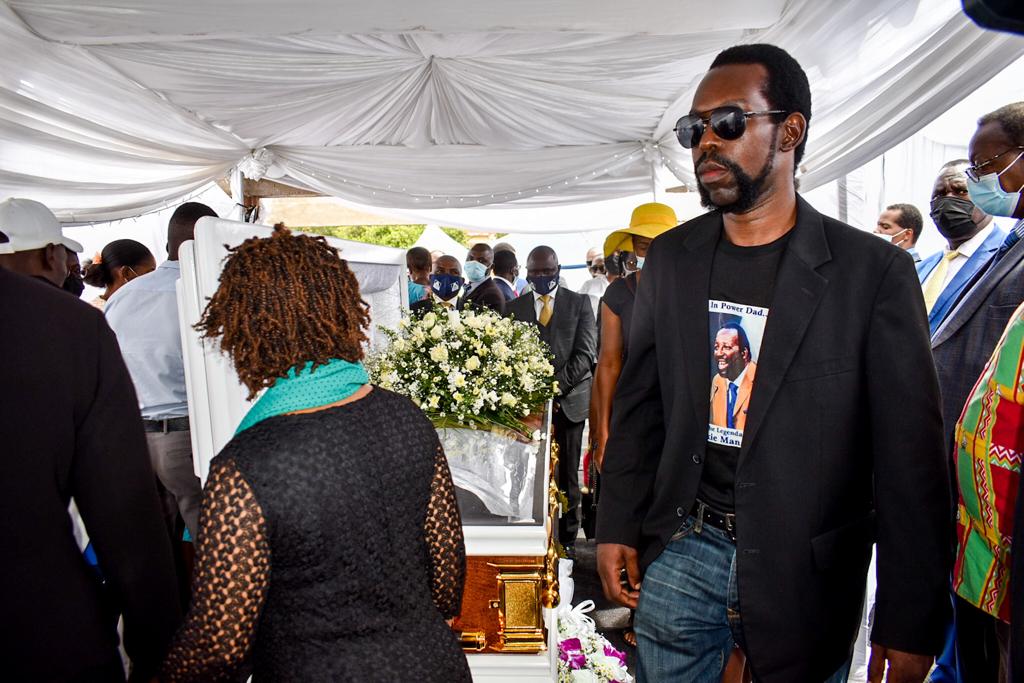 A tall, lanky and bearded figure in the crowd caught the attention of nearly every mourner at Warren Hills Cemetery in Harare this week.

The curious gazes were triggered by the unknown easy-going fellow who bore a striking resemblance to the legendary Zimbabwean musician who was being buried that afternoon.

And nobody outside the late Zexie Manatsa’s immediate family seemed to know who the chap really was.

But what added to the curiosity was that the Manatsa children and other family members clearly knew who he was, and they related with him just like one of their own in full glare of everyone.

Clad in a black T-shirt bearing the image of the dearly departed Manatsa, Givemore Madziya certainly sent whispers swirling around the graveside on the day.

“Just who is he? Another son of his?”

Indeed, he is the “love child” of the man that was being laid to rest on Sunday afternoon before multitudes of adoring fans as well as the who’s who of Zimbabwean society.

Manatsa, the Tea Hobvu hitmaker, lost his battle with cancer last week at the age of 78 to plunge a cross-generation of his fanbase into mourning.

Ironically, Givemore is 39, the same age his father was when he was conceived out of wedlock years back.

But for this father of one, his upbringing – without his biological father – does not stir any bitterness at all.

After he was born in 1983, his mother met a soulmate, who raised Givemore with the same fatherly love that he gave his own biological children.

Growing up in Chitungwiza, Givemore never felt any different from his maternal siblings.

“No matter the circumstances, I have no regrets about my upbringing,” Givemore told The NewsHawks during the funeral wake.

“It is every child’s dream to be raised by his or her parents. However, my step-dad covered that gap and I’m forever grateful for that.”

Whilst he adores his stepfather – thoroughly grateful of the way he was raised into the man he is today – Givemore grew up conscious of his heritage and he proudly followed his biological father’s stellar music career.

And in his singing son, 14-year-old Munashe, Givemore reckons the clan’s musical legacy is well and truly secured.

After the death of Zexie Manatsa, the most prominent musician in the family is Tendai Manatsa, who befittingly is married to Selmor, the diva daughter of the late Zimbabwean music icon Oliver Mtukudzi.

Touchingly, while Givemore grew up in a different family set-up altogether – in Chitungwiza’s bustling township of Zengeza – he speaks of a cordial relationship since childhood with the rest of the Manatsas, who enjoyed a more privileged upbringing in some of Harare’s quieter neighbourhoods.

“The bond is unbreakable,” he said.

“I interact well with them: Tendai, Green, Aaron, Freedom and Taku. We also have our four sisters by the names of Priscilla, Sarah, Memory and Joy. Only Priscilla was missing at dad’s funeral due to circumstances beyond her control.”

Indeed, cross-family unity was on full display at Warren Hills.

All the Manatsa children, Givemore included, could be seen huddling together for selfies, in celebration of their iconic father’s life and music legacy.

“The song has ended,” Givemore commented.

“But the melody lingers forever. My dad’s music must inspire even the next coming generation.”

I will not let my illness get me down: Mature