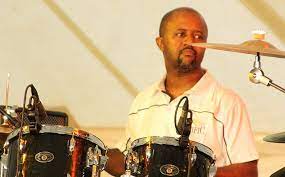 SAM Mataure has been in music for so long that he cannot imagine life without it.

The acclaimed Zimbabwean drummer is however going through a difficult phase in life and is on a recovery path after suffering a stroke in 2019.

But the music has not really stopped for the well-travelled star, best known in music circles for his long-time role as manager and drummer for the legendary Oliver Mtukudzi.
For now, he is using his right hand to play the drums.

Quite unusual, but the beauty is that he does not lose a single beat or timing with his one hand playing the drum set.

Those who attended two gigs held in Hatfield and another one in Borrowdale would attest that it was business unusual.

For veteran drummer, who is now showing signs of recovery, said his lifestyle has changed drastically since he stroked three years ago.

“For the past two weeks, I have been playing drums for Victor Kunonga because I do not want to let my illness get me down,” he explained.

“It has been mostly one hand because my left hand was badly affected by the stroke so I have improvised using only one hand to play the drum set. The sound comes out perfectly well. I don’t miss a single beat.”

The 54-year-old drum maestro does not need much introduction, having worked with big names in music.

Whilst he plays, Mataure is also busy coming up with a programme to restore him to full health.

“What I would need now is perhaps hitting the gym and find someone who can assist with working out,” he said. “You know with stroke you cannot say when you will be up and running but I am taking one day at a time. And also you cannot rush anything, the recovery is a slow process.”

According to Mataure, the sudden twist of fate took him by surprise, although he had been forewarned.

“Sometime in 2017, I went to South Africa for a gig and I decided to visit a doctor. That doctor checked my health and wellness and he warmed me that I could suffer heart failure. At the time I didn’t take him seriously because I felt no pain. It was only in 2019 that I was hit by a stroke but luckily it wasn’t that severe. Had it been that bad, we could be talking something different now,” he said.

But Mataure is not alone on the recovery path as friends and relatives are always by his side.

“Of course, I still have my old friends who check up on me, including Daisy, the widow of legendary Mtukudzi, and also my family members who always check on me,” he said.

“The good thing is I am not angry at anyone because obviously some people come and go, others remain. People do have a choice, but I wouldn’t force anyone to stick by me because I’m down or because I used to work with them when I was fit.”

That positivity is what is keeping him going although he admits that his biggest setback in his career was the sad loss of Blacks Spirits founding leader Mtukudzi.

“Obviously, my life changed because I knew Mdhara Tuku the longest and that alone speaks volumes,” he said.

When pressed to comment on his relationship with Mtukudzi, he said: “We were so close so much that when Mdhara (Tuku) died there was a gap. Definitely things changed although at the time I had left him due to health-related issues. His death affected me and this thing of people saying I used to get kickbacks while I was his manager is unfounded. It is like you guys (journalists), do you get money from people you write about? However, I value every other artiste that I have worked with. It opened more doors for me in my career since I moved to Harare in 1994 from a small town like Mutare. Most of my dreams came true”

“For me it is an ongoing thing. If I cannot play music anymore, then I should look elsewhere like artiste management or conducting workshops. If I had my way, I would still want to record with Soul Jah Love and other young artistes.”

He has already lined up a Thomas Mapfumo Tribute dinner where artistes, promoters and journalists will be invited.

“The idea is to say thank you to Dr Mapfumo while he is still with us. The dinner will include a pre-recorded message from him, that’s if he cannot attend. Just like what people do with Bob Marley commemorations, the legend isn’t there anymore but people still hold the shows,” he said.

The tribute dinner is slated for 19 February 2022 in Harare and then there is the Chimanimani Arts Festival scheduled for 15 to 17 April 2022.

Both shows are being put together by Mataure.