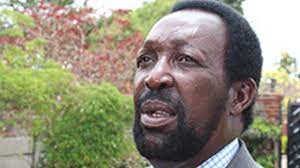 Legendary musician Zexie Manatsa of the Green Arrows has died at age 78.

The Tea Hobvu singer succumbed to cancer only two days away from his in-law and fellow musician Oliver Mtukudzi who died on January 23, 2019.

His son Tendai Manatsa announced Thursday that his “hero had gone!”

“With great sadness we would like to let everyone know that Our Father, Our Legend, Pastor and Sekuru Zexie Manatsa, has succumbed to cancer. May his dear soul rest in peace.”

In December 2021, Manatsa announced on his Facebook page that he been diagnosed with Multiple Myeloma, a cancer of plasma cells than can cause damage to the bones, immune system and kidneys.

“My wonderful family, friends and fans, today I would like to let you all know that I have recently been diagnosed of a cancer known as Multiple Myeloma.

“With the guidance from medical professionals and the support of my family, I am currently undergoing treatment to manage the condition.

“While undergoing treatment, I have chosen to spend quality time with my family and hope to get some peace and quiet while doing so,” wrote Manatsa on his Facebook page.

Earlier, in an interview with Gem Nation News in May, Manatsa said he was also battling with arthritis as old age took a toll on him.

This was largely induced by injuries from his 1987 car accident which nearly claimed his life.

He suffered back and leg injuries causing him to limp.

According to medical experts arthritis is the swelling and tenderness of one or more of your joints.

The main symptoms of arthritis are joint pain and stiffness, which typically worsen with age.

The accident occurred on the eve of his album launch on 12 September 1987 which featured the song Highlanders, a dedication to his wife Stella’s football team.

The song Highlanders became an instant hit but Manatsa never enjoyed the popularly wave after he was left in a comma for three weeks.

His wife Stella of 49 years, told this at an event where the family received cement donations from football teams which Manatsa composed and wrote songs for.

The teams are Dyanamos, Highlanders, CAPS Utd and Zimbabwe Saints.

Each of the teams pledged one tonne of cement to the legendary Manatsa who retired from public performance in December 2019 to focus on his ministry.

“When my husband started out his music career I thought he was just entertaining people not knowing that he would be recognised this way.

“Whenever I go back to my village they treat me like a celebrity because they read about me in the papers and also see me on television. Where I was born there are no celebrities but thanks to Manatsa I am now celebrated because of him,” she said at the time.

Manatsa and Stella threw one of the biggest weddings ever in Zimbabwe at Rufaro Stadium where the likes of Oliver Mukudzi, Tinei Chikupo and Thomas Mapfumo performed to a packed arena.

Manatsa has a rich discography which set him apart from his contemporaries.

In 2020, Manatsa was named at one of the National Art Merit Award Legends @40.

According to a citation, the granddad of Zimbabwean music was a revered singer, songwriter and bass player.

He is known for his several hits released while fronting the Green Arrows. Zexie was born on 1 January 1944.

He launched his musical career in 1959 in Mhangura, Zimbabwe, at the age of 17 with his young brothers performing covers as Mambo Jazz Band.

He formed the Green Arrows Band in 1968 after relocating to Bulawayo, for which he provided lead vocals and played bass and they played cover versions of popular songs.

In 1972, the Green Arrows began writing their songs to mass appeal. South African saxophonist West Nkosi, who was also a consultant for Gallo Records, discovered the band and became their producer in the 70s. The resulting album, “Chipo Chiroorwa”, sold so well and the band moved to the capital city of Harare.

In 1979, Manatsa made history when he got married to his long-time partner, Stella where he chose Rufaro Stadium as the venue for the wedding, and fans would pay $1 each to witness the ceremony. On August 25, 1979, Rufaro Stadium was full to the brim with excited fans who had come to witness the amazing “Wedding of the Year”.

Manatsa’s low, raspy lead vocals and bass playing defined the group’s sound, while his brother Stanley played the lead guitar. Manatsa remained popular in the post-independence era, producing hits such as Chivaraidze and the swooning Tii Hobvu. Zexie is with no doubt the father of pre-and post-independence Zimbabwean music as he was instrumental in playing traditional music as evidenced by his hits such as Madzangara Dzimu, Nyoka Yendara, Mudzimu Ndiringe, and Tsuro, songs which had pro-liberation innuendos. Many guerillas had used his house as a base and he had become a marked man by the Smith regime for singing pro-liberation songs.

While working in Bulawayo in the 1960s, Zexie encouraged the inclusion of musical skills at Jairos Jiri Centre and through his efforts, the first Jairos Jiri Band known as the Sunrise Kwela Kings was formed.

Manatsa thus played a key role in giving guidance and support for success to many top Zimbabwe.

Asaph’s record deal will open the door for other artistes