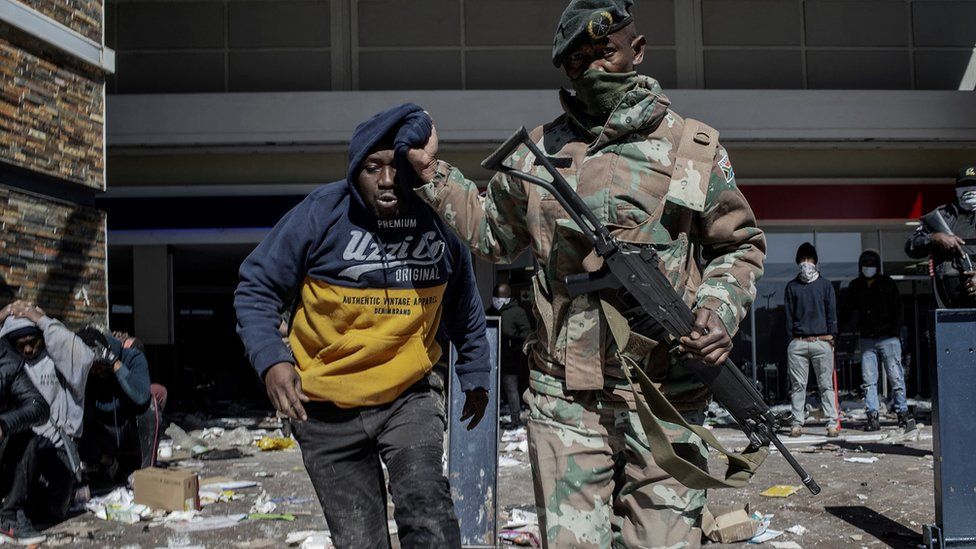 HISTORY tells us we owe it to Klemens von Metternich, the distinguished 19th-century Austrian statesman and diplomat, one of the most famous phrases about the global economy and its dynamics.

In an era when Europe dominated the world amid the Industrial Revolution in the aftermath of the French Revolution in 1789 and the Napoleonic Wars between 1803 and 1815, he came up with the line: “When France sneezes, Europe catches a cold.”

With the rise of the United States, it has been adapted to: “When America sneezes, the world catches a cold.”
It remains true today.

However, it is fast changing as China rises.

In Africa, it aptly fits South Africa, especially in the region.

Economists warned Zimbabwe should brace for renewed problems as the violent protests in South Africa could result in trade losses of over US$340 million per month. This could also lead to a resurgence of inflationary pressures in the long run, they said.

Zimbabwe annually exports about 40% of its output – worth about US$2.3 billion – to South Africa, while it imports about 50% – valued US$2 billion – of its needs from its powerful southern neighbour.

The violence, rioting and looting which erupted in KwaZulu-Natal and Gauteng provinces in the aftermath of the incarceration of former president Jacob Zuma for contempt of court has resulted in 212 deaths – and counting – as mobs ransacked shops and burnt infrastructure in political, social and criminal outrage.

Business leader Busisa Moyo, who is also United Refineries Ltd chief executive, warned this week the turmoil in South Africa would affect the entire region, especially Zimbabwe which heavily depends on the port City of Durban, for trade. With the N3 road transport corridor disrupted and closed, Zimbabwe is directly affected.

“We will feel the heat in the next few days. Conserve cash, food, raw materials and other necessities,” Moyo said.

Moyo, who is also a member of President Emmerson Mnangagwa’s Presidential Advisory Council and the Zimbabwe Investment and Development Agency chair, was expressing apprehensions of many when he said this.

“The violent protests will seriously impact Zimbabwe’s trade with South Africa valued at over US$340 million per month,” her said.

“The burning of property, especially haulage trucks, warehouses and gun violence will disturb the flow of raw materials as we are already experiencing delays. The port of Durban is the trade gateway for most Sadc countries.

Exports movement will also be slowed down by the unrest and violence depending on how long the protests will last. This will lead to temporary shortages of raw materials and other commodities.”

The Confederation of Zimbabwe Industries, of which Moyo is a previous president, says 58% of the country’s raw materials come from South Africa.

South Africa is also home to an estimated three million Zimbabweans and millions of other foreign nationals that provide critical skills in the most affected provinces of Gauteng and KZN.

Zimbabweans in South Africa contribute hundreds of millions of dollar in remittances back home. The country receives about US$1 billion annually from its diaspora community.

Bhoroma said the situation could get even worse if the violence fuels  xenophobia and closure of markets.

Tawanda Purazeni, an economist, said the civil unrest in South Africa would have a negative impact on Zimbabwe given the economic integration between the two countries.

“Zimbabwe is dependent on South Africa for most of the basic goods we find in our retail outlets. We should brace for serious shortages of goods and services due to the ongoing looting and destruction of the productive lines and infrastructure. This will also trigger inflationary pressures. If this situation persists, we are bound to be worse off as a country,” he said.

Another economist Clemence Machadu said the instability across the Limpopo River should be of particular concern to Zimbabwe, given the deeper economic ties between the two countries.

“One can also look at it in terms of the millions of Zimbabweans who are economic migrants in South Africa, and remitting money to their families back home,” he said.

“The destruction of infrastructure might also affect their jobs, which may in turn affect remittances. So, it is my hope that the situation in South Africa will be addressed at the earliest convenience in order to bring stability in the whole region.”

While the South Africa government struggled to contain the riots at the beginning, the situation seems to have been contained following the deployment of the army to beef up the police.

President Cyril Ramaphosa said yesterday his government was ill-prepared for the uprising.

The conflict in South Africa could also affect Zimbabwe’s economic plans. Zimbabwe targets to grow manufacturing exports by 4.1% in 2021 from an estimate of 3.6% in 2020.

This will be achieved through focusing on diversifying exports into non-traditional markets and exploiting existing preferential trading agreements with various countries, the government says.

Furthermore, Zimbabwe will strive to benefit from the vast Africa Continental Free Trade Area with about 1.3 billion people and over US$3.4 trillion in GDP in terms of exports.

In terms of export earnings, minerals brought in US$2.4 billion from January to September last year, compared to US$2.1 billion recorded over the same period in 2019.

In 2021, the mining industry is projected to rebound by 11% driven by planned expansion programmes aimed at increasing production by miners as we move towards the attainment of a US$12 billion industry, the government says.

Export earnings have been the main source of funds for the auction through voluntary liquidations and the surrender requirements on exports and domestic foreign currency transactions.

Of the total amount allocated through the auction system, more than 70% has come from surrender requirements on exports and domestic foreign transactions.

“The impact on Zimbabwe was immediate, especially on the financial services sector,” a local banker said.

“This week we didn’t trade much; importers and exporters are not doing business, they are shaken and monitoring the situation.”