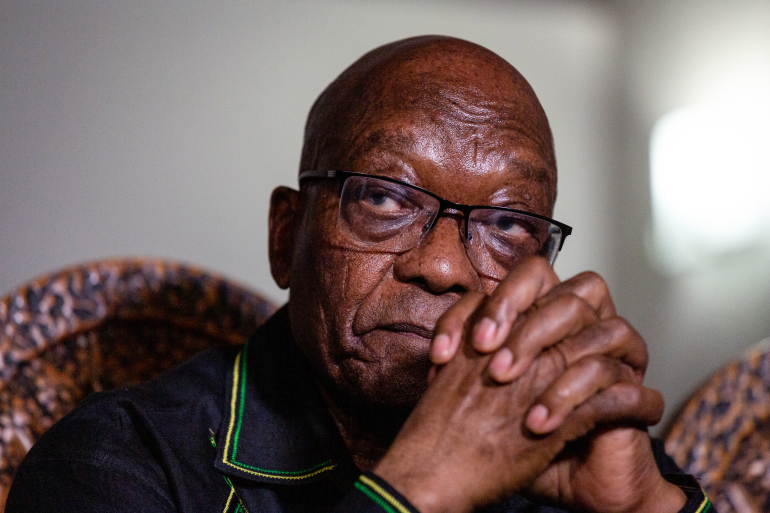 THE turmoil in South Africa following the recent jailing of former president Jacob Zuma and subsequent social unrest characterised by rioting and looting for many other reasons – including deprivation and poverty – has brought a number of critical issues to the fore, including instructive lessons.

Zuma was found guilty of contempt of court by the Constitutional Court on 29 June. He was sentenced to 15 months in jail.

The judgement triggered immediate reaction from his supporters who vowed he was not going to prison.

After refusing to surrender himself to the police for detention, saying he had done nothing wrong and would not go to jail, Zuma finally capitulated and handed himself to Escourt Correctional Centre on 7 July.

But no sooner had he gotten into jail did his supporters, after a brief lull, start violent protests demanding his release.

Before long, the protests deteriorated and degenerated into mayhem, rioting and looting. The upheaval swept from its epicentre in KwaZulu-Natal, Zuma’s home province, across to Johannesburg as malls, shops and stores were looted and burnt.

In the process, vital infrastructure, transport routes and logistics were disrupted and destroyed. This significantly paralysed the economy.

At least 212 people have died so far.

The riots – which have political and social causes – left a trail of destruction and death. Criminality and vigilantism also reared their ugly heads during the crisis.

However, the tumult in South Africa carried some telling lessons. These lessons are still being spelled out for all to see, but they have universal relevance, meaning and resonance, particularly for Zimbabwe.

South Africa hosts an estimated three million Zimbabweans, even though this has never been verified and substantiated. Official estimates are much lower.

What is happening in South Africa is of great importance to Zimbabwe, which under the late former president Robert Mugabe also tried to redress the legacies of colonialism, especially on land and business ownership, through a chaotic and oft-violent approach.

Although Mugabe’s agrarian reforms gave Zimbabweans control of the land and helped some indigenous people into business to control the means of production, his policies devastated the economy and led to the country’s isolation.

That left Zimbabwe broken and reduced to a pariah state, forcing its citizens to flee to different countries, mainly South Africa, primarily to seek economic refuge.

Yet there are many lessons to be drawn from the South African situation. One of them is a rude awakening and reminder that South Africa has what the World Bank deems the highest levels of social inequality on the globe, exacerbated by massive unemployment and poverty.

Leadership, policy and governance failures as well as corruption are also ravaging the nation.

This is an alarming indictment of post-apartheid governments – from Nelson Mandela to Cyril Ramapahosa – and an utter betrayal of the hopes of Mandela himself and millions of South Africans.

Given that South Africa is the most advanced economy in Africa, its failure has far-reaching and devastating consequences for the region and the continent.

Some of the internal issues brought to the fore by South African anarchy include the following:

–South Africa is still contoured and hugely defined by apartheid structures and vestiges economically and socially, hence a highly contested terrain;
–It is an explosive society, a cauldron of racial and ethnic tensions, with violence always simmering just below the surface;
–Society is somewhat like a war zone, and many people are armed with guns;
–The South African state lacks capacity to deal with large-scale violence and chaos;
–The ANC, the ruling party, is deeply divided due to internal power struggles and this has eroded legitimate authority to make collective decisions;
–There are two major ANC factions, one led by President Cyril Ramaphosa and the other by his predecessor Zuma; and possibly a Third Force behind the rioting;
–Ramaphosa is in charge, but lacks clarity of thought on this issue, is indecisive and weak; his measured long game does not work in a crisis;
–The socio-economic situation in South Africa is volatile, explosive and unsustainable;
–Inequality, unemployment and poverty, especially among the youth are ticking time bombs;
Zuma is still popular, but no one is above the law; the rule of law is paramount:

–Consensus that the Zuma issue was mishandled, he should have been convicted of contempt of court and given a suspended sentence, not jailed;
–Dangers of judicial activism; judges should recuse themselves whenever needed;
–Racial tensions still exist. Ethnicisation of politics as well as weaponisation and instrumentalistion of ethnicity is real, yet South Africans are generally against that;
–Leaders should not dabble in ethnic politics like Bantustan politicians;
–The majority of people who went out to protest and loot were less worried about Zuma, but more about their social conditions;
–The “Free Zuma” protest quickly degenerated into ventilation of pent-up emotions and frustrations by the
subaltern over social conditions, thus violence, criminality, looting and lawlessness;
–The perils of personality cult politics, demagogues and populism in a state of flux and conditions of social unrest, unemployment and poverty are serious;
–The majority of South African are peaceful  people who want change and progress in their social and economic situation, but not through anarchy;

–However, rioting and looting, even though unacceptable to many, are direct, effective and pragmatic strategies of challenging the status quo and demanding wealth redistribution to improve lives of the working class;

In the aftermath of the latest conflict, South Africa needs political re-awakening and rebirth; and
There is hope for South Africa given an active, engaging and conscious citizenry re-energised and determined to push for positive change.

These are not isolated issues; they are related, interconnected and their interface is the space where the current contestation in South Africa is playing out.

Yet what stands out is that South Africa has the highest levels of inequality in the world measured by the commonly used Gini index, according to the World Bank.

Inequality manifests itself structurally, through skewed income distribution and unequal access to opportunities as well as disparities along class, racial, regional, gender, and demographic lines.

Low economic growth and unemployment – coupled with the Covid-19 devastation – have exacerbated the situation. The lockdown issue, forcing people to stay at home to starve, was a strong grievance during the riots.

These measures need to be complemented with reforms that promote private investment, job creation and inclusive growth.

When Mandela took over in 1994, through a negotiated settlement that avoided rocking the boat and hence the current structural vestiges of apartheid, South Africa already had deep inequality as a large swath of the population was excluded from economic participation.

South Africa’s Gini co-efficient — an index that measures inequality — increased in the early 2000s and has remained high ever since. Meanwhile, its peers in the emerging economies have made inroads in reducing inequality.
Income distribution remains badly distorted in South Africa.

Significant disparities remain across regions. Income per capita in Gauteng — the economic hub — is almost twice the levels of some provinces.

Subdued growth has jeopardised efforts to promote inclusion. With growth stagnating over the past decade, the economy has not created enough jobs to absorb hordes of the unemployed and new entrants into the labour market.
High unemployment is a major factor behind inequality.

South Africa’s official unemployment rate rose to a new high in the first quarter as construction and trade industries shed jobs. The jobless rate rose to 32.6% from 32.5% in the last quarter, Statistics South Africa said last month. That’s the highest number on record.

Unemployment, including people available for work but not looking for a job, rose to 43.2% from 42.6% the previous quarter.

The number of discouraged work seekers surged by 201 000 people in the quarter.
These are grim statistics.

In the short term, the government needs more scope to further leverage fiscal policy as a redistributive tool.

In the medium to long term, South Africa will need further fundamental structural reforms for more robust and inclusive growth. The focus needs to be on creating a business environment more conducive to investment and job creation.

This requires improved governance, reducing the cost of doing business, opening the market to competition, paying properly for the right skills and productivity, and making state-owned enterprises more efficient.

Policies will also be needed to create opportunities to support the marginalised through improved quality of education, health and transportation.

Strengthening investment, including foreign direct investment, will be critical to propel growth and create jobs.

Although South Africa has made considerable strides in improving the wellbeing of its citizens since its transition to democracy in 1994, progress has stagnated in the last decade.

Structural challenges and weak growth have undermined progress in reducing poverty, which have been heightened by the Covid-19 pandemic.

Progress in household welfare is severely constrained by rising unemployment, which reached an unprecedented 32.5%. Unemployment is highest among youths aged between 15 and 24, at around 63%.

But one thing is certain: it can no longer be business as usual in South Africa.

South African unrest: This is what a failed state looks like