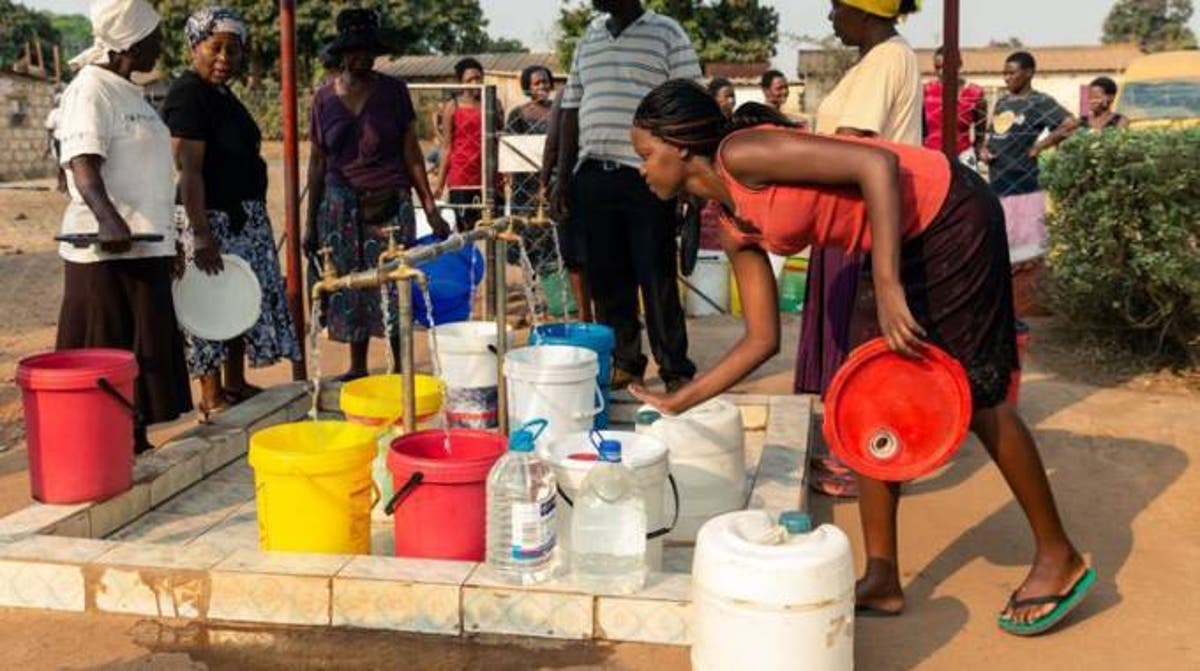 WHILE Bulawayo’s water woes are proving to be a pain in the neck for city residents, the same cannot be said about some unemployed youths who are cashing in on the crisis.

LIZWE SEBATHA
All that Gilbert Ncube (25) needs is a push-cart, which he uses to ferry water he fetches from wells and bowsers for resale to desperate residents-particularly those who are employed and cannot afford to spend hours in queues.
Dube sells five 25-litre containers of water for no less than US$5 or R100.
“There is a market… It’s only on days when council re-opens taps where there will be no customers,” Ncube says as he wheels his push-cart full of containers to deliver the precious liquid to his customers.
In recent days, business has, however, been low for hawkers like Ncube after the heavens opened up, enabling the residents to harvest rainwater.
Flash floods hit Bulawayo on Monday, destroying household property in the worst affected suburbs such as Pumula, Nketa, Emganwini, Nkulumane and Cowdray Park where houses were waterlogged.
And last week on Tuesday, the Meteorological Services Department (Met Office) said rains received in Bulawayo the previous day broke a two-year record.
“We recorded 29mm of rain in Bulawayo this afternoon after a 20-minute-long spate and it’s the highest ever recorded this year, considering that even last year we did not have good rains,” the department said in its update.
However, Bulawayo’s water woes are far from easing, as confirmed by the city council’s update on dam inflow showing that the city’s supply dams have received just over 2% inflow despite the heavy downpours and flash floods.
Insiza Dam had the highest inflow of 768 348 cubic metres; Inyankuni (98 490 cubic metres); Umzingwane (278 760 cubic metres); Upper Ncema (311 900 cubic metres); while Lower Ncema had no inflows at all with Mtshabezi Dam actually recording a deficit of 16 000 cubic metres. At present, the city’s supply dams are 23.53% full with indications that if no significant inflows are registered, Insiza and Mtshabezi dams will run dry in March and September next year.
Council decommissioned Lower Ncema, Upper Ncema and Umzingwane, leaving the city with only Insiza, Inyankuni and Mtshabezi as the main water sources.
“Despite the heavy rains, we have not noticed significant inflows to our dams. We need such (heavy) rains in Bulawayo, but where our dams are situated (is problematic). The situation is not pleasing but depressing,” deputy mayor Mlandu Ncube said on Tuesday.
“The situation in our dams needs heavy rains of a cyclone nature… For now, we can only urge residents to continue harvesting from rooftops and so forth while also praying for rains to fill up our dams.”
According to Ncube, the other solution to addressing the water woes lies in the government declaring the city a water crisis area to allow the council to mobilise resources needed for water shortage alleviation projects.
“We reiterate that the crisis we are facing can only be addressed after the government declares the city a water shortage area,” Ncube added.
The city council in January 2020 wrote to the Local Government ministry requesting that Bulawayo be declared a water shortage area.
In response, the government hired consultants to study the water situation and, in their analysis, they blamed the council for lacking the technical know-how of drawing water from depleted dams.
“As long as they have not declared the city a water disaster, we have a challenge. This is the reason why the Treasury will allocate measly budgets to Bulawayo to solve water problems. You cannot fault the Treasury in its budget allocations.”
Finance minister Mthuli Ncube allocated ZW$4.5 billion towards the Gwayi-Shangani dam construction project in his 2021 national budget.
However, in a recent meeting, BCC director of engineering services Simela Dube said: “So far funding worth US$200 million was raised but to complete the project that will cost around US$1 billion…”
An amendment of the 1976 Water Act provides for the central government to be responsible for raw water sources for local authorities through the construction of dams.
Councils are only left with the duty of treating raw water and distributing it.
No dam has been constructed for Bulawayo since 1975. Bulawayo water supply dams were constructed by the colonial regime. Lower Lower Ncema was built in 1943 and Upper Ncema 1974, Inyankuni (1965), Umzingwane (1956) and Insiza (1975).
Gwayi-Shangani Dam, now at 40% completion, will supply bulk water to Bulawayo. Upon completion, it will be the third-largest inland dam in the country after Tugwi -Mukosi and Lake Mutirikwi in Masvingo with an estimated net holding capacity of 634 million cubic metres, which is 1,8 times bigger than the capacity of the city’s six supply dams located in Matabeleland South. In the meantime, hawkers like Dube say they will continue cashing in on the water crisis.
“At least we are not stealing, or gambling but getting paid for bringing water to people’s homes,” Dube says.

Related Topics:BulawayoWater Crisis
Up Next