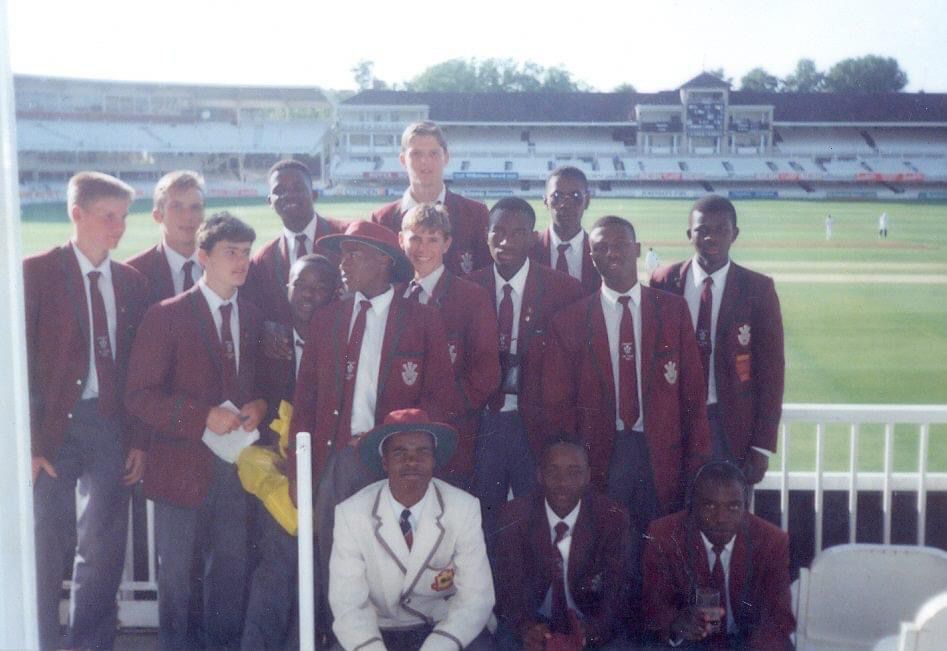 Procter Saurombe (in the maroon floppy hat, middle row) with the Prince Edward team at Lord's on the 1995 UK tour.

ONE of the most promising township cricketers of the ’90s, Procter Saurombe, has been found dead on Monday morning after a freak accident in which he was pierced by sharp security spikes on his family home’s gate, which he was trying to jump over.

Saurombe, who was 43, is believed to have returned home in Glen Norah in the early hours of Monday after a night of drinking.

A disturbing picture of the horrid incident that has circulated shows the former Old Hararians fast bowler’s lifeless body hanging on one spike after failing to scale the gate, blood running down his leg all the way down to the ground.

Brought up in Harare’s high-density suburb of Glen Norah, Saurombe was introduced to cricket at Shiriyedenga Primary School in the area through the Zimbabwean cricket board’s once thriving grassroots development programme.

Saurombe had enough talent to earn a cricket scholarship at Prince Edward School in the early ’90s, where in his later years he gained the reputation of generating good pace and bounce despite his diminutive stature.

At Prince Edward, he rose through the different age-groups, up to the first-team, touring the United Kingdom with the side in 1995.

It is considered to be the best team Prince Edward has assembled in the post-Independence era, and all but Vermeulen, of the above-mentioned players, were gifted scholarship beneficiaries from Harare’s black townships.

From among the bursary recipients, only Mutendera went on to play international cricket for Zimbabwe, the first player from the high-densities to represent the country at the highest level.

Saurombe told this writer five years ago that his given-name, Procter, came from his father, a cricket fan who had been captivated by the heroics of South Africa Test star Mike Procter.

On top of umpiring club matches, Saurombe had been coaching cricket at his former school Prince Edward for a number of years, a job he held until his tragic death.

Winning is all these Sables newcomers know