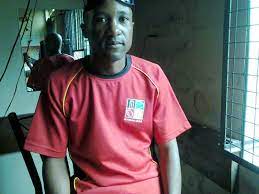 A GRIEF-STRICKEN friend of deceased ex-cricketer Procter Saurombe (pictured), Alois Tichana, has revealed how his colleague might have met his fate on Monday morning at the family house’s gate in Glen Norah.

43-year-old Saurombe was found dead in the early hours of Monday morning, hanging on the security spikes of his family’s home gate in Harare’s high-density suburb of Gen Norah in Harare.

Early indications were that Saurombe had tried to jump over the gate and pierced to death by the spikes, after a night of drinking, leading to his death.

But family and friends who have spoken to this publication have pointed out to foul play.

Tichana, who also coached cricket with Saurombe at Harare’s Prince Edward School, says his colleague way waylaid from a bar by a group of people in a vehicle and strangled to death at the gate, before they tried to throw him over to cover up.

A postmortem, which has been moved from Tuesday to Friday, was delayed today because of overwhelming evidence leading to murder, said a cousin who spoke to us.

“He had just been paid his salary in hard cash, so his money and two phones were missing, so (its) definitely a robbery,” Tichana, who coached at Prince Edward School with Saurombe,” told The NewHawks on Tuesday.

“He was followed from a bar in Glen Norah and strangled at the gate.”

Former Mashonaland and Zimbabwe ‘A’ opening batsman Tichana said an elderly neighbour told him how Saurombe could have been killed in those fateful last moments on Monday morning.

“She is old, she told me that sometime in the early hours of Monday whilst she was sleeping, she heard sounds of a car coming to a halt at Procter’s house gate,” Tichana said.

“Then she heard voices of Procter and other voices she wasn’t familiar with. Knowing Procter, and the time of the morning, she assumed he had come from the bar with his friends to accommodate them overnight. So from her room she shouted ‘Procy, pindai mutaure muri mumba vakomama (Boys please get into the house and talk’. She didn’t imagine that Procy was in trouble and being murdered right there at the gate.”

Tichana said Saurombe’s alleged killers then tried to throw him over the spiked gate, to the ground inside. He was left only hanging on a spike.

“He had keys in his pockets, why would he have tried to jump over? No ways,” said Tichana.

“He had never even tried to do that before. I believe Procy was already dead when they tried to throw him over. Akateverwa (they followed him). There is a huge wound on his thigh, but no one ever heard any sounds of him crying out for help. Kana ukabaiwa netsono chaiyo kusvika kwese uko (even if a needle pricks you that deep), will you not scream to attract the attention of neighbours?”

The burial programme of Saurombe, who was single, will be announced on Thursday.

Thanks, lads, your views here have been much appreciated

Tragedy as ex-cricketer dies trying to jump over spikey gate