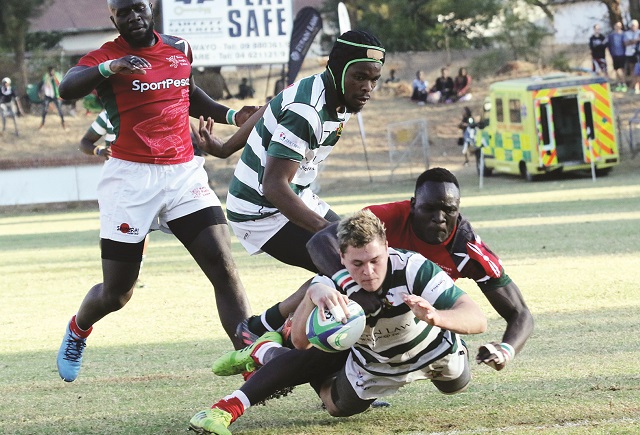 IT is pleasing to note that Zimbabwe’s rugby team continues to get younger and younger — and daring.

The unheralded achievement,  however, was how the Sables fielded some of the most highly regarded young players. These include Munashe Chaitezvi (21), Tawanda Matipano (19), Brendon Marume (19), Declan Ralphs (21), and Aaron Juma (21).

Chaitezvi has recently dominated South African schoolboy rugby with his blistering pace and ball skills. Had it not been for citizenship issues, he certainly would have been called up to the Junior Springboks.

Matipano, Chaitezvi’s schoolmate at St Stithians College in Johannesburg, has a much-needed ability to find his way to the try line. He always seems to finish as the top try scorer for every team he plays for. Against Boland, he crossed the whitewash thrice.

Marume, on the other hand, is a 100% locally-produced flyhalf who can control the game well. With Zimbabwe lacking depth in the number 10 position, Marume can become a long-term plan for that role.

Another area that has given the Sables coaching staff headaches is a hooker that can consistently throw lineouts straight. Harare Sports Club hooker Ralphs has a proven record at schoolboy and national Under-20 level, constantly hitting his jumpers.

As for Juma, he is all heart and hard work, a player who is ready to sacrifice for the team and fulfil any role assigned by the coach. He will be a valuable asset to the Sables in the long term, particularly by demonstrating team spirit.

The Sables management should be commended for managing to convince these exceptional rugby talents into playing for the country, with a World Cup qualification tournament round the corner.

For now, though, focus is on Zimbabwe’s return to the Currie Cup. If these youngsters are given much-needed game time, they could possibly plug the holes in the Sables squad for the qualifiers in France in July.

A position that still requires depth is scrumhalf. In recent games played by the Sables, the quality of service has indicated a need to step up.

In particular, the box kicking by our 9s has not released pressure. It has instead added the pressure with kicks going out on the full.

When you analyse tier-two rugby nations, a level the Sables aspire to be in the near future, the number 9 position is one these teams regularly give to a gutsy young player who is somewhat naïve, but full of energy.

One such example is Shaddy Mandaza, the Pitbulls scrumhalf who is full of guts and has the X -factor. The 19-year-old Mandaza has been playing adult rugby since he was 16, with great success. For the last six months he has been a thorn in the flesh for big clubs like Old Georgians and Old Hararians.

Critics of the Sables management team have questioned the lack of experienced players in the squad.

But all young players that I have highlighted bring a winning culture. They are match-winners in their short rugby careers, they have hardly experienced defeat so far in their journey. This is the kind of culture the Sables need.

Just look at how they casually walked into the team last week, with little training, barely out of high school, and going on to beat a well-respected Boland side.

This is because winning is all they know. On the other hand, the Sables have done well to drop some of the players that have been comfortable with being on the losing side of the scoreboard, players that are content with a narrow loss to Namibia or Kenya.

There is no room for players that crumble in the pressure of big moments. We need a new breed that steps up in these moments, to take Zimbabwe to the World Cup next year.

Tragedy as ex-cricketer dies trying to jump over spikey gate