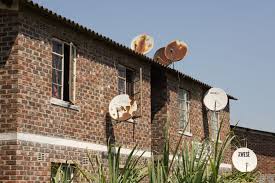 The state-owned ZBC no longer has a monopoly, but that doesn’t mean free-to-air TV in Zimbabwe is any more diverse or varied.

FOR the last few years, John has become accustomed to fielding urgent phone calls or messages at odd hours of the day.

Typically, this leads to a conversation with a desperate client that ends with John sliding into his overalls, gathering his toolbox and makeshift wooden ladder, and hitting the road. His wife used to get anxious at his sudden callouts but is now used to them.

“This has been my life for years now and I do this for a living and to feed my family,” says John, a satellite dish installer who learned the trade by watching DIY videos and helping more experienced installers.

John receives a lot of work from clients in Zimbabwe who need their dishes to be refocused, often just before a big football match or the screening of a popular South African soap opera. However, a big and growing part of his business comes from installing satellite dishes to give clients access to Openview, a South African service that allows viewers to watch a wide range of channels for a one-off initial payment for US$40.

For these jobs, John puts up the satellite dish and then calls a contact in South Africa to activate the decoder. He charges clients US$10 to US$15 for the service and completes about five such jobs each week. Since Openview launched in 2013, John has helped countless happy customers access their twenty-plus channels, spanning news and sport to movies and cartoons.

The only problem is that what John, who asked to remain anonymous, is doing is illegal.

The airwaves in Zimbabwe have long been a restricted environment. For about four decades, the state-owned Zimbabwe Broadcasting Corporation (ZBC) was the only free-to-air television channel and was widely seen as a mouthpiece of the ruling ZANU-PF party. In 2020, the Broadcasting Authority of Zimbabwe (BAZ) issued licenses to six new television stations, ending ZBC’s monopoly. However, critics raised concerns about the lack of diversity of these outlets, pointing out that they were all linked to the governing party or already had other media licenses.

“The owners of these stations are political and economic allies of the ruling party which means there is nothing new in terms of content diversity and democratisation of the airwaves,” says Admire Mare, a professor in media at the University of Johannesburg. “We expect more of the same content pushed by ZBC over the last 42 years.”

For viewers fed up with this free roster of channels, there are some paid services available. The likes of Multichoice’s DStv offerings, however, are expensive for most, spanning from a “Premium” package of US$75 per month to the cheapest “Lite” package of US$8 per month. Some competitors, such as Kwese TV, have exited the Zimbabwean market recently due to economic difficulties.

This has left Zimbabweans with relatively few options and made Openview’s offering of a single US$40 fee for unlimited access all the more appealing – despite its illegality.

“I used to subscribe to DStv for years, mainly to watch live football matches, but the cost has skyrocketed, leaving me with no choice but to use Openview as an alternative,” says Edwin, one of John’s customers. “I last watched ZBC TV a long time ago because it has poor content and too much propaganda.”

A diversity of voices

Airwaves piracy can thus be seen as a response to Zimbabwe’s limited media environment. However, according to Professor Mare, it may also be a contributing factor in perpetuating low quality broadcasting in the country.

“[Piracy] is a way of circumventing the poor programming and propaganda that is spewed by local stations – it’s a way of coping with the restricted media space – [but] it means, in the end, local stations and advertisers are not able to monetise viewership,” he says. “It affects media sustainability in Zimbabwe.”

He believes that the government needs to urgently amend broadcasting regulations to address changes since the advent of digital technologies. This could allow local outlets to compete as well as open up Zimbabwe’s media space.

“The law must also be aligned with the 2013 constitution in terms of access to information, media freedom and broadcasting in diverse national languages,” he adds.

Journalism researcher Alexander Rusero echoes these calls but argues that a limited number of channels and low investment in the television industry is not just a Zimbabwean problem.

“Even if you look at South Africa, there are not many TV players, so to speak, despite the multiplicity,” he says. “Botswana also, despite having been independent ahead of us, still has Botswana Television (BTV).”

For Rusero, the real issue is not the number of channels available but the diversity of voices and perspectives.

“You can still have one TV channel with diversified voices, but in Zimbabwe, you have limited players, limited voices – that’s where the contentious issue is,” he says. “When you have limited players, so to speak, the voice will be one. If the president is speaking, he will be speaking across all the stations. And if the opposition speaks, you will not hear him unless you have some privilege to access social media.”

About the writer: Derick Matsengarwodzi is a content creator with experience in the media, public relations, advertising and marketing industries, including NGOs. He contributes to regional and international publications.–African Arguments.