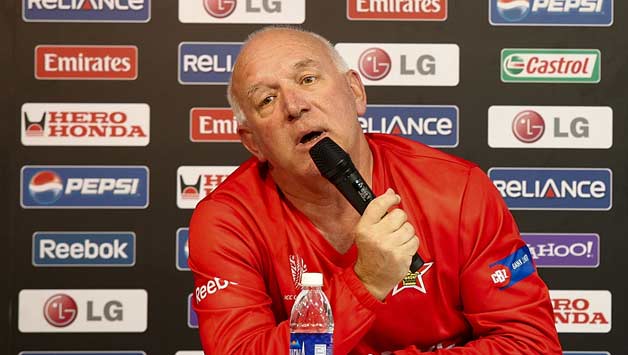 WHEN a Facebook account last week posted a photo of somebody resembling former Zimbabwe cricket coach Alan Butcher (pictured), fresh from landing at the airport in Harare, old friends in the country promptly inquired: “Is that you, Butch?”

It was indeed him, but you can understand why someone would think it could have been a striking lookalike.

Butcher’s return to Zimbabwe, for the first time in nearly a decade, has been a low-key affair. A rather unglamorous occasion for somebody who had such a lasting impact on the African nation’s cricket team, and even wrote a whole book about his memorable times in Zimbabwe.

68-year-old Butcher comes back to Zimbabwe as assistant coach of Jersey, the smallest nation in an eight-team tournament in Bulawayo, which has settled the last two teams to qualify for the T20 World Cup in Australia in October.

Island nation Jersey is a self-governing British Crown Dependency, near the coast of north-west France, with a population of around 100 000.

Cricket, due to the English connection, is a favourite pastime of the Jersey folk, but the national side is still an international minnow in the sport.

But the rapid growth of cricket across the globe, beyond the non-traditional cricketing playing regions of the world, will make teams like Jersey a force to reckon with in the not-so-distant future.

Jersey will continue to improve, certainly by working with knowledgeable coaches like Butcher, who joined the side before the tournament in Zimbabwe on a short-term arrangement.

“I’m assistant coach and was recommended by Peter Such, the ex-England, Essex and Notts off-spinner,” Butcher told The NewsHawks here.

“He had been working with the team, but was unavailable for this tour and he put my name forward.”

Jersey is Butcher’s first major gig in nine years, and it comes in a country where he last coached at the highest level of the game.

“I have not had a job in professional cricket since I left Zim, so I’ve pretty much been retired!” Butcher, who is assisting Jersey head coach Neil MacRae, said.

“I coach my local club Coggeshall Town CC and do a bit of speaking and commentating. But I’ve been enjoying having the time to do more things outside of cricket.”

Englishman Butcher’s first assignment after his appointment as Zimbabwe’s coach was at the T20 World Cup in the West Indies in 2010.

There will not be another World Cup for him because Jersey did not qualify, but Butcher has been thoroughly impressed by the brand of cricket played in Bulawayo by such teams as Jersey.

“There has been some very good cricket as you have seen,” commented Butcher. “Jersey gave Zimbabwe a scare yesterday (on Tuesday) and USA have some quality. It’s great for the world game to be spread wider and that improvement in quality is being seen.”

Butcher – who had a short playing career with England – guided Zimbabwe to a triumphant return to Test cricket, against touring Bangladesh in 2011, with the host also winning the ODI contest in that series.

He was fairly successful with the Zimbabwe team, a side he had inherited at rock bottom, but the former Surrey coach lasted just his initial three-year contract in his first international job.

Away from the game in Zimbabwe, Butcher was quite a popular figure around town, establishing a diversified circle of friends in a country he has always had great affinity for, having played club cricket in the African country in the 1970s.

“It’s my first time back in Zim since I left in April 2013,” Butcher said. “I’ve been overwhelmed by the love and warmth I’ve received. It’s been great catching up with old friends and I’m loving every minute of it. Zimbabwe has a special place in my heart.”

So unforgettable were Butcher’s experiences in Zimbabwe that it motivated him to write a book, a fascinating story titled “The Good Murungu – A Cricket Tale of the Unexpected.”

The title is inspired by a domestic worker at Butcher’s Harare home, who called him a “good murungu (good white man)” in gratitude for being bought a new bed.

“The Good Murungu was short-listed for two cricket book awards and was pretty well received in the UK,” said Butcher.

“I’ve been pleased by the number of people who claim to have read and enjoyed it in Zimbabwe!”

In a short tournament with very little free time in-between games, Butcher has tried to meet as many familiar people as he possibly can.

He remembered to make a friendly phone call to his ex-gardener in Harare. And with the tournament being in Bulawayo, Butcher could not miss the opportunity to touch base with one of the City of Kings’ favourite sons, Chris Mpofu.

The ex-pace bowler was a senior player in Butcher’s Zimbabwe team, and outside the game the two became bosom buddies. Fittingly, a picture of them together graces the cover of Butcher’s book.

“I saw Bobby (Mpofu’s middle name and nickname) at Queens yesterday and it was great to catch up,” said Butcher.

“I hope we’ll have a longer time because it was very brief.”

Brief, but quality time is always guaranteed with Alan Butcher, a good friend to many around the world.

The comedy of errors that is Zimbabwe’s PSL