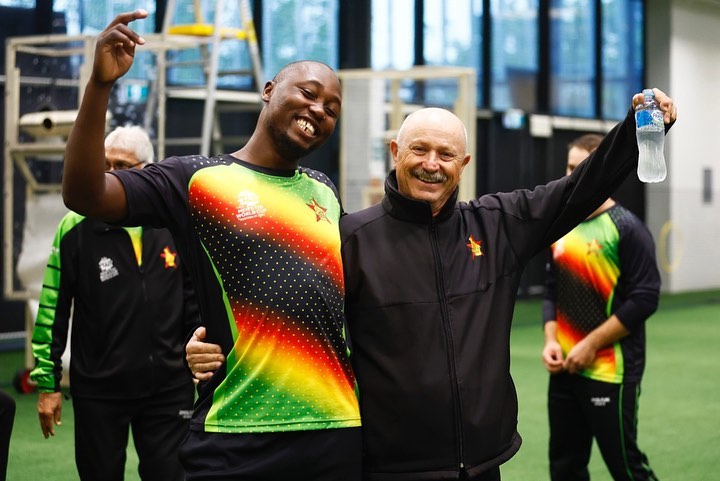 A FORMER top official of Zimbabwe Cricket (ZC), Nick Chouhan, is backing the Chevrons to continue their resurgence and leave a mark at the forthcoming T20 World Cup in Australia.

Zimbabwe open their campaign against Ireland in Hobart on Monday in Group B of the first round, on the African side’s return to the big stage after missing out on the last two World Cups of both white-ball formats.

“This team has good balance, it has good openers, a strong middle order, as well as good spinners and seamers,” Chouhan, a former ZC development director, told The NewsHawks.

“Look at the warm-up game against Sri Lanka (on Tuesday); 11 people bowled, so there is good back-up. But we have to be careful of the bouncy wickets in Australia, even the sub-continent teams like India and others have to adjust to the bouncy and fast wickets.”

The Chevrons will also face Scotland and West Indies in the pool, with the top two sides progressing to the Super 12 stage. Eight of the countries in the 16-team tournament have automatically qualified for the Super 12 due to superior rankings, so have a bye in the first round.

Chouhan stressed the importance of Zimbabwe securing a Super 12 berth, adding on that the country should in the future improve its rankings to avoid the pressure of having to qualify from the preliminaries.

“Going all the way to the Super 12 will put Zimbabwe back on the map,” commented the veteran administrator. “We shouldn’t be struggling to qualify and all that. We are capable of being in the top 10 in all formats.”

A commonly held view, also shared by Chouhan, is that Zimbabwe should target Ireland and Scotland, and then play with freedom to possibly upset two-time T20 world champions West Indies.

“We have to win the games against Ireland and Scotland, winning against the West Indies will be a tall order, but a morale booster,” he said.

“But it can be done provided the key player perform. We have beaten Ireland before, we have beaten Scotland before. On their day, the Zimbabwe team can beat the West Indies provided everyone chips in. The key players are (Sikandar) Raza, Sean Williams, (Craig) Ervine the captain, (Regis) Chakabva with his experience. I hope he (Chakabva) doesn’t open, because he has done better in the middle. Ryan Burl is used as a finisher, he can clear the boundary, and Brad Evans is a good all-rounder to have. In the bowling unit, we have Blessing (Muzarabani), (Tendai) Chatara and even (Richard) Ngarava – all good bowlers. There is talent in that squad.”

Coach Dave Houghton’s philosophy of fearless and basic cricket has been a key component of the team’s revival since the former Zimbabwe batting kingpin and first Test captain took over the reins in June.

Chouhan believes the same approach will be crucial for the attainment of team goals in the World Cup.

“We have to play our game, don’t be complacent,” he said. “Take catches, field strongly, bowl line and length, and the batters must bat to their potential. If we play well, we will pull out a surprise here and there. Houghton has given them freedom: ‘I don’t care how you get out, but play without fear’”.

The hugely respected club cricket stalwart and ex-national administrator, who also had a spell as a sports broadcaster in the 1980s to early 90s, praised the impact of Houghton since his appointment in June for a second tenure in charge of Zimbabwe.

“The last five months have seen an upsurge, the players have built confidence, because they are now being mentored properly,” Chouhan said.

“Dave is a good cricketer himself, he leads by example. He scored a hundred in the country’s first Test match, against India (in 1992). He is a good motivator in making players believe in themselves. I played with Dave at Old Hararians and as an administrator I toured with him. He is a very good person to have in the team. He is very simple in his ways, but he has a very good eye for picking talent and making sure the right players are playing. His man management is very good. He knows how to talk to people and get the best out of them. He has coached overseas for years and he brings back home that experience.”

It has been a positive turnaround indeed for Zimbabwe from a tough last five years in which the game in the country went on a nightmare of a phase, which included an international suspension by the game’s global governing body, the ICC.

Things are starting to look up again, but there is some concern though, beyond the World Cup, over the future of the Zimbabwe team. The core group of the current team is aged between early to mid-30s, which might hint at retirement for some of the players over the next few seasons.

Chouhan, however, allayed fears of a talent drain, remarking that the younger players are gradually gaining the experience to eventually fill the void smoothly.

“The older players will nurture the youngsters, hopefully, and leave a legacy to say if they can do it, so can we,” said Chouhan.

“Remember, there are two good players who were not selected for this World Cup, (Innocent) Kaia and (Tadiwanashe) Marumani. There will be positions for them in future. We do have talent and we need to nurture it. In cricket, bear in mind, one can play until the age of 40. Look at (England fast bowler) Jimmy Anderson, who is still bowling well at 38, 39 (Anderson turned 40 in July). Most players know when they have had enough. Their bodies will tell them.”

After Monday’s clash with the Irish, Zimbabwe will take on the West Indies on Wednesday and then Scotland on Friday.

No decision on coach yet: ZRU