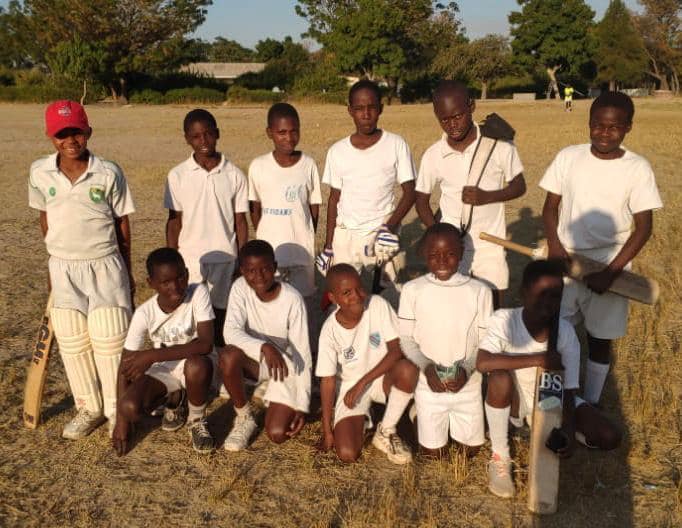 FROM where Harare comes to an end on the south of Zimbabwe’s capital city – to the town of Chitungwiza – is a recently upgraded highway sandwiched between colourless landscapes.

The arid plains are dominated by light brown soil and dry grassland that turns pale yellow from the heat of the Zimbabwean summer heat.

Some of Zimbabwe’s oldest rural areas, which depend on subsistence farming to feed families, are nestled a distance further down the highway.

The drab countryside scenery on the road appears to take you to the peripheries of the world, not exactly what you expect of a route to the hometown of four young gifted cricket players forming part of a 15-man international team that has recently achieved the historic feat of their country’s first away win over global giants Australia.

This new breeding ground for Zimbabwe cricketers is at the 25km peg along the road, mostly lying on the right side. It is a cluster of sprawling townships, collectively known as Chitungwiza, which despite heavy economic reliance on the nearby capital city, has its own town council and mayor.

Geographically and administratively, it is like what Ekurhuleni is to Johannesburg or what Centurion used to be to Pretoria.

The dull sights that lead to Chitungwiza can be completely misleading, because once you venture deep inside, the strong urban culture and vibe is too  conspicuous to ignore.

It is a crowded municipality of contrasts, where poverty meets hard work, as well as big dreams and aspirations. Chitungwiza is probably not unique. A lot of people around the world will know of such a special place which, despite its myriad challenges, produces some of the country’s finest citizens, quite a number of them being among the best at what they do.

Sport, it goes without saying, forms a big part of Chitungwiza’s social fabric, and football still remains the favourite pastime in this settlement of about 340 000 people.

Which, come to think of it, gives you some perspective of the in-roads that cricket has made over there: Imagine the amount of effort that will go into it if challenged to select four players from Chitungwiza, all from one club, in the same Zimbabwe team in any sport.

Batsmen Wessly Madhevere, Tadiwanashe Marumani, Tony Munyonga and Clive Madande are all local Chitungwiza boys included in Zimbabwe’s squad for the recent ODI tour of Australia. There could have been a fifth, but Milton Shumba had been injured before the trip Down Under.

Zimbabwe lost the series 2-1 in Townsville, but made headlines across the world with a famous three-wicket win over a full-strength Australia side in the last match, the first time the African side has defeated the global cricketing giants on their own turf.

It is only fair to acknowledge that the young prodigies from Chitungwiza’s conveyor belt have not had an easy ride into the national reckoning.

Merit and ability have been a huge factor, as recent performances show.

Madhevere and Marumani caught the eye after building on their batting credentials in the Australia series – while Munyonga played a significant cameo role against Bangladesh in August, alongside the heroic Sikandar Raza, in a series-clinching ODI win.

Chitungwiza has been quietly creating its own identity as a Zimbabwean cricket powerhouse, through the tireless work and personal sacrifice of a great deal of locals.

Prior, Highfield, the popular township in Harare, had been the single biggest hotbed of black cricket talent in Zimbabwe.

But a new dawn is upon us, if you believe Andrew Mareya, the industrious and resourceful manager of Gladiators Cricket Club of Chitungwiza.

Gladiators is the high-riding team that has produced all four players that were on Zimbabwe’s tour of Australia, a gritty little high-density club with surplus talent to be crowned champions of the country’s National Premier League (NPL) this season, grinding out results without players on national duty for most of the term.

“Chitungwiza is the new home of cricket in the country,” a proud Mareya boldly remarks to The NewsHawks this week.

“As you can clearly see, the balance of power is shifting from Highfield. Something special is happening across the bridge.”

Manyame River cuts across the highway, within sight of Chitungwiza, location of the bridge that Mareya refers to.  The bridge is like the boundary, a sign that you have since left Harare and almost into “Chi-town”, as the residents fondly call their town. But then the river flows directly southwest of Harare into Lake Chivero, the main water supply for the capital city.

Of course, the river border is only symbolic and geographical, it has no restriction on the daily busy movement that takes place between Harare and Chitungwiza. Similarly, there has been no sporting boundary to suppress the new wave of cricket talent from across the Manyame channel.

Football has ruled the roost in Chitungwiza for many decades, although there has been the odd half-decent cricketer from the town over the years.

A few personal favourites come to mind first, including Amos Maungwa and I always wonder nostalgically how this little fellow – for a man of his size – was able to unsettle even some of the country’s best international batsmen with his pace, bounce and reverse swing.

Then Nyasha Chari, a promising and naturally-gifted all-rounder who played in the same Prince Edward School team with future internationals Mark Vermeulen and David Mutendera, and possessed leadership traits that landed him the captaincy of a very good Old Hararians club side in later years.

Having national team players, though, is a new phenomenon for Chitungwiza. All this from just three local clubs – Gladiators, Uprising and Royal.

Primary schools are the nucleus of Chitungwiza’s growing reputation as an important centre for cricket development in Zimbabwe. An encouraging number of junior schools play competitively, enthusiastically guided by dedicated grassroots coaches who are supported by local clubs with the backing of kind benefactors from abroad.

Only one of these coaches, Malcom Chikuhwa, is on the payroll of Zimbabwe Cricket (ZC), overseeing the entire development structure of Chitungwiza.

St Aidan’s Primary School is the focal point of all activity and it is not surprising that former pupil Madhevere, the brightest young prospect in Zimbabwe’s national team right now, was first taught the game there.

“Every kid in the streets and schools in Chitungwiza now want to be the next Wessly, the next Tony and the next Milton,” says the energetic Royal Cricket Club player-coach Cromen Zinyama.

“Chi-town has moved miles in terms of cricket development.”

They however face some great difficulties in the journey, including facilities as well as lack of continuity for the larger number of kids not fortunate enough to progress to cricket-playing senior schools outside the town.

“The challenge we are having at the moment in Chitungwiza is that there is no cricket going on in high schools since the concrete pitch was dug at Seke 1 High, which was the main feeder for the three Chitungwiza clubs,” adds Zinyama.

“We are sharing facilities with Gladiators at St Aidan’s Primary School and we have no fixed home ground as there are no proper cricket facilities in Chi-town. So sometimes we use Prince Edward School, Old Hararians or Sunrise Sports Club.”

For now it is okay because these are wonderful cricket venues in Harare, but just visualise for a minute how it would be like for Chitungwiza folk to be watching their local heroes strutting their stuff at a decent ground in their own hometown, and marching to the Premier League title as Gladiators did this season.

In the meanwhile, in Chitungwiza they are focusing on what they can control.

From primary schools in Chitungwiza, the best talent and luckiest receive bursaries, to smoothen the rough edges of their game at a critical stage of their development. Rockingham Colliery Cricket Club in the United Kingdom, who have a relationship with Gladiators, provide scholarships for St Aiden’s cream to attend Prince Edward or Churchill Boys High in Harare.

St Charles College, a South African private boys’ school in Pietermaritzburg, have also been incredibly charmed by the Chitungwiza story and they too have designed a scholarship programme to assist.

Madhevere is a past beneficiary, captaining the school in his final year in 2019 on top of being named St Charles’ player-of-the-season.

“Expect more gems to come out of this,” asserts Zinyama. “The current St Charles beneficiaries are Newman Nyamhuri and Brandon Sunguro, who we also rate very highly.”

They are definitely doing something right in Chitungwiza, and the news has reached as far as the leafier suburbs of nearby Harare.

Their coach and teammate at Royal, Zinyama, was once a capable opening bowler for Churchill School and at the age of 33, he is now focused on grooming players who will have greater career opportunities than him.

And he makes a vow on behalf of his hometown.

“Chitungwiza will produce great players who are going to win many big games for our country,” he pauses, searching for the right emphasis. “…many games, trust me.”

You cannot be left in doubt when you see the purpose, passion and vision.

Why local football attendances are on the decline

President’s Cup urgently needs a Rest-of-the-World win, or does that matter?