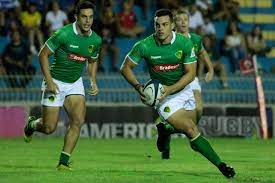 ZIMBABWE will on Sunday venture into completely new territory, with a historic first international rugby match against unheralded Brazil, who have a giant South African-born loose-forward in their ranks.

The match, in Stellenbosch near Cape Town, will be a return to these parts for 24-year-old Devon Muller, a former Natal youth star who will be making his Test debut in his country of birth, having lived in Brazil for the past five years and qualifies on ancestry.

Just like Zimbabwe, Brazil will be playing without their strongest squad in this World Rugby-sanctioned four match tournament which also involves Namibia and Kenya. A notable absentee for Os Tupis, as Brazil’s rugby team is nicknamed, is star flyhalf Josh Reeves.

Another of the South Americans’ naturalised players, Reeves hails from Christchurch, New Zealand, and has lived in Sâo Paulo for a sustained period before earning eligibility for Brazil.

In November 2019, Reeves played for Brazil against a touring Barbarians side that included Springbok legend Tendai “Beast” Mtawarira. So, rugby in Brazil might be only a growing sport, but it is a fast-growing one.

Although the Brazilians are hugely competitive in the Americas region in recent times, they have not yet qualified for the sport’s biggest stage, the World Cup. They are however very serious about their rugby and their national side is slowing getting international recognition.

Os Tupis are ranked 27 in the world, seven places above Zimbabwe, who have a much richer heritage in the sport and are two-time World Cup participants.

But the peculiarity of rankings stems from such factors as the quality of regional or continental opposition teams, and the amount of Test matches countries play per year. All the same, having considered all factors mentioned above, one cannot merely dismiss Brazil’s world ranking – ahead of countries better known for their rugby – as simply a result of a complex ranking system.

Zimbabwe’s coach, Brendan Dawson, knows this, and what to expect on Sunday.  “Brazil are ranked 27th in the world and we’re ranked 34th, so yeah.

It’s going to be a big contest,” Dawson said. “But the guys are confident, the guys are positive that they can go and put a correct performance and make it right, make sure they take the game to the Brazilians and beat them. We are confident in our structures, in our approach, so hopefully the outcome will be good.”

The winner of Sunday’s match at the Stellenbosch Academy of Sport will play in the final against the winner of the other tie between Namibia and Kenya. Zimbabwe warmed up against South African side Cheetahs last weekend.

Prop Lawrence Cleminson sustained a hamstring injury and has been replaced in the squad by fellow front-rower Bornwell Gwinji. Sables captain Hilton Mudariki is however confident of the experimental side. “Everyone is pushing for a position and trying to make the coach’s job tough in terms of selection,” said the scrumhalf.

“The camp has gone very well, you know, we’ve been hosted well here in Stellenbosch and the guys are looking to put on a very good performance this weekend against the Brazilians.

“Obviously the first time we will be playing them, but we are very excited and looking forward to the challenge ahead. We just want to continue to thank all our supporters back home. We miss you, we wish you were in the stands supporting us, but we know that you’re supporting us from far. We feel the love and continue supporting the Sables.”

Related Topics:BrazilZimbabwe Rugby
Up Next

This could be a double-edged sword for Zim football