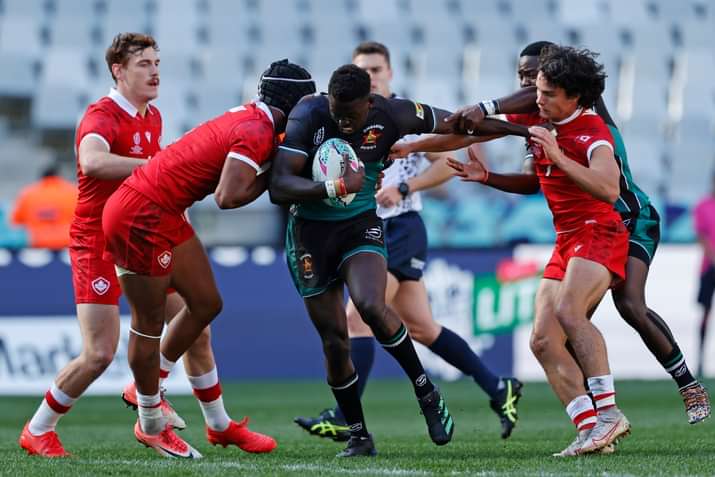 Zimbabwe playing in their tournament opener against Canada.

OUTRAGE has ensued within Zimbabwean rugby after a top official said the governing body was “quite happy” with the country’s second-from-bottom finish at the Rugby World Cup Sevens in Cape Town last weekend.

Zimbabwe lost three matches out of four in the tournament, only beating rugby lightweight Jamaica, the only team they finished above in the 24-team men’s competition of the 2022 World Cup.

Canada, Hong Kong and Korea all won against the Zimbabwean side, nicknamed Cheetahs.

Zimbabwe Rugby Union (ZRU) vice-president Losson Mtongwiza then remarked to a local daily that the federation was not at all disappointed with the outcome in the sport’s second major global event, because the country sent a young and rebuilding side to South Africa.

Tichafara Makwanya, a multiple-capped ex-Zimbabwe international in the premier format of the game, tweeted how “hurt” he was by ZRU’s reaction to the awful Cape Town performance.

“Read the article thinking it was one of the coaches, ndarwadziwa (I was hurt) to see it was Losson,” wrote Makwanya.

“He was part of the system when we had a good 7s side. He has no business commenting on technical bits of the game! Young underperforming players will grow to be older, more mature under-performers!”

Mtongwiza, though, leaped to his own defence, saying the composition of Zimbabwe’s 12-man squad – which was largely locally-based – justifies his modest expectations from the Cape Town tournament.

“Club rugby in Zimbabwe is run by volunteers and all the players are amateur,” Mtongwiza told The NewsHawks this week.

“They train when they want and play as when they choose. So can we expect those people to be ready when they go to national teams where a little bit of money is available? In the 80s and 90s clubs had a lot of competition and players had to go the extra mile to make a club side. When they got to the national team it was indeed a step up. Most people had jobs and this (rugby) was good pastime. So 23 in the world is not bad at all considering that preparations didn’t get financial support and there are a lot of individuals who sacrificed to get us that number in the world. You will also note that the team wasn’t thrashed by anyone, we were competitive in every game.”

Zimbabwe’s poor showing in Cape Town draws contrast with the performances of the other African teams in the World Cup.

Host South Africa finished seventh, hosting for the first time and once again falling short of a first World Cup title in the shortened form of the game as Fiji were crowned champions.

It is however the performances of Kenya and Uganda – who Zimbabwe should consider to be peers – that reflects how far the Cheetahs have fallen behind over the past decade or so.

Kenya finished 12th while Uganda was on number 17. The Ugandans even left Cape Town with a trophy, from the Bowls section of the World Cup, after beating Germany in the final of the tournament’s second play-off contest.

“You saw it for yourself, from April to now, September, Kenya has gone out to play in the Commonwealth Games. They’ve also played on the (World Rugby Sevens Series) circuit,” said Mtongwiza.

“You can count the tournaments, it’s a good six to eight tournaments that they have played. That gives you experience, it gives you experience to change players. So because of that, obviously Kenya has improved, look at their performance at the World Cup, and look at the number that they came, at the end of the day. We lost to Uganda in Uganda. Now, in Uganda they have a lot of government support and so does Kenya. Kenya do not do anything without government support. They were actually waiting for the elections to be finalised to hear from the government before setting the dates for the Safari Sevens (international Kenyan tournament), which is coming up in October. Through their state lottery, money is raised and availed to the team. So obviously they were waiting for that and their players have a salary and they have an allowance – to go to the gym, to train, and to play. Unfortunately it’s not the same for us. Things are tough, players only go out and train when they are pushed to do it. What you put in is what you get.”

Mtongwiza added that the union’s weak financial position and unavailability of experienced players presented an opportunity to use the World Cup as a launch pad to the future.

“This last November, this (Zimbabwe) team was handed over to the new coach Graham Kaulback, and since last November he has put together a team of locally-based players because trying to get players who are playing at professional or semi-professional levels out of the country has always been a difficult proposition because we don’t have the finances to be able to fly those players into the country. So it became necessary for the World Cup to be part of the rebuilding process. It was wise to invest in these (locally-based) players. Instead of bringing professional or semi-professional players and spending on them, it was better to invest in this project.”

Punished for calling himself ‘Beast’, but now tracing his hero’s footsteps