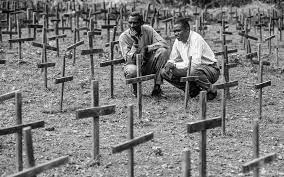 THE pioneering and legendary  Jamaican reggae lyrical genius Peter Tosh was classified as the Che Guevara and the Malcom X of reggae music, because of his rebellious, militant, radical, truth-telling and forthtelling musical style.

Through the barrel of the microphone, he  produced an immortal reggae classic titled “Down-pressor man”.  Accordingly, it is instructive and  relevant to reference some of the thought provoking, poetic and metaphorical lyrics of this song:

Where you gonna run to

All along that day

You gonna run to the sea

But the sea will be boiling

When you run to the sea

The sea will be boiling, All along that day

You gonna run to the rocks

The rocks will be melting

When you run to the rocks

The rocks will be melting All that day

You can run but you can’t hide,Telling you all along that day

You gonna run to the Lord

Beggin’ to hide you

You gonna run to Jah

Beggin’ to hide you

All, all along that day

You can’t bribe no one

Them no want no money

Therefore, these prophetic and immortal lyrics by Tosh have become very instructive and crucial in light of the discovery of the body of one of the  world`s most wanted fugitive genocidaires, Protais Mpiranya, at Granville cemetery just outside Harare in Zimbabwe. Thus, after 20 years of being a fugitive from international justice and accountability, due to his infamous and active role in participating in  the 1994 genocide against the Tutsi and moderate Hutu in Rwanda.

Protais Mpiranya: A case of elite collusion and betrayal of genocide victims

Therefore, this opinion will seek to explore and expose the dark web and the evil nexus  of  elite collusion within the Zimbabwe military and political establishment that facilitated Mpiranya`s fugitive outlaw existence from international justice. Additionally, I will  argue that despite the discovery of his body, he has been indicted on crime of genocide, war crimes and crimes against humanity.

Nonetheless, the Zimbabwe government through its commissions and omissions in providing refuge and hiding this fugitive in plain sight became an active accessory to international crimes and betrayed the  800 000 victims of the genocide and their families. Thus, this tragic intentional dereliction of international obligations by the Zanu PF governments has reinforced its image as a pariah government, that is part of the international criminal nexus.

Suffice it to say that, between the months of April 1994 to July 1994, the tiny East African nation state of Rwanda was engulfed in apocalyptic genocidal terror and repression. Thus, the 1994  genocide aganist the Tutsis and the moderate Hutus resulted in 800 000  extrajudicial murders and deaths.

The genocidal campaign was a state-sanctioned campaign that was driven by the extremist Hutu government officials in cahoots with the rank and file Hutu militias known as the Interahamwe. The raison d’etre of this genocidal campaign was to systematically exterminate  and eliminate the Tutsis, who were the minority tribe in Rwanda in order to create a mono-ethnic and mono-cultural ethnocentric Hutu Rwandan state.

One of the key protagonists of this state-sanctioned ethnocentricity and ethno-nationalist genocidal campaign to pulverise Tutsis into physical oblivion was Mpiranya. He effectively  became the butcher of Rwanda.

Mpiranya was commander of the presidential guard and, under his authority, he initiated the incendiary spark of the  genocidal campaign against the Tutsis and moderate Hutus.

Mpiranya kickstarted his genocidal campaign by murdering Rwandese moderate senior  leaders such as  Prime Minister Agathe Uwilingiyimana, the president of the Constitutional Court, the minister of Agriculture and the minister of Information. He also actively participated in the murders of 10 Belgian United Nations peacekeepers during that same period who provided close protection security to moderate Rwandese senior leaders such as Prime Minister Uwilingiyimana.

Therefore, in 2000 the International Criminal Tribunal for Rwanda (ICTR) indicted Mpiranya on eight counts of genocide, complicity in genocide, crimes against humanity and war crimes. Consequently, an international warrant of arrest was issued against Mpiranya and he subsequently became a fugitive from international law.

After Paul Kagame and his then rebel movement the Rwandan  Patriotic Front captured Kigali in August 1994, Mpiranya and other Hutu genocidaire extremists fled to Cameroon, only to resurface in the Democratic Republic of Congo in 1998. By then, Mpiranya had formed a rebel group, the FDLR, which fought alongside the Zimbabwean military as part of a coalition that was propping up the beleaguered regime of Laurent Desire Kabila against  Congolese rebels supported by both Rwanda and Uganda.

Consequently, the current President of Zimbabwe, Emmerson Mnangagwa and some of the securocrats who staged the November 2017 military coup that deposed Robert Mugabe, were implicated in the United Nations 2002 report on the plunder of mineral resources, particularly the  blood diamonds in the  DRC killing fields.

Thus, it also reported that Mpiranya, who was now using various aliases including Alain Hirwa or Commander Hirwa, managed to have his fair share of DRC conflict and blood diamond spoils.

Therefore through his military prowess in fighting alongside Zimbabwean army in repelling Ugandan and Rwandan-backed rebels, coupled with a war chest of his diamond proceeds, Mpiranya managed to establish an incestous nonetheless mutually beneficial relationship with the senior Zimbabwean military and political elites.

Accordingly, when the ICTR in 2002 issued an indictment against Mpiranya on numerous genocidal crimes and war crimes, the Zimbabwean securocrats and political figures facilitated his clandestine fugitive escape from the DRC to Zimbabwe in September 2002.

Prima facie there is substantial evidence that shows that senior zimbabwean military and political officials aided and abetted the surreptitious escape of Mpiranya to Zimbabwe. For instance, Mpiranya  flew out of the DRC to Harare aboard a Zimbabwean military plane together with other Hutu commanders. Moreover, Mpiranya was no longer known as Alain Hirwa but had acquired a fake  Ugandan passport and was going by the name James Kakule.

Therefore, it can be demonstrated that the Zimbabwean government enabled Mpiranya to hide in plain sight despite being indicted for grave and serious international crimes. For instance, he was allowed to set up a transport business in Zimbabwe and live like a normal civilian.

Thus he would conduct his business errands and run his personal life without fear or risks of ever being betrayed by his host country and handed over to the ICTR. Additionally, after entering Zimbabwe as James Kakule, however, when he died on 5 October 2006, he had another alias,  Sambao Ndume. Accordingly, the manner in which Protais Mpiranya would regularly assume new aliases points to an individual who had close elite support networks within the Zimbabwean government.

Needless to say that the commissions and omissions of the Zanu PF government in facilitating the fugitive existence of Mpiranya for the past 20 years amounted to the betrayal of the 800 000 victims and the survivors of Rwanda genocide and their families.

Therefore, the Zimbabwean government  became an accessory in the genocidal and war crimes committed by Mpiranya. For instance, in  the past 20 years the  Zanu PF leaders did not show the political will in assisting the UN, the ICTR, the IRMCT and the international community to provide justice and closure to the victims and families of Mpiranya’s genocidal crimes.

Thus, there was a systematic pattern of obstruction of justice by the Zimbabwean government designed to prevent and protect Mpiranya from facing justice. For instance, in  December 2012, the ICTR investigators informed the UN Security Council (UNSC), that Mpiranya had strong networks and connections in Zimbabwe, and that he must most likely be in Zimbabwe.

However, the Zimbabwean government still did not come to the aid of both the ICTR and the UNSC by providing the information and whereabouts of Mpiranya.

Furthermore, in 2012 the government of Rwandan President Kagame applied diplomatic pressure on the Zanu PF government to hand over Mpiranya. Nonetheless, the matter went only as far as just being discussed in Parliament without any further actions being pursued to find Mpiranya. That was another clear case of disingenuousness and lack of sincerity on the part of the Zanu PF government to fulfill its international obligations in fighting genocidal and war crimes.

However, in November 2017 after Robert Mugabe was deposed in a military coup the  IRMCT officials travelled to Zimbabwe on the renewed but misplaced hopes and belief that the Emmerson Mnangagwa government would provide the whereabouts of Mpiranya. The IRMCT officials had been motivated and influenced  to travel to Zimbabwe on the basis that the new administration might be more progressive and cooperative than the previous Mugabe administration.

This was largely due to the fact that when Mnangagwa assumed power in November 2017, he had portrayed himself as a transformative and progressive change agent. Nonetheless, the IRMCT came back empty handed.

Consequently, in 2020, Serge Brammetz, the chief prosecutor of IRMCT, informed the  UNSC that, despite substantive and solid evidence which located the genocidal fugitives in Zimbabwe. Nonetheless, some southern African governments have not been co-operative and forthcoming in flushing out these genocidaires.

Dr Martin Luther King Jr once rhetorically and prophetically said that, the arc of the moral universe is long but it bends towards justice. Therefore, through the unrelenting methodical and forensic investigation of Brammertz and his dedicated crack unit of UN investigators, they managed to gather and collate irrefutable and watertight evidence, which clearly shows that the genocidaire Mpiranya died and was buried in Zimbabwe.

Consequently, the Zanu PF government, having now been confronted with this new and convincing and incriminating evidence, then reluctantly allowed Brammertz and his team on 7 February 2022 to search for Mpiranya’s grave at Granville cemetery, where his remains were found and were subsequently confirmed through DNA analysis in April 2022.

Accordingly, despite Mpiranya being an international fugitive for 20 years both dead and alive, eventually the long arm of the law eventually caught up with him.

Therefore by February 2022 it was clear that the genocidaire Mpiranya could not hide anymore and neither could he bribe the Lord nor anyone.

Another important aspect to note why Mpiranya before his death on October 2006 could feel at home and secure in Zimbabwe, is because his hosts, the Zanu PF government were perpetrators of genocide in their own right and had genocidal skeletons in their cabinets .

That is, Zanu PF government presided over the Gukurahundi  genocide which, according to conservative estimates, resulted in  20 000 genocidal deaths of  people from Metabelaland and the Midlands provinces. This also explains why the Zanu PF government for the past 20 years was evasive and unwilling to volunteer information on the whereabouts of Mpiranya.

There are also other mutually inclusive developments, that explains why the Zanu PF government did not actively and fully support  the IRMCT  with furnishing them with the whereabouts of Mpiranya, especially between the years 2020 and 2021.

For instance,  on 5 January 2020, Zimbabwe was the only African country that voted against the United Nations General Assembly Resolution (UNGA)  condemning the genocidal persecution of Rohingya Muslims by the Myanmar regime.

Furthermore, on 21 May 2021, Zimbabwean government again voted against the  United Nations General Assembly Resolution that seeks to protect vulnerable populations against genocide, war crimes, ethnic cleansing and crimes against humanity.

The discovery of the body of the genocidaire fugitive Mpiranya, 20 years after he was indicted for serious and heinous crimes aganist humanity, war crimes and the crime of genocide clearly shows that he was not able to face justice, largely in part to the active role played by the senior military and political officials within the Zimbabwean government.

Crucially, the commissions and omissions of the Zanu PF government  between the years 2002 and 2022 was a travesty of international justice for the victims and survivors of the 1994 genocide in Rwanda.

Thus, the failure by the Zanu PF government to fully cooperate with both the ICTR and IRMCT in exposing and handing over Mpiranya amounted to a miscarriage of international justice. Accordingly, Zanu PF betrayed  the international community, as well as the Kagame government, the victims, families and survivors of the 1994 genocide.

LONG READ | ‘We’ll get him dead or alive’: Reid’s Mpiranya trail to Zim