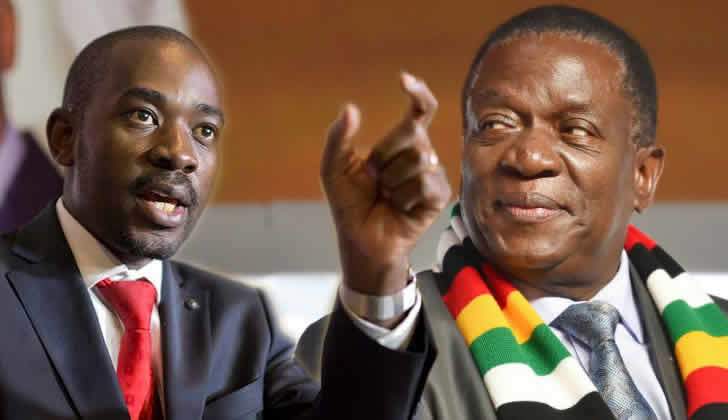 POLITICAL scientists say the main opposition MDC-Alliance led by Nelson Chamisa has no choice but to rebrand and change its name ahead of the 26 March by-elections and the crucial general elections next year.

They also warned that MDC-T leader Douglas Mwonzora, who this week announced his party would be contesting under the MDC-Alliance banner, risks sinking into political oblivion after joining hands with Zanu PF and President Emmerson Mnangagwa to dismantle the opposition.

Mwonzora also moved to stop other opposition parties from using the MDC name. In a letter to the Zimbabwe Electoral Commission (Zec) early this week, Mwonzora declared himself leader of the MDC-Alliance.

Mwonzora told Zec that only he and three other officials of his MDC-T party could confirm candidates “on behalf of the MDC, any of its derivatives and the MDC-Alliance” ahead of the by-elections.

The move appears aimed at upending Zimbabwe’s main opposition party, the MDC-Alliance, which is seeking to regain seats it lost when Mwonzora recalled its elected officials, ironically accusing them of joining a rival party — the MDC-Alliance.

Candidates for the various political parties contesting in 28 parliamentary seats and 105 council seats will be confirmed during the sitting of the nomination court on 26 January.

University of Zimbabwe political scientist Professor Eldred Masunungure says Chamisa and the MDC-Alliance have one option: to rebrand or rename the party to avoid confusing the electorate.

He said the legal route was a non-starter, given that the courts are captured. Masunungure described Mwonzora as a chief bull in the opposition that wants everything to himself just to spite others.

“If Chamisa wants to appear inconsistent he would take the legal route where he knows that the judiciary has been captured as what happened in the past,” Masunungure said.

“But if he wants to be consistent that the judiciary has been captured apparently by the state and Zanu PF, then he needs to rebrand, rename or re-label the party because the name MDC has become so toxic and will cause confusion.

“That confusion is what Mwonzora wants to perpetuate so that in the end the biggest loser will be Chamisa. As I see it, Mwonzora has nothing to lose,” Masunungure said.

He continued: “The renaming of the party has to be done not in future, but now as a matter of urgency. Although it is a hard decision, Chamisa has to make that decision. He has the numbers, the charisma is there and the leadership. For as long as the name MDC still exists, there will be confusion among voters. Yes, there is an emotional attachment to the name MDC, but also there has to be a rational response. By the way, what’s in a name? Mwonzora’s party cannot be known by every other name as if he a chief bull in the opposition,” he said.

Political analyst Dr Ibbo Mandaza said opposition forces were bigger than the name MDC, before pointing out that the by-election will end Mwonzora’s political career in an instant. “It’s both insane and obscene, to say the least.

It is gutter politics, desperate politics and it’s the end of his political career. He has buried himself in ignominy. I really think it’s about voters; Zimbabweans are smart, they know who to vote for.

“As for Chamisa, it will be less voting for him than against. What I mean is voting against can take two folds — you can vote for somebody else then Mwonzora; to quote from Dr (Simon) Muzenda, you can vote for a donkey than Mwonzora.

“Opposition forces are bigger than the name MDC and the history of voting in Africa shows that it is a vote against the incumbent.

“In 2008, I said this to Morgan Tsvangirai that (Robert) Mugabe lost by a landslide and he said ‘No, I won by a landslide’. So the history of voting is usually against the incumbent than a vote for the newcomer,” Mandaza said.

“This time again it will be against the person who the people see as a sellout and this is what is going to happen to Mwonzora and it is a matter of weeks before we see this. Mwonzora is going to be history and it is doubtful that the military will assist him this time.”

Related Topics:MDC-AllianceNelson Chamisa
Up Next