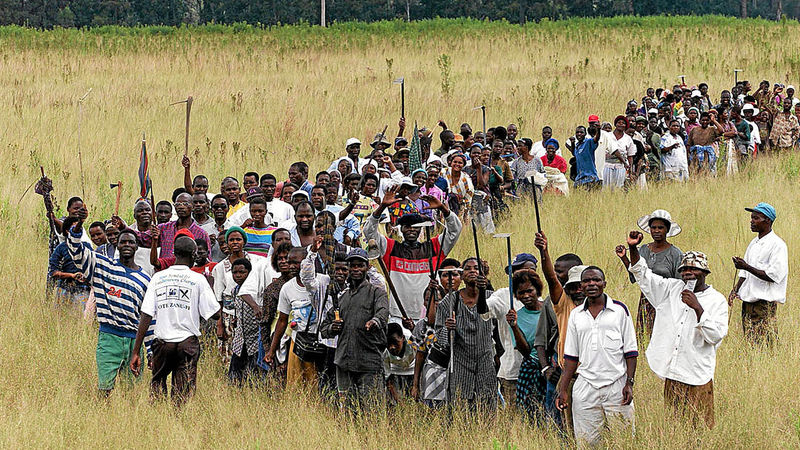 THE ongoing seizures of land by government from black indigenous farmers is increasingly becoming a crisis which speaks to ideological bankruptcy and bad governance by President Emmerson Mnangagwa’s government, as well as policy inconsistency and a breakdown of the rule of law.

A number of local black farmers have had their farms grabbed by the government out of sheer greed and not the need for important state development projects or production. Most of such farms are taken for political reasons or personal vendettas.

This was done in violation of the constitution and the law.  The seizures and abuse of power by those behind such dastardly actions have reduced the land reform programme to a partisan political enterprise, mainly furthering the interests of the greedy elites and their cronies, not Zimbabweans collectively.

The underlying problem is lawlessness in Zimbabwe, which is now entrenched. This has helped destroy the country, making it an object of ridicule by neighbours and the international community.

Yet Zimbabwe’s natural resources and human capital were once the envy of Africa; and they still could be. But no one will seriously invest in a county where the rule of law is trampled on and property rights are violated with impunity.

Until investors are confident in the legal environment and rule of law, they will not come. It is simply basic economics.  Capital, as they say, is timid. Foreign investors, not to mention local ones, want to be assured that the rule of law will be observed and adhered to, and that their investments will be safe before coming.

The vicious onslaught on democracy and the rule of law in Zimbabwe cannot be underestimated. Legality and constitutionality have been systematically subverted and undermined. This has left the country a lawless society in many respects.

Meanwhile, the forces of darkness, violence, and disorder have been unleashed, and allowed to prevail particularly, but certainly not exclusively, on the fast-track land reform programme.

More than 20 years since land invasions and seizures began, black people continue to have their farms grabbed. The land reform programme was justified in principle to address historical injustices and unfair land distribution and ownership patterns, but the chaos and violence, which led to the destruction of the economy, were needless.

The seizure of land from black farmers has nothing to do with the professed continuation of the revolution to empower landless majority, but politics, greed and primitive accumulation.

The trouble is that law enforcement agencies have either actively collaborated in law[1]less activities, or simply failed to perform their duties.  In Rhodesia, especially under the Ian Smith government, the rule of law was often not observed. The declaration of rights, in a series of constitutional enactments, was not justiciable.

Fundamental human rights were violated with impunity.  Due to the racist system of inequality, similar to apartheid, black people were denied their rights and ruthlessly oppressed.

But the irony is that after Independence in 1980, former liberators borrowed their colonial predecessors’ instruments of repression and coercion, and unleashed them on the black population.

For the past 42 years, Zimbabweans have been living in an authoritarian environment amid social and economic decay.

One of the consistent features of national failure has been lack of the rule of law. Although there is a wide variety of jurisprudential thought on the complex concept of the rule of law, it is generally accepted that a society in which the rule of law prevails enjoys a climate of legality, constitutionality and stability.

The rule of law is the antithesis of the wielding of wide, arbitrary and discretionary powers by the executive which often breeds abuse of power or office, corruption and impunity.

The fundamental basis for a constitution[1]al democracy and progress is the rule of law. Without that, a nation sinks into a chaotic society where individual liberties and property rights are violated with impunity.

Is another politics possible?

Politics is praxis: The organic activism of Madzibaba Veshanduko