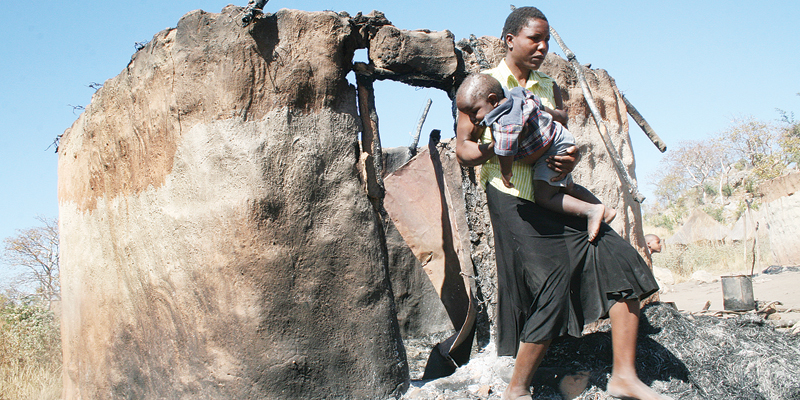 ZIMBABWE’S 2023 general elections are now around the corner and political parties are getting ready to intensify campaigns on the ground and online.

These are all men and with Constitutional Amendment Number Two having removed the running mate clause, it is clear the presidential election will be an all-man affair.

While the top is settled, internal processes of candidate selection for the legislature and local authorities in all these parties are yet to start.

The primary election processes take different forms, from voting to selection through consensus.

Among many other problems, these processes often expose women seeking public office within these political parties to the scourge of Violence Against Women in Elections (Vawe) either through sexual harassment or violence, physical and psychological attacks.

This article will specifically look at how sexual abuse limits women’s participation in politics by creating a toxic environment.

Vawe is a form of violence against women intended to impact the realisation of their political rights in an electoral context. This includes women’s participation as candidates, voters, activists, party supporters, observers, election workers, or public officials.

According to Mona Lena Krook and Juliana Restrepo, activists throughout Latin America contributed to define the concept of “political violence and political harassment against women” (violencia política y acoso politico hacia las mujeres), working inductively from their experiences and observations.

The concept first appeared in 2000 in Bolivia, “where a long grassroots campaign culminated in legal reform in 2012.” The Bolivian case was key to later developments, in three respects: “giving a name to this phenomenon, highlighting psychological alongside physical forms of abuse, and developing legislation to criminalise these behaviours.”

The Expert Group Meeting held in March 2018 by UN Women, the Office of the High Commissioner on Human Rights and the Special Rapporteur on violence against women, its causes and consequences, showed that consensus is starting to emerge in this area.

The Expert Group Meeting’s report and recommendations provide an overview of the prevailing situation regarding the issue.

It addresses causes and consequences of Violence Against Women in Politics (VAWP); international, regional and national frameworks; programmatic aspects in the prevention and mitigation of the problem; and measurement and monitoring of this phenomenon.

Some common understandings in the study of VAWP were summarised in the words of Krook: “ [VAWP] targets women because of their gender; its very form can be gendered, as exemplified by sexist threats and sexual violence; and its impact is to discourage women from being or becoming politically active.”

VAWP and Vawe are underreported phenomena since “victims may be afraid to speak publicly and may face additional disincentives if they report incidents, e.g. political backlash, defamation, family impacts, marginalisation within their own parties, showing weakness, receiving criticism that they are not up to the job, or the humiliation and frustration of not being taken seriously by the police.”

A central part of VAWP (and Vawe) is victim-blaming, “as men and women attempt to reinstate a challenged hierarchy of power and governance.”

Politics across the world and more so in Zimbabwe is largely a men’s affair and is difficult to enter for women and one of the many barriers to entry for women is sexual violence.

According to the UN, sexual violence against  women comprises a host of unwanted behaviours targeting a person’s sexuality and sexual characteristics, ranging from non-consensual physical contact to unwelcome verbal conduct of a sexual nature.

These acts of violence can either be online, offline or both. Whether involving a single incident or a pattern of behaviour, sexual violence violates human dignity, communicating a message of domination and disrespect.

Recent interventions around the world, especially in the wake of the #MeToo movement, seek to deepen emerging understandings that sexual violence is pervasive but unacceptable in the political realm by working to raise awareness, pursue sanctions, and devise preventative measures to expose and combat sexual violence in its various forms.

In Zimbabwe, women who participate in politics have had to deal with labels such as “prostitutes”, “home wreckers”, “loose”, among other degrading descriptions which seek to dehumanise and disempower them.

Zimbabwe’s leading political parties are dominated by men with women sidelined to women’s wings/assemblies/leagues where little decisions of significance are made.

Internal affairs of political parties in Zimbabwe are largely unregulated by law and any grievances are supposed to be resolved internally.

Most of the major parties have vague constitutions and internal documents, and none of them have a code of conduct which proscribes sexual violence. In addition, where disciplinary committees exist, they are dominated by men, yet they are often the ones responsible for sexual violence and cannot prosecute themselves.

Oftentimes, women who report cases of sexual violence are further victimised by being dismissed as “bitter losers” or having been in a relationship with the abuser and simply seeking sympathy.

This double victimisation silences other victims and emboldens perpetrators to attack more women as they are assured of impunity. Resultantly, women, and especially young women, have been victims of sexual harrowing in major

political parties with some instances being sexual exploitation in a quid pro quo situation where a man in power demands sexual favours in exchange for signing such documents as nomination papers.

Sexual violence is therefore part of main challenges resulting in under-representation of women in elected and appointed positions in Zimbabwe.

For example, in the 2018 elections only 26 women were directly elected into Parliament, down from 29 in the 2013 elections.

In local authorities, only 15% out of the 1 958 wards were occupied by women, this is far short of the envisaged 50-50 representation in terms of section 17 of the constitution of Zimbabwe.

While the quota system of 60 parliamentary seats and the recent 30% of all local authority wards are welcome interventions, they do not guarantee that the internal selection processes in parties are fair and women are not sexually harassed.

Research by various women’s organisations and rights groups, like Women’s Coalition of Zimbabwe, Women Academy for Leadership and Political Excellence (WALPE, 2019), UN Women (2020) and Open Democracy (2022), shows that women are hesitant to enter mainstream politics for fear of sexual violence.

Even within political party elections, women face sexual violence and sextortion for them to be elected to internal positions. The effect has been fewer women elected to top hierarchies of major political parties, while families have also limited their participation citing the toxic nature of the political landscape in the country.

Steps to curb the scourge

Having noted above that sexual violence is a serious problem in politics, the article proposes the five steps which can be taken by various actors to curb this scourge: Sexual violence legislation

The first key step is for the legislature to pass a comprehensive law which covers various acts that constitute sexual violence. This will provide a firm legal foundation that gives recourse for women whose rights have been violated by sex predators in politics and will act as a deterrent to would-be offenders. Perpetrators must be unapologetically punished for their offences.

Deliberate efforts must be made to raise awareness on the codes of conduct.

Sexual violence affects the political environment for women to ultimately participate in elections while undermining their fundamental rights. Therefore, Zec and the Zimbabwe Gender Commission must set up a joint mechanism to monitor and act against sexual violence in political parties.

The commissions must also provide for a referral mechanism so that victims can report their cases and get help. As a starting point they can undertake a baseline survey on sexual violence in political parties to establish the facts, patterns, forms and gaps.

The culture of sexual violence in politics has largely been normalised in the country in part due to ignorance, stereotypes and cultural practices. To challenge and change this, there is need for civil society and the media to deliberately raise public awareness on what constitute sexual violence and how as politically members and general citizens they can help stop the scourge. It is also important for civil society to target elected political party officials and capacitate them to be aware of their responsibility in providing spaces safe from sexual violence within their parties at all levels.

Sexual violence in politics is occurring in an environment where survivors have felt powerless to do anything about their situation.

Victims have been reluctant to come forward with their cases for fear of retaliation, gender biases, stereotyping and labeling and other adverse consequences.

Civil society, government agencies and political parties should enable an empowering environment for survivors to tell their story, be rehabilitated and be helped to continue with their lives after experiencing the gruesome ordeal of sexual violence.

In conclusion, sexual violence remains a scourge which is adversely affecting women’s participation in politics, delaying gender equality on elected positions and reversing the gains made in women’s empowerment.

The direct victims are disproportionately women, but the whole of society ultimately suffers because of this vice. As the nation goes towards 2023 general election, it is an opportunity to reflect on this serious challenge and provide working solutions to make party candidates selection and other processes sexual violence free.

About the writer: Memory Pamela Kadau is a feminist and women’s rights defender. She writes here in her capacity and can be contacted on: [email protected], she tweets @memorykadau

Brutal reality: No plan at all

The constitution, gender mainstreaming and feminists