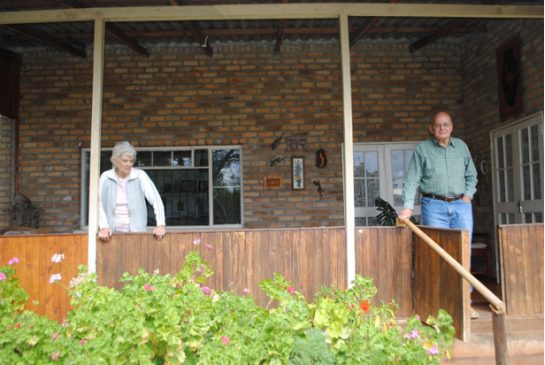 Piet de Klerk and his wife Mienkie at home in Mutare in 2010.

TRIBUTES have been paid following the death last week of Piet de Klerk Snr, who captained Zimbabwe in rugby and played in the famous win over the All Blacks in Bulawayo 75 years ago.

De Klerk, who passed on in Mutare, provincial capital of his beloved Manicaland, was in his early 90s.

He was best known in post-independence Zimbabwe as a white farmer who lost one of the most viable commercial farms in the country, a massive agricultural business known as Kondozi in Odzi, 32-km west of Mutare, Zimbabwe’s third largest city.

In his young days he was a top-class rugby player, featuring in Rhodesia’s 10-8 win over New Zealand in 1947, a result recorded as one of the biggest upsets in the history of international rugby. Rhodesia was Zimbabwe’s name before transformation into black majority rule in 1980.

De Klerk won selection into the national side following excellent performances for Nyazura Rugby Club and Odzi Country Club, two clubs in farming districts of Manicaland which were some of the strongest rugby teams in the country in the old era.

When De Klerk’s farming business grew, he went into administration post-playing, generously funding rugby in the province through the Manicaland Rugby Board.

The Zimbabwe Rugby Union released a condolence message: “The Zimbabwe Rugby Union president Aaron Jani and the board would, on behalf of the rugby community, like to express their sincere and profound condolences to the De Klerk family, Old Nyazura Rugby Club community, the Manicaland Rugby Board on the sad passing of rugby legend Piet de Klerk Snr on the 6th of August in Mutare.

Piet played for Nyazura Rugby Club where his rugby talent was honed and played for the Rhodesia (Zimbabwe) national team. Piet de Klerk Snr captained the national team and played in the famous Rhodesia-New Zealand games in Harare (then known as Salisbury) and at Hartsfield in Bulawayo. His contribution to the game in Nyazura and Manicaland was immense as he was a hard-tackling player and astute administrator – gentle, fair and down to earth. An unassuming and friendly family man off the field of play. His rugby legacy extended to his sons Piet Jnr, Tiewe and Koos, who all went on to play for Mutare Sports Club. We join his family and community in remembering a gentle giant in celebrating his life and reflecting on his rugby contribution in Nyazura, Manicaland and Zimbabwe (Rhodesia). He was in the stages of writing a book on his rugby experiences and playing and winning against the All Blacks.”

It is not known how many members of the squad that defeated the All Blacks, in a match known as the “Miracle of Bulawayo”, are still surviving.

De Klerk, who arrived in Rhodesia from the Cape in the 1950s and settled in Manicaland, was distantly related to FW de Klerk, South Africa’s last white ruler.

Related Topics:ObituaryPiet de Klerk
Up Next

Such a short memory, Khaled and Tamim!