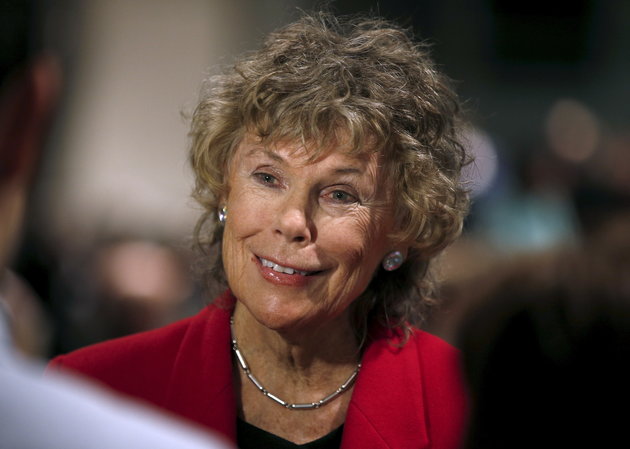 Labour MP Kate Hoey of the "Grassroots Out" campaign, listens during a media interview an event in London, February 19, 2016. REUTERS/Peter Nicholls

THE United Kingdom government is plotting tougher sanctions against President Emmerson Mnangagwa’s administration, arguing the measures put in place have failed to nudge Harare towards reform, hence the need to change tack.

UK accuses Mnangagwa of deceiving diplomats accredited to Zimbabwe into believing he was a pragmatist soon after taking over from the late former President Robert Mugabe via a military coup in November 2017 before showing his true colours in perpetrating human rights violations and corruption.

The UK also accuses Mnangagwa’s government of human rights violations, corruption and failure to observe the rule of law. Debating in the UK Parliament last week, the British MPs said there is a need for measures that do not further enrich the already wealthy political elite, while impoverishing millions of Zimbabweans, who are bearing the brunt of corruption and a poorly run economy.

Kate Hoey (pictured), a member of the House of Lords, said the world must remain alert to the Zimbabwe crisis and not let other global challenges, including the Russia-Ukraine war, blind them to the situation in the southern African nation.

Hoey said she was part of a team that visited Zimbabwe before the 2018 general elections to write a report for the UK branch of the Commonwealth Parliamentary Association on the possibilities of a free and fair election and the chances of Zimbabwe rejoining the Commonwealth and indications were that the country was not yet out of the woods.

“It was a depressing report. The Zimbabwean Electoral Commission was not impartial and the voter roll was inadequate, for starters. The constitution was being ignored, so we wrote of our disappointment and surprise that our ambassador (Catriona Liang) at that time seemed to be so close to the ruling Zanu PF party. I have to say that the current ambassador is doing a great job and is widely respected,” Hoey said.

She said the diplomats were fooled by Mnangagwa into believing he was a reformist as indications now show he simply was perpetuating what the late former President Robert Mugabe was pursuing in his 37 years in power.

“Many of us in the All-Party Parliamentary Group for Zimbabwe at that time tried to warn of the danger and futility of expecting change from Mnangagwa. Not for nothing is he known as the crocodile,” she said.

“We were dismissed by some as needlessly pessimistic and lacking understanding of his desire to change but, as forecast, the pattern set by Mugabe was carried forward with sustained intensity and vigour, complying with plans cunningly crafted with the help of the military.”

“Those had been planned for some time. Unfortunately too many of the agencies working in the country and too many diplomats initially fell for his lies and rather evil charm. We were told that a new chapter of peace, economic efficiency and prosperity would be opened up. They have certainly opened up a new chapter but it is the same horror story of corruption, greed and violent oppression. The only expertise Zanu PF has ever shown, I am afraid, is in brutality, lying, theft and terror.”

She added: “We need more governments around the world, as well as the media and among those who can bring influence online to call to account and shame the Zanu PF thugs and their stooges in the army, police and judiciary. There is no rule of law in Zimbabwe. The crisis there blights the whole of Africa, particularly the Sadc region.”

She said the UK government must ensure diplomats in Harare are properly briefed so that they can actively and productively engage in rallying support for democracy, reform, and against “the disastrous corruption that is ruining the lives and livelihoods.”

“By having this debate here, we are showing that we will not give up on the Zimbabwean people and their longing for their beautiful country to be restored to its rightful place as the breadbasket for Africa; a country where human rights and democracy are cherished. I ask the government to do everything possible, in the next year, to help ensure free and fair elections in that wonderful country.” John Thomas Alderdice, a member of the House of Lords, argued that sanctions imposed on Zimbabwe have not hit hard enough as the regime continues on a repressive path.

“After these very many years I ask myself, as I ask the minister, what is the purpose of our sanctions now? If all these abuses which have been described are continuing, do Her Majesty’s government believe that the sanctions are going to resolve the problems we are discussing? I think not,” he said.

He said there was a need for new strategy as sanctions portray the UK as an old colonial power that, decades on, remains insistent on sanctions that have not worked to change things for the better.

“It seems that this requires post-Brexit Britain to review its approach to policy with Zimbabwe and other countries with which we have difficult historic relationships.”

“In the context of Zimbabwe in particular, I would be grateful if the minister and his colleagues would begin to review the effectiveness and value of sanctions and see whether there are other, better ways of bringing about the changes we all want to see,” he said.

Ray Collins, a member of the House of Lords, insisted the UK was right to impose sanctions on Zimbabwe but there was a need to review the implementation.

“While I hear what the noble lord, Lord Alderdice, says, I believe the UK government have been right to implement sanctions in response, including asset freezes, arms embargoes and travel bans,” Collins said.

“The minister has our full support in doing so, but there is a case for the government to review and monitor the effect of these sanctions, particularly on how we might work more effectively with our allies to review their implementation and effectiveness,” he added.

He added there was a need for collective action to try and stop the passing of the Private Voluntary Organisations (PVOs) Amendment Bill which he described as restrictive to civic space.

The UK government, he added, should continue holding Mnangagwa to account, adding the regime should outline specific actions on how it intends to do that in the months ahead.

Jonathan Oates, a member of the House of Lords who initiated the debate on Zimbabwe, said a lot of constitutional violations have been recorded under Mnangagwa’s rule.

“I put them on the record here so that there is an understanding of the level and extent to which the constitutional rights of Zimbabweans were violated by their own government and in the hope that, ahead of the 2023 general elections, the international community and, most particularly, countries in the region will engage with Zimbabwe’s government to persuade them to uphold the constitution and the right of the people to freely choose their leaders,” he said.

Oates, a former secondary school teacher in Zimbabwe’s rural areas in the late 1980s, accused the Mnangagwa administration of using the same tactics used by the late former Rhodesian prime minister Ian Smith to oppress the people and silence critics.

“I finish where I started: with an acknowledgement of Britain’s deeply troubled legacy in Zimbabwe and a reflection on the tragedy that today Zanu PF is using the same tactics and institutions, and in some cases the very same laws, that were employed by Ian Smith’s regime. It is doing so to serve the very same purpose — to oppress and silence the people so that, unhindered, it can use the wealth of the country for itself,” he said.

In response, the UK’s minister of State, Department for the Environment, Food and Rural Affairs and Foreign, Commonwealth and Development Office, Frank Zacharias Robin Goldsmith, said the decision to have Zimbabwe rejoin the Commonwealth was a members’ collective effort and as it stands, the country is not yet credible enough.

He added there was concern over political violence and the banning of opposition Citizens’ Coalition for Change (CCC) rallies, among other human rights violations.

“The noble lord mentioned Vice-President (Constantino) Chiwenga’s call on 26 February for the CCC to be ‘crushed like lice’, which was perhaps the most alarming language that was used. While we acknowledge President Mnangagwa’s subsequent call for peace, the lack of accountability for the Vice-President’s language is clearly a problem. Let me be crystal clear on behalf of the UK government: language like that has no place in any country or any elections ever.”

“In relation to the question on sanctions raised by the noble lord, Lord Alderdice, and, coming from a different angle, by the noble lord, Lord Collins, who I thank for his support of the government’s position, our designations seek to hold to account individuals responsible for egregious human rights violations and corruption.”

“The sanctions do not target and seek to avoid impact on the wider economy and the people of Zimbabwe. They will be retained as long as accountability is lacking and the human rights situation in Zimbabwe justifies them.”

“With national elections due in 2023, we are also concerned by the government of Zimbabwe’s gazetting of the Private Voluntary Organisations Amendment Bill. If passed into law and implemented, the Bill may be used to restrict the ability of civil society to operate in a way that would be out of line with the government’s commitment to reform,” the minister said. “We have asked the government to re-examine the provisions that appear to restrict these freedoms and are out of step with Zimbabwe’s constitution. We have raised our concerns with the government of Zimbabwe, including the ministry of Foreign Affairs on 16 February, and we will continue to do so.”