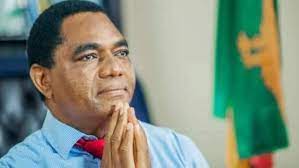 Economists accuse bondholders of standing to make huge profits at the expense of the crisis-hit country.

MORE than 100 economists and academics have urged international lenders to crisis-stricken Zambia to write off a significant slice of their loans during financial restructuring talks this month.

Zambia is seeking up to US$8.4bn in debt relief from major lenders, including private funds run by the world’s largest investment manager, BlackRock, to help put its public finances back in order.

In the run-up to what are understood to be tense negotiations involving the Chinese, French and British governments, the anti-poverty charity Debt Justice said that only a major debt write-off could save the Zambian economy from complete collapse.

Led by the Columbia University economist, Jeffrey Sachs, and Jayati Ghosh, the chair of the Centre for Economic Studies at Jawaharlal Nehru University, the 100-plus global group of economists and experts said in a letter to the creditors’ negotiating committee that Zambia should be given a waiver from debt interest payments due until 2023.

Earlier this month, the International Monetary Fund (IMF) approved a US$1.3bn loan to the country, which defaulted on its US$17.3bn of external debt after a collapse in its public finances during the pandemic.

Funds run by BlackRock are among the largest private owners of Zambia’s bonds, holding US$220m. Some are worth almost half the value they were sold at. Eurobonds worth US$1bn that mature in 2024 plunged 6.3% in the last week to less than 56% of their face value.

Debt Justice, formerly known as the Jubilee Debt Campaign, has estimated that BlackRock could make 110% profit for itself and its clients from Zambia if debt interest payments are paid in full.

The country has three main private sector bonds that pay an average 8.1% in interest.

The letter said: “Because of the high interest rates and the fact Zambia’s bonds have been trading at well below face value since 2018, many bondholders stand to make huge profits at the expense of both Zambian citizens and creditor countries if paid at face value.

“It is therefore imperative that BlackRock and other bondholders agree to fully engage in a large-scale debt restructuring, including significant haircuts, in order to make Zambia’s debt sustainable.”

Tim Jones, the charity’s policy head, said the IMF loan gave the country some breathing space, but the US$8.4bn of interest payments due over the next couple of years should be “cancelled permanently, not rolled over to the 2030s to fuel another debt crisis next decade”.

Chad and Ethiopia applied last year for debt relief under the G20’s common framework, but Jones said negotiations have yet to get off the starting blocks. Sri Lanka and Bangladesh have also asked for bailouts under IMF schemes to support countries devastated by the climate crisis.

Zambia, which has cut health and social care spending by a fifth in the past two years to balance its budget, has seen its debts soar in recent years to fund infrastructure projects, many to help the country supplement drought-affected hydropower plants.

Solar energy projects have made the country almost self-sufficient in electricity, but the high cost of borrowing, local corruption and the coronavirus crisis have crippled the country’s finances.

Further loans from the IMF have been tied to commitments to end fuel subsidies to households and businesses, pushing the inflation rate above 20% last year before it eased to 9.8% in August.

Of Zambia’s external debt, 46% is owed to private lenders, 22% to China, 8% to other governments and 18% to multilateral institutions. China is among the government lenders to agree a longer debt repayment schedule that private lenders, including banks, have so far resisted, Debt Justice said.

A BlackRock spokesperson said it wanted “a sustainable long-term outcome for Zambia” but disputed the charity’s claim it would profit from a rescheduling of debt interest payments, saying it was likely to make losses when the bondholdings mature.

It said: “We regard it as our obligation to play our part responsibly, alongside all other creditors, in ensuring there is a path towards a sustainable outcome for sovereign debt issuers in distress.

“As an asset manager, we are a fiduciary to our clients, people from all walks of life. The money we invest on their behalf is not our own and we are obligated to act in our clients’ best financial interests at all times.”

Jones said BlackRock had likely bought Zambian bonds at rock-bottom prices when it was clear the country was already in trouble.

BlackRock added that with Zambian bonds trading below their sale value and interest payments suspended since September 2020, “our clients have already experienced losses with respect to their holdings of private sector sovereign debt of Zambia”.

Related Topics:chinaimfZambia debt
Up Next