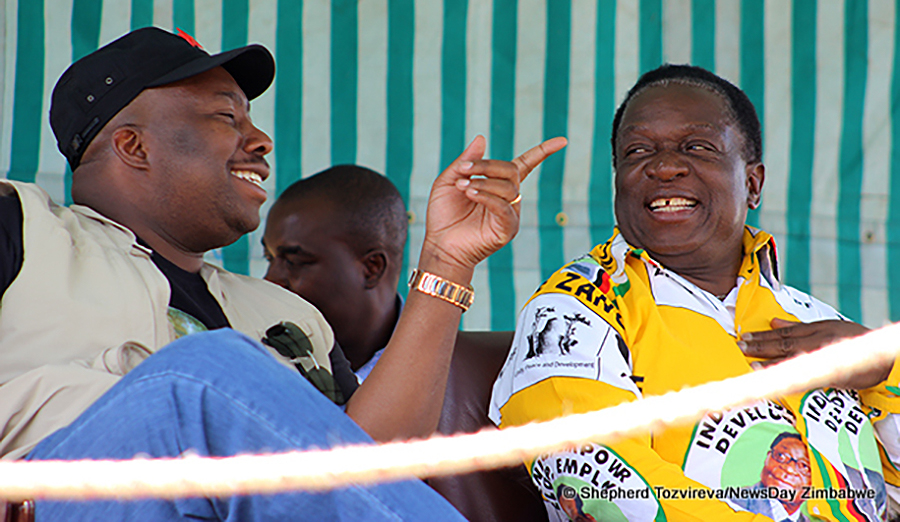 SELF-EXILED former Zimbabwean minister and Zanu PF political heavyweight Saviour Kasukuwere (pictured) is living in fear in Johannesburg, South Africa, as the Harare government steps up pressure behind the scenes to get him back home for retribution and neutralisation over political disputes ahead of crucial 2023 general elections.

Kasukuwere, a young turk currently in the political wilderness yet with presidential ambitions, is seen in top official circles as a threat and as an enemy of the state.

This comes amid new fears that a Serbian multi-disciplinary hit squad has been assembled and deployed to Johannesburg by deep state actors, whose source of authority is shadowy, to target him for capture or elimination if need be. Capturing and smuggling him back to Zimbabwe — renditioning — has been explored as a priority as part of the strategy by deep state actors.

A deep state is a clique of shadowy people, typically influential members of government agencies or the security, involved in secret manipulation or control of public policy and levers of state power. At the official level, the Zimbabwean government has through diplomatic and intelligence channels always raised the Kasukuwere issue.

There have also been secret talks between Zimbabwean and South African official teams about him of late, showing he is a matter of serious and urgent concern to Harare, which accuses him of plotting to destabilise government, together with his allies in exile and back home.

“It’s a big issue to Zimbabwean government and Zanu PF officials. First, Kasukuwere is seen as a political force to reckon with from a social base point of view, given his political appeal largely in Mashonaland provinces. Second, he also has some security background and is seen as part of sleeper G40 cells that may be activated for political action when the need arises. Third, Kasukuwere has some financial means and political networks. He has met senior ANC officials and many political players in South Africa from Zimbabwe and there to discuss his situation and politics,” an official source said.

“Fourth, besides South Africa, he has other regional networks. Fifth and mostly importantly, he is seen as Vice-President Constantino Chiwenga’s ally. For these reasons, and many others, he is viewed as a threat and an enemy of the state.”

The Zimbabwean government views Kasukuwere, together with his former Zanu PF G40 allies Walter Mzembi, Patrick Zhuwao and Jonathan Moyo, as a threat to national security. Hence, they were blamed for the 30 July 2020 anti-government stayaway and prior to that, the January 2019 protests over fuel price hikes.

If allowed to come back, Kasukuwere and his allies may wreak havoc on the political terrain as they did before the 2017 coup, President Emmerson Mnangagwa and his advisers fear, according to sources.

Official sources say Kasukuwere and his associates are classified by state security agents as a danger to Mnangagwa’s government from political and security perspectives, and that should not be taken lightly.

They should not be allowed back home, officials insist. Moyo and his former Zanu PF G40 faction colleagues, who were opposed to Mnangagwa’s rise at the zenith of the late former president Robert Mugabe’s succession battle while coalesced around ex-first lady Grace Mugabe, now live in exile as they fear being jailed or killed after surviving night raids and hails of bullets by the army as it shot its way to power.

Zanu PF even moaned to the ANC about opposition EFF leader Julius Malema’s fierce criticism of Mnangagwa and his government. However, the ANC told Zanu PF leaders that it will continue to meet with any Zimbabweans who are legal in South Africa like it did with Mnangagwa when he fled from Mugabe in November 2017 just before the coup.

“Former President (Ian) Khama’s Party, BPF (Botswana Patriotic Front), has been soundly beaten showing no such subversion against successors ever succeed. Kasukuwere and company have a lot to learn from this sobering result,” wrote Charamba who the used the pseudonym Jamwanda on Twitter.

Khama is fighting his former deputy, Mokgweetsi Masisi, now Botswana President. He broke away from the ruling Botswana Democratic Party to form BPF, amid a fierce power struggle that is still raging and has spilt into the region.

These days Charamba, who always interferes in the politics of neighbouring countries like South Africa, Zambia and Botswana, offending diplomatic protocols, runs under @ Tinoedzazvimwe1 on Twitter. At the time, there was a Kasukuwere youth campaign running under the #TysonWabantu tagline.

As a result, Kasukuwere is kept under close monitoring in South Africa, like Moyo is in Kenya. Security sources previously told The NewsHawks relating to the Moyo situation: “It’s a very serious issue.

Remember that our agents previously used the Global Positioning System (GPS) to track his (Moyo) movements via his phone (there is evidence of that); they even texted him his location at a Nairobi hotel where he was having a meeting.

“Second, state agents breached security at his residence in Nairobi and got pictures of him walking into the premises from the CCTV of the complex that he lives in. They then put the photos online to expose and dramatise his security vulnerability.

“Apart from vigorously pushing for his extradition from Kenya, they also sought to put him on the Interpol red list to designate him a wanted man. They further made this public to pressurise him to run away too far from home where he might lose touch or keep quiet to give Mnangagwa relief.

“Meanwhile, the inter-security taskforce has been hunting him down. Further, (former prosecutor-general Kumbirai) Hodzi headed another taskforce to Rwanda to find ways from there of bringing him to book. The security taskforce largely comprises CIO (Central Intelligence Organisation), counter-intelligence, military intelligence and police details.

“Beginning this year the security taskforce started exploring ways of seizing Moyo’s properties at home. Its members from CIO have been harassing chiefs in his rural Tsholotsho home over him since January. They have also sought to politically punish him by several other means.”

Further, Moyo, like Kasukuwere, is also a marked man because he is suspected of closely working with Chiwenga to oust Mnangagwa in 2023.

This has seen Mnangagwa’s government pulling out all the stops to get Kasukuwere and Moyo by all means. After surviving a night military raid at home in Harare with his family and Moyo’s, Kasukuwere escaped to Mozambique, Kenya and then South Africa.

He tried to return home in 2018, but fled when he realised that Mnangagwa’s hatchet men wanted to get him. There was even a tenuous attempt to link Kasukuwere with the 2018 White City grenade attack in Bulawayo that was reportedly targeted at killing Mnangagwa, who has said it was an inside job.

While political players are not routinely gunned down or assassinated in Zimbabwe as in other countries, there is a history of mysterious accidents that have remained unresolved, yet widely seen as political hits.

On 16 August 2011, Zimbabwe awoke to the news that retired former army commander General Solomon Mujuru, aka Rex Nhongo (his war alias), who was Mugabe and Mnangagwa’s bitter political opponent, had died in a mysterious fire at his farm in Beatrice, 60km south of Harare.

Just four days later, on 20 August, amid public statements of grief from across the political spectrum, and growing speculation about the cause of his death, Mujuru’s remains were buried at the National Heroes’ Acre in Harare at a huge state funeral attended by tens of thousands of people.

After the “inexplicable, horrendous fire accident” — as Mugabe then described it — there was only a “small pile of charred bones and ash” to be buried, and workers reportedly needed “shovels to scrape his remains off the floor”.

Burnt beyond recognition, investigations by the media showed a blue accelerant was used to burn his body.

Nevertheless, there was no hard evidence to confirm a plethora of rumours that emerged in the months that followed, which remain unresolved, despite police investigations and an official inquest.

Other high-profile deaths like that of former Zanla commander Josiah Tongogara and Zanu chairperson Herbert Chitepo’s assassination during the liberation war remain unresolved and mysterious.