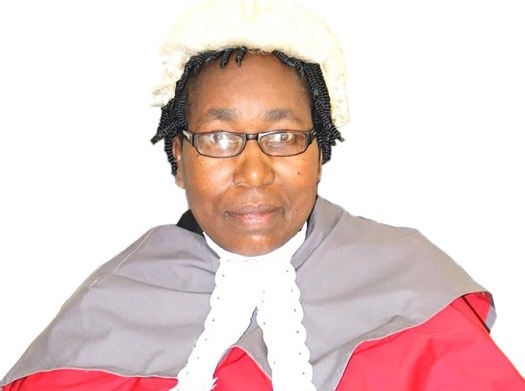 HIGH COURT judge Justice Joseph Chilimbe has dismissed yet another challenge by former colleague Erica Ndewere (pictured) who was questioning the authority of the Judicial Service Commission (JSC) secretary in filing an application demanding her car back.

Ndewere, who was earlier this year fired on misconduct allegations, is embroiled in a bitter fight with the JSC over a Mercedes-Benz vehicle she was given during her time in office. She may now have to give up on the vehicle after the court ruled JSC secretary Walter Chikwanha was entitled to demand it back.

The former judge was in May this year ordered to immediately surrender the Mercedes-Benz E300 sedan she was allocated by the government during her time in office. This followed a successful demand by Chikwanha.

As the fight raged on, last week Chief Justice Luke Malaba and Chikwanha sent staff to seize the official car which Ndewere had not surrendered after she challenged the court order. Reports say messengers spent four hours on her property, eventually breaking into the garage and assigning a locksmith to forcibly open the car.

At that time, the current challenge which has been thrown out was pending before the courts. Ndewere has since lost the case. Justice Chilimbe said Chikwanha had authority to file an application on behalf of the JSC.

“Having considered the arguments submitted on behalf of the parties, I find no substance in the challenge to the validity of the JSC resolution and the subsequent disposition of the founding affidavit by the JSC’s Secretary, Mr. Walter Chikwana, such validity to institute the present proceedings, having been established and confirmed by this court, the Supreme Court and Constitutional Court.

“Accordingly, it is ordered: that the preliminary objections raised by the respondent be and is hereby disallowed with costs in the cause,” ruled the judge.

After Ndewere’s objection, Chikwana had filed as evidence a resolution made on 6 June 2019 by the JSC authorising him to sign legal documents on behalf of the JSC.

The judge supported him, saying the question as to whether Chikwana had the requisite authority was settled by the High Court, Supreme Court and Constitutional Court.

Ndewere was removed from office by President Emmerson Mnangagwa on 17 June 2021 over misconduct allegations.

The JSC said it gave her two top-of-the-range vehicles, a Land Rover Discovery 4 and Mercedes-Benz E300.

Ndewere requested and was allowed to purchase the Land Rover Discovery 4 under given conditions of service on 9 April 2021.

At the time of her removal from office, she allegedly retained possession of the Mercedes-Benz, which is registered in the name of the Master of the High Court, a former department of the JSC. On April 19 2022, the JSC demanded the return of the vehicle from Ndewere, but she refused.

The former judge insisted she was entitled to purchase the vehicle. Ndewere argued that the vehicle was not owned by the JSC but the Office of the President.

On the other hand, the JSC insisted that the option to purchase the vehicle was no longer available to Ndewere because she was no longer a sitting judge. In granting the application, the judge ruled that the JSC had established a reasonably arguable case, which deserves protection pending litigation. — STAFF WRITER.

Why Mercedes-Benz was seized

Kasukuwere lives in fear in Joburg as Harare steps up pressure