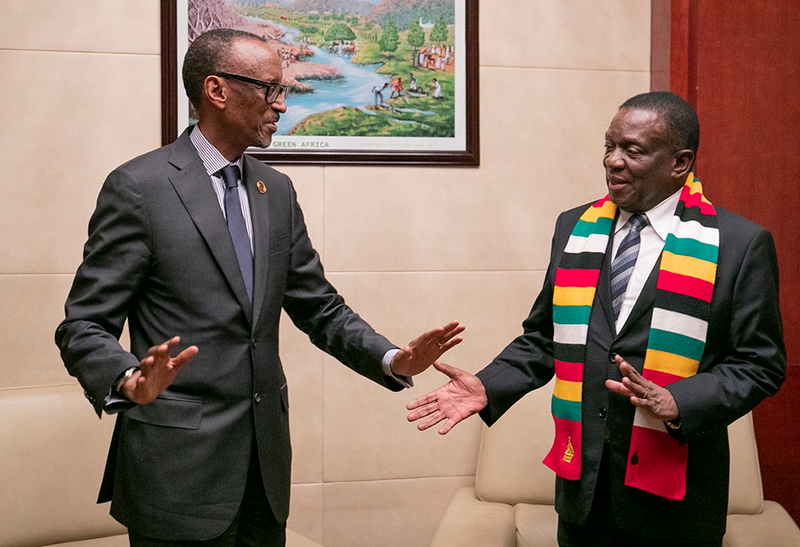 RWANDAN President Paul Kagame (pictured) recently postponed his visit to Zimbabwe at the end of last month to launch a massive US$800 million rural electrification project, which President Emmerson Mnangagwa sees as a game changer in his bid to secure re-election in next year’s crucial general elections, due to several unrelated issues.

Diplomatic sources told The NewsHaws Kagame was forced to delay the visit for mainly three reasons: To allow the government to complete its street lighting programme to fit 1 200 new lights in Harare which it needs to showcase during his visit; his trip to Mozambique; and security concerns during the weekend of the Zanu PF congress.

The street lighting programme was initiated by Mnangagwa and Kagame, and is expected to cover 35 kilometres of Harare’s largely dark major road network. It will be extended to other cities and towns. Zimbabwe’s streets are largely dark during the night due to poor lighting, a manifestation of the country’s political and economic failures.

The other reason Kagame did not come is that during the weekend he was expected to visit Harare via Maputo, his schedule changed and thus he had to delay the trip to Zimbabwe. Kagame was in Maputo for a one-day working visit.

Rwanda and Mozambique enjoy good bilateral relations. Since July 2021, a contingent of the Rwanda Defence Force and the Rwanda National Police has been deployed in Mozambique’s Cabo Delgado region to combat Islamic insurgents in the gas-rich northern part of country.

Diplomatic sources say Kagame did not come as he was also concerned about his security during the Zanu PF congress period amid the controversial importation of AK-47 assault rifles — the Beitbridge arms saga — in the run up to the party’s gathering, with Mnangagwa reportedly being the target of a planned attack.

The NewsHawks has comprehensively covered that story. Kagame was expected to come for the launch of the electrification project, which Mnangagwa views as his election trump card, given that he has not fulfilled a litany of the ruling party’s promises.

Among many unfulfilled promises, Mnangagwa in 2018 promised to “ensure provision of electricity to all rural areas” if he won the elections, which he did by a wafer-thin margin in the presidential poll. Kagame personally mobilised the funding after Mnangagwa pleaded with him to do so, according to Rwanda’s daily newspaper, The New Times, which is pro-government.

The programme is reportedly aimed at transforming livelihoods of the rural population in the southern African country. Mnangagwa previously said Kagame will attend the unveiling of the rural electrification programme at the end of this month.

He recently said Kagame helped him secure US$800 million funding for the rural electrification programme. Mnangagwa told Zanu PF supporters in the lowveld in Chiredzi that the programme feeds into his government’s rural development agenda, which encompasses the creation of smart homes equipped with clean energy, potable water and nutrition gardens.

“We have a programme which is coming at the end of this month. President Kagame of Rwanda is visiting us for this occasion,” Mnangagwa told a crowd at a Zanu PF “thank you” rally.

“This is after I spoke to him to say, fellow brother, our country Zimbabwe is under sanctions but we have a programme to ensure everyone has access to electricity wherever they are. President Kagame then spoke to his friends and he secured US$800 million. So that’s the facility he is coming to launch.”

Mnangagwa said every Zimbabwean will soon have electricity regardless of where they are.

“If you go to Rwanda and see what President Kagame has done in the villages, it is well-organised. Over there (in Rwanda) they work in unity with government assistance. That way, there is no family which is left behind because every household is assisted out of poverty,” he said.

“There is a shortage of electricity in the country and the Sadc (Southern African Development Community) region. In our case, it is mainly because of the economic growth we have experienced in recent years.”

Zimbabwe is facing serious electricity shortages due to limited power generation capacity. Kagame has identified energy as an essential ingredient for sustainable growth and development.

His government recognises the importance of providing “appropriate, reliable, and affordable energy supplies for all Rwandans” if the country is to achieve middle-income status.

It is envisaged that the rural electrification project will see almost all of Zimbabwe’s rural population accessing electricity in a move that is expected to boost his popularity ahead of the crucial polls. Mnangagwa has largely not delivered on his Zanu PF manifesto.

Kasukuwere lives in fear in Joburg as Harare steps up pressure