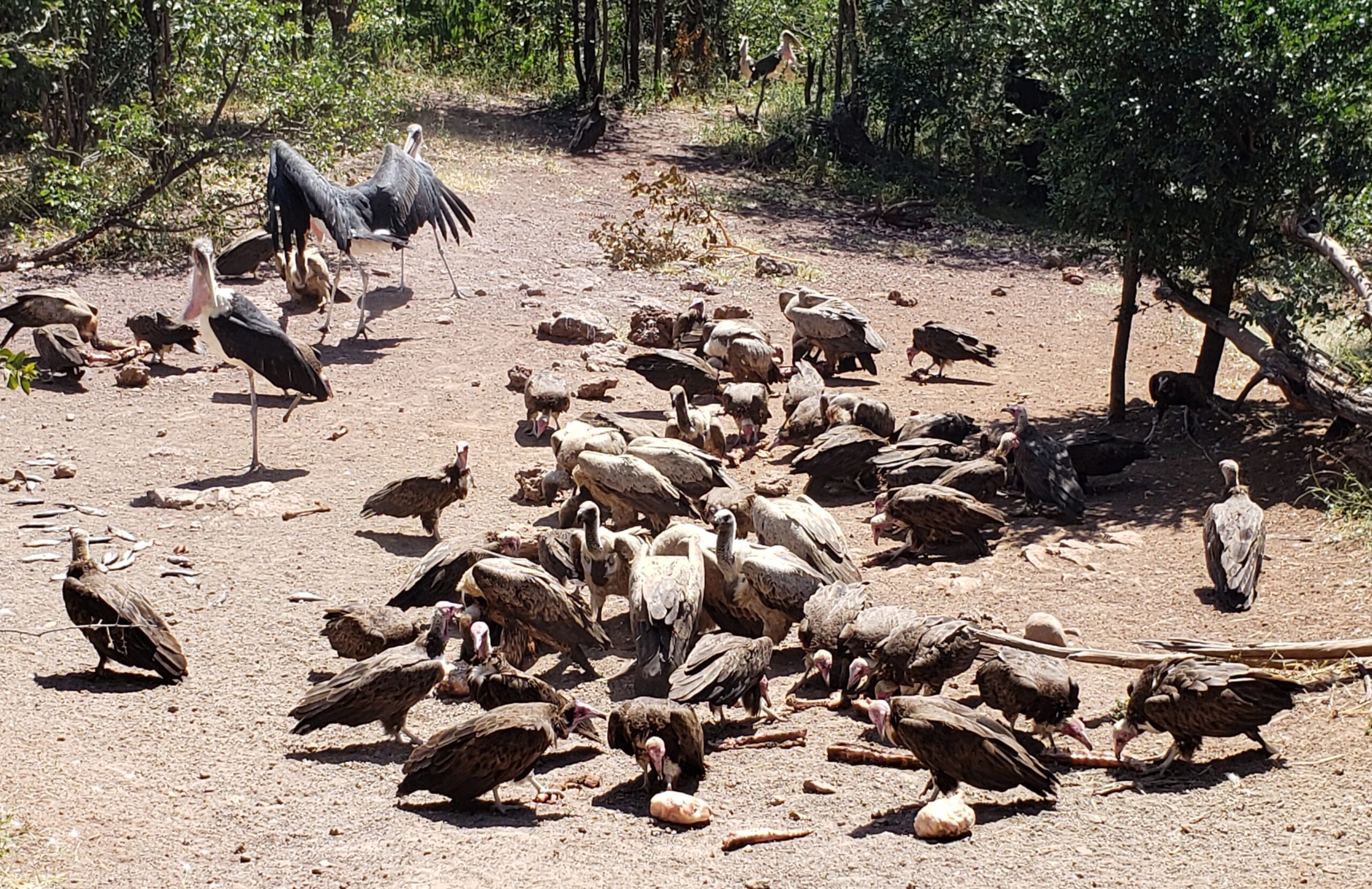 It is a scorching hot Thursday afternoon and a group of ecstatic primary school students accompanoed by their teacher are following Zulu.

He is one of two wildlife officers at the Victoria Falls Safari Lodge in charge of the organisation’s Vulture Restaurant initiative.

Over the years, vulture populations in Africa have declined drastically due to a number of factors, including poisoning and traditional use of vulture body parts as medicine. According to Birdlife International, vultures have become one of the most threatened families of birds on the planet.

Zimbabwe is home to six of the 11 main vulture species that are found on the African continent, all of which are either endangered or critically endangered, according to the World Conservation Union (IUCN) list.

Against this backdrop, the Vulture Restaurant initiative (in which vultures are fed leftover animal carcasses)  is being adopted by numerous wildlife sanctuaries, hotels and lodges as an innovative way of protecting the dwindling vulture population.

The initiative is not only limited to the provision of food for the birds, it has grown to become an educational programme through which local and international tourists are taught on the threats vultures face and the importance of the birds of prey to the ecosystem.

“One of the major reasons for vultures being endangered is that their food supply is under threat due to increased poaching activities where poison is being used to kill large animals like elephants. If the birds consume the carcass of the poisoned animal, they die in huge numbers, thus our supplementary feeding programme provides them with a safe food source.”

“Each day at 1pm, visitors to the lodge are invited to walk a short distance to the game park at the front of our lodge, where a guide drops some meat so that the vultures can descend and eat. Whilst the visitors are looking at the spectacle of the feeding birds, our senior wildlife officer Aleck Zulu sharpens their understanding of the importance of vultures not only to the wild but to us as humans and our survival in harmony with nature,” said Anarld Musonza, the Victoria Falls Safari Lodge general manager.

Shangani Wildlife Sanctuary (SWS), which is home to another successful Vulture Restaurant initiative, feeds the birds with offcuts from a nearby abattoir as well as wildlife carcasses.

“The restaurant has been a very successful platform to educate, not only international tourists but also local villagers, mostly school children, on the importance of vultures and build support on their conservation efforts.”

“Not only are we happy with the numbers of visitors we receive per day, we are also delighted with the increase in vulture numbers that have been coming to feed on a daily basis which has risen from approximately 200 to 350 since we started,’’ said SWS.

“Vultures play an essential role in maintaining a healthy ecosystem. These critically endangered birds provide an incredible ‘clean-up’ service for the environment. By eating decomposing animals from the landscape, we are guaranteed of an environment free from diseases such as anthrax, rabies, tuberculosis and botulism which, if allowed to spread, have catastrophic effects on both humans and animals,” said Roberts.

“Since the 1990s India has been battling with rabies that thousands of people die from the disease every year. Going that route would be catastrophic for our nation,’’ she said.

Pierini also paid tribute to every organisation contributing towards vulture conservation through the Vulture Restaurant initiative.

“As Birdlife Zimbabwe we are grateful towards every organisation that is contributing towards vulture conservation in the country. Apart from the birds’ immeasurable contribution to the cleanliness of our environment, they also play a critical role in alerting wildlife rangers on locations of poached animals through how they circle in the sky above dead carcasses.’’

“Vultures have a slow gestation period so it’s also important that we take care of their nests, eggs and young ones as human population is rapidly encroaching further into wildlife habitats,’’ Pierini said.