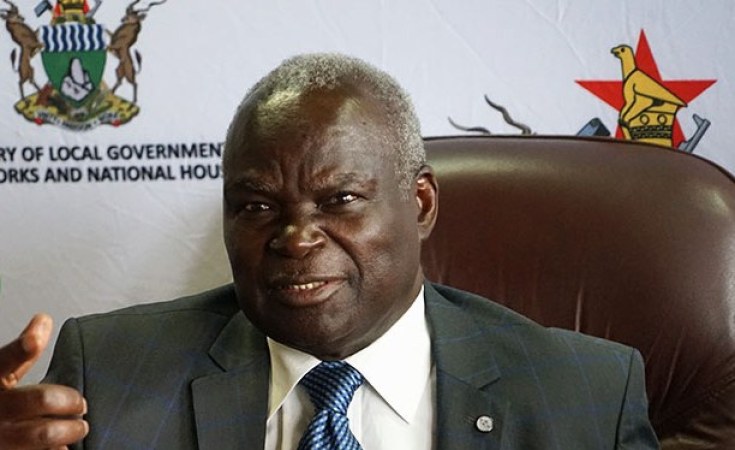 LOCAL Government minister July Moyo (pictured), who is entangled in Victoria Falls land scandals — with his ally mayor Somveli Dlamini currently out of jail on bail after he was arrested for a fraudulent land deal — is fighting hard to remove town clerk Ronny Dube for resisting his deals.

Moyo, who is accused of corruptly interfering in Victoria Falls land allocations, in October appointed a team of Local Government officials to investigate Dube over various charges ranging from unprocedural allocation of land, withdrawing council money without authority, misleading council and incompetence, but a preliminary report produced by the probe team did not find the town clerk guilty of any criminal offence.

The probe team was chaired by the director of local authorities, Mike Mazai and consisted of director of local governance Tapera Mugoriya, chief financial officer Alpha Nhamo, a legal adviser only identified as C. Tshuma and Land Siansole Kabome, the district development coordinator of Binga.

Officials in the ministry however said Moyo was so unhappy with the findings that he summoned the team on 14 November and ordered them to write another report, implicating Dube as he desperately wants him removed from his position.

Moyo appointed a team to investigate Dube, following a chain of controversial activities and clashes between the mayor and the town clerk.

In October, war veterans in Matabeleland North and members of the Victoria Falls Combined Residents Association organised a demonstration against Dube, for alleged corruption in the sale of land. Dlamini met war veterans ahead of the demonstration.

The war veterans then locked Dube out of his office, demanding an investigation.
The demonstration resulted in the police and the Zimbabwe Anti-Corruption Commission (Zacc) descending on council while Moyo assembled a probe team to investigate allegations against the town clerk.

Zacc officials, however, arrested the mayor for corruption after the investigation, while the town clerk was left free.

The ministry of Local Government however continued its probe, looking into five allegations: allocation of brewery stands to Jackleberry Investment without council authority; allocation of land in dumpsite/landfill site and sewage pond area without council resolution; withdrawal of US$84 000 from a council account; misleading council in awarding the tender for sale of stand number 8300 to Zambezi Properties; and incompetence, dereliction of duty and failure to supervise staff.

The minister’s investigation team produced a preliminary report which did not find Dube guilty, although it highlighted administrative lapses. The report was submitted to the minister, but he was unhappy as it did not nail Dube.

As a result, the minister ordered his investigation team to doctor the report to suit his design — finding Dube guilty.

On the allegations of incompetence, dereliction of duty and failure to supervise staff, Dube was accused of failing to solve perennial service delivery challenges, namely water shortages in Mkhosana suburb, lack of sewer and serviced roads at Aerodrome, inconsistent refuse collection, fire eruptions and the dumpsite and water flooding houses during the rainy season.

It was alleged that the persistency of these issues pointed to Dube`s incompetence, dereliction of duty and failure to supervise staff contrary to his express conditions of service.
The probe team however found that there was no appraisal for the town clerk and could therefore not validate the incompetence allegations.

“The Town Clerk of the City of Victoria Falls Mr Ronny Dube, this current quarter has not been appraised. The appraisals are done quarterly.

“We could not ascertain how he is incompetent because there are no appraisals. His Worship the Mayor of the City of Victoria Falls does not even know or is not aware of his role.”

It was further alleged that there was no council resolution to allocate the brewery to the said investor, hence the purported lease was illegal.

“The investigation team found out that there was no Housing Policy as regard to the allocation for lease or disposal of council land.  The investigation team found that the copy of the proposal to dispose the land was not displayed as a requirement, contrary to the provisions and stipulations of Section 152(2) of the Urban Councils Act [Chapter 29:15],” the report reads.

“The copy of the proposal or notice was supposed to be submitted to the Minister in accordance with Section 152(2) of the Urban Councils Act [Chapter 29:15]; and the Minister was supposed to comment on this as provided for in Section 152 (3) of the Urban Councils Act [Chapter 29:15]. The law was partly followed to its finality. Three bidders submitted their proposals namely: Jackelberry Investment Ltd, Schweppes Zimbabwe and Lionel McCauley & Kimberly Sparrow.

“After receipts of the bids evaluation was done but no due delegacy was done, checking if the company is registered, do they have offices, do they have existing projects which they are also managing so that when they evaluate they will know the company profile for each bid, that one was not done.

“They proceeded to the Housing Committee that deferred it back to Management for more details. The Housing Committee sat in July 2022 when the Town Clerk of the City of Victoria Falls Mr Ronny Dube had already written a letter of request for a lease rental deposit for Chinotimba Brewery on 26th of May 2022 to Jackelberry Investment without Council resolution which was highly irregular.”

Dube was also accused of unilaterally allocating the council dumpsite to Greenline Africa in partnership with Mosi oa Tunya waste and landfill (Pvt) Ltd without a council resolution.
“The investigating team found out that there was no Housing Policy as regards to the allocation for lease or disposal of council land,” the report reads.

Dube was also accused of withdrawing US$84 000 from council coffers to buy a vehicle.

The probe team found that the town clerk could be provided a vehicle through two ways: through the issuance of a service vehicle or through a loan.

“The Contract did not provide for a discount on vehicle loan which was highly irregular. The Town Clerk requested 70% of the amount approved in the Cabinet which was supposed to be US$80 302.60 instead of the US$84 000. The investigating team found out that, rather a special full Council meeting was convened to deliberate on this matter, instead of Management and Housing Committee.

“The Special Full Council meeting turned itself into committee to deliberate on the issue. The Town Clerk recused himself from the meeting.”

Council agreed that Dube should repay in RTGS and offered 25 % discount.

The committee recommended that Dube make a full repayment of the US$84 000 loan without the 25% discount.