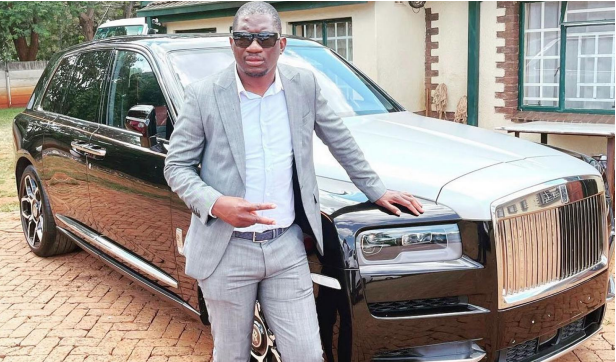 LOCAL Government minister July Moyo, who is entangled in Victoria Falls land scandals — with his ally mayor Somveli Dlamini currently out of jail on bail after he was arrested for a fraudulent land deal — is pressuring Zimbabwe’s tourism mecca to give prime land next to the luxurious A’Zambezi River Lodge to a company owned by gold baron Pedzisayi “Scott” Sakupwanya (pictured), BetterBrands Investments.

This comes as Moyo, together with Arosume Property Development, have been reported to the Zimbabwe Anti-Corruption Commission (Zacc) for allegedly corruptly cancelling a title deed belonging to Borrowdale resident Taruvinga Hamura.

The dossier on Moyo’s land activities was also sent to the Office of the President and Cabinet for President Emmerson Mnangagwa’s attention, his deputy Constantino Chiwenga, police Commissioner-General Godwin Matanga, the National Prosecuting Authority and Judicial Service Commission.

Moyo is pressing Victoria Falls city council to give the 7 000-square metres land to Sakupwanya’s company using political pressure and in violation to good governance tenets.

The pressure borders on corruption as the minister should not be lobbying for land for private companies and individuals for personal gain.

However, Moyo’s wish has not been granted. Council has told BetterBrands that it is unable to avail the land because it was being leased by another company, Wild Horizons, which has paid its rentals in advance. Investigations show that Moyo travelled to Victoria Falls on 20 September in a bid to bring political pressure to bear on the city council, currently led by town clerk Ronny Dube in Dlamini’s absence, to give the land to Sakupwanya’s company for private development.

Dlamini is out on bail on corruption charges relating to a residential stand which he allegedly bought fraudulently. Sources said Moyo slept at The Palm River Hotel, formerly known as Palm River Lodge, a four-star luxury facility located on the banks of the Zambezi River, when he visited the resort city to make a case for BetterBrands before Dlamini was arrested.

Dlamini, who is close to the minister, was arrested on 6 October. BetterBrands deals in gold and jewellery, but has a diversified portfolio which includes transport, energy, security services and real estate.

What makes the situation more complicated is that the land is currently occupied by tourism operator Wild Horizon, which owns and operates whitewater rafting, Zambezi boat cruises, Chobe day trips, helicopter flights and other adventure activities.

“BetterBrands wants that land, so Moyo has been pressuring Victoria Falls city council to give the company the property. Moyo came to town on 20 September to push for the deal,” a Local Government ministry official said.

“He slept at The Palm River Hotel and the following day he had meetings with Dlamini and Dube. After that, Moyo and Dlamini left, claiming to be going for a funeral without Dube. It later transpired that they had gone to mobilise war veterans and thugs to hound Dube out of office. Subsequently, the war veterans came to lock Dube out of his office. They even defied police who had told them that what they were doing was illegal.

“Three days before that, Dlamini had reported Dube to Zacc, accusing him of a number of alleged corrupt ac tivities regarding allocation of land and a deal with council for him to buy a car.

“The same letter was used to illegally suspend Dube for a short while before he was reinstated by councillors.”

In an unexpected turn of events, when Zacc went on to investigate Dube — who was reported by the mayor — they actually found it was Dlamini instead with a case to answer, not the town clerk. On 27 September, Moyo moved to quickly appoint a team from his ministry to investigate Dube who has been a stumbling block to his land deals with Dlamini.

Moyo appointed the team to probe Dube on various charges ranging from unprocedural allocation of land, withdrawing council money without authority, misleading council and incompetence, but a preliminary report did not find the town clerk guilty of any criminal offence.

Officials in the ministry said Moyo was so unhappy with the findings to an extent that he summoned the team for a meeting on 14 November and ordered them to rewrite the report, implicating Dube as he desperately wants him removed from his position.

Moyo appointed the team following a chain of controversial activities and clashes between the mayor and the town clerk, including a demonstration by war veterans in Matabeleland North and members of the Victoria Falls Combined Residents’ Association against Dube for alleged corruption in the sale of land.

In a spectacular boomerang, Zacc officials, however, arrested Dlamini for corruption after the investigation, while Dube was set free.

The ministry of Local Government however continued its probe, looking into five allegations: allocation of brewery stands to Jackleberry Investment without council authority; allocation of land in the dumpsite/landfill site and sewage pond area without council resolution; withdrawal of US$84 000 from a council account; misleading council in awarding the tender for sale of stand number 8300 to Zambezi Properties; and incompetence, dereliction of duty and failure to supervise staff.

The minister’s investigation team produced a preliminary report which did not find Dube guilty, although it highlighted administrative lapses.

The report was submitted to the minister, but he was unhappy as it did not nail Dube. As a result, the minister ordered his investigation team to doctor the report to suit his design — finding Dube guilty — to remove him and pave way for his land deals.

Another probe into AK-47 arms saga